My husband has been working so hard this summer, usually more than 40 hours per week, 6 days a week. And that’s just at his job; that doesn’t count the hours he’s been putting in working on the sailboat (I think he may have managed to get 15 hours in at the boat this past week!). He usually works Monday- Saturday, so I spend most of my Saturdays by myself. I go for a run, putter around the house, watch bad TV, do household chores, and bake bread.

So, when Chris told me he had this past Saturday off work, I was very excited. I’ve been feeling sort of wanderlusty lately, and I decided I wanted to go on an adventure of sorts.

It didn’t take much persuading to get Chris to agree to spend the day exploring Tangier Island with me. 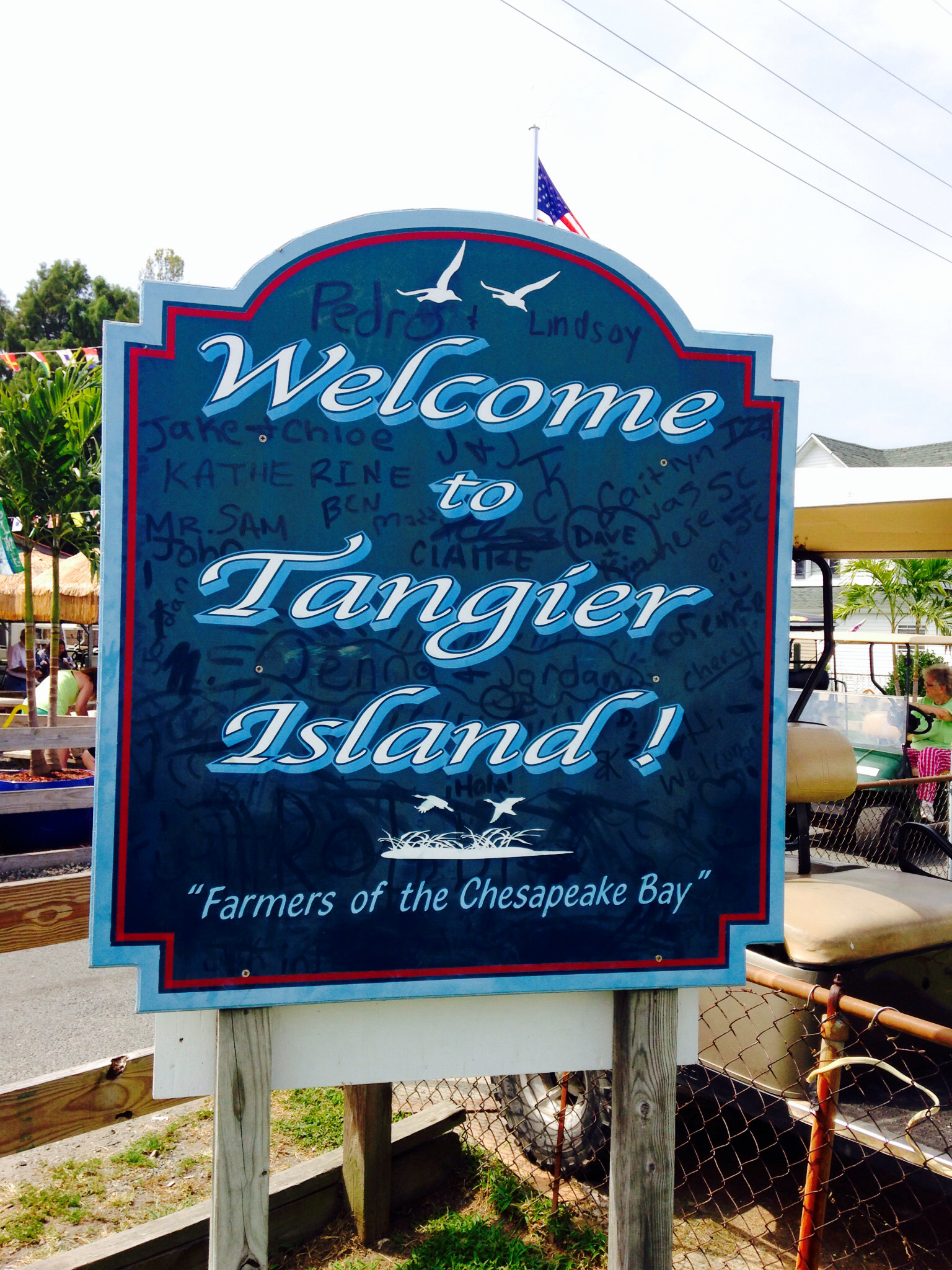 Tangier is pretty much smack-dab in the middle of the Chesapeake Bay, halfway between the Western and Eastern Shores. It is only accessible by boat or plane. The island’s residents (500 of them) make their livings mostly from catching and shedding blue crabs. The island has very few cars; most people use boats, golf carts and bicycles as their primary means of transportation.

On Saturday, we got up early, had breakfast, and then set out for Reedville, VA to hop on a ferry to Tangier Island. 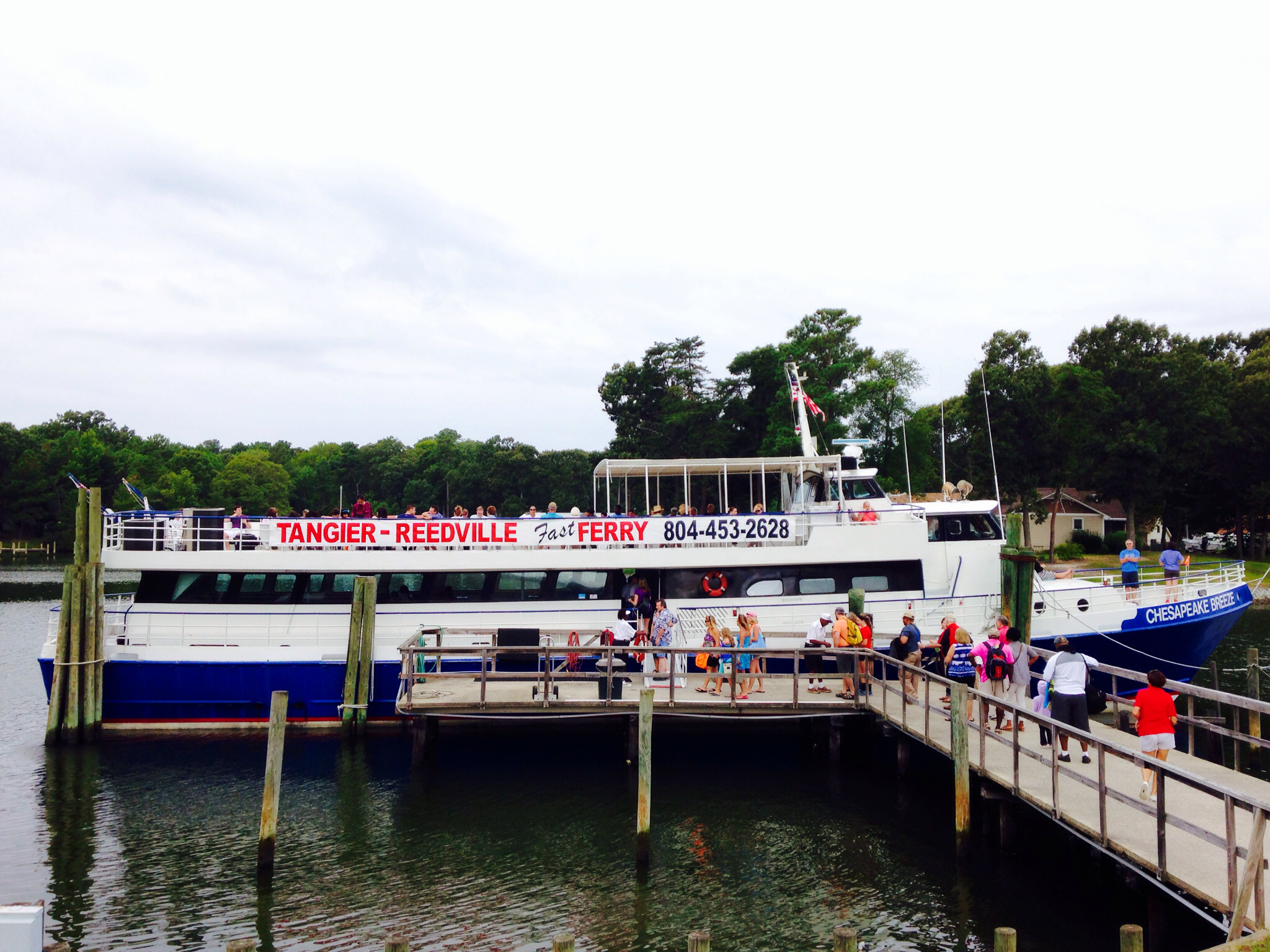 The ferry ride was close to an hour-and-a-half. We both stood out on the bow for the entire trip out. The morning was gorgeous. It was a little overcast and the wind was cool, and sailboats dotted the horizon. The bay is so big, and I couldn’t help but think of the people exploring it in canoes and wooden ships hundreds of years ago; they must have been very brave. 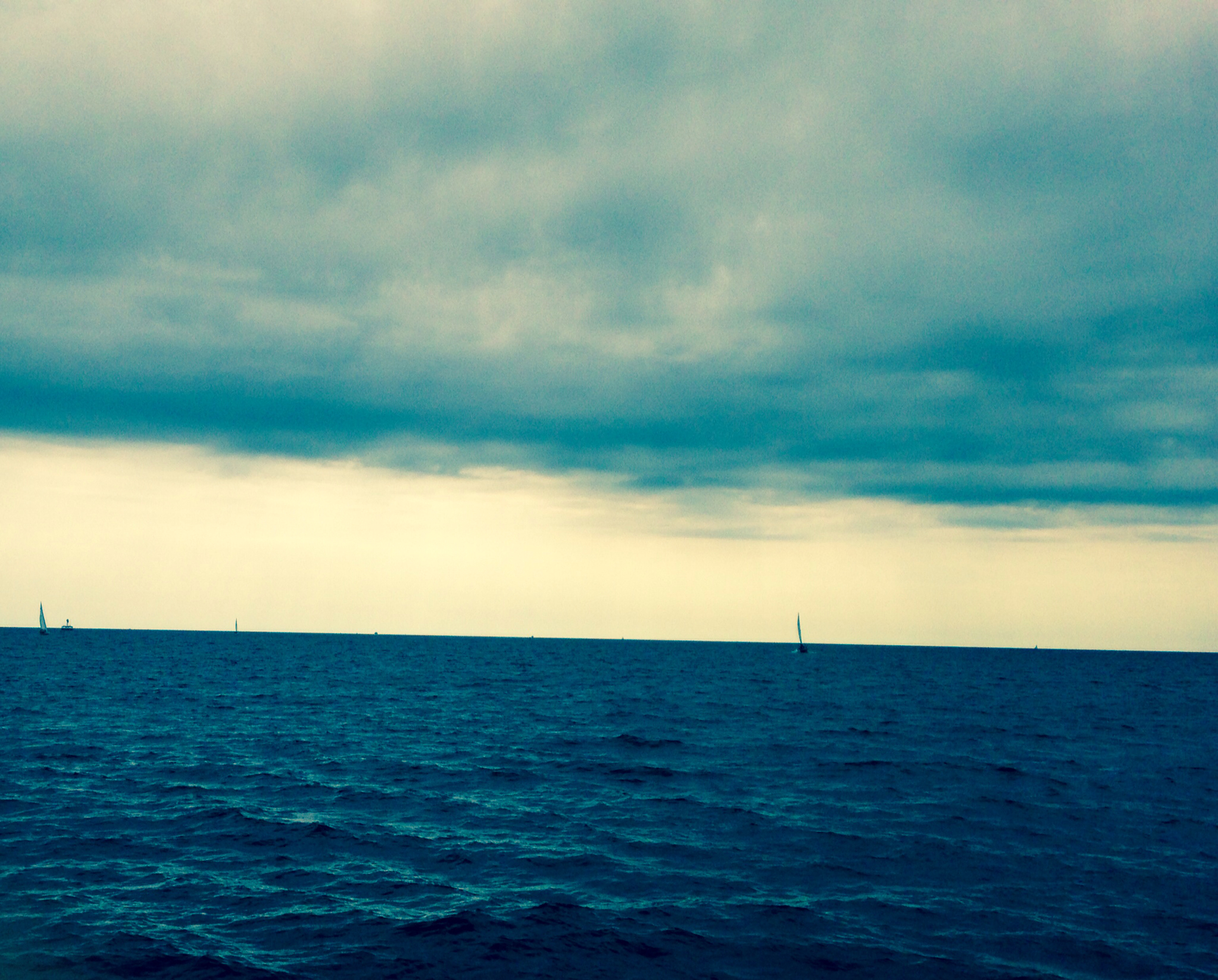 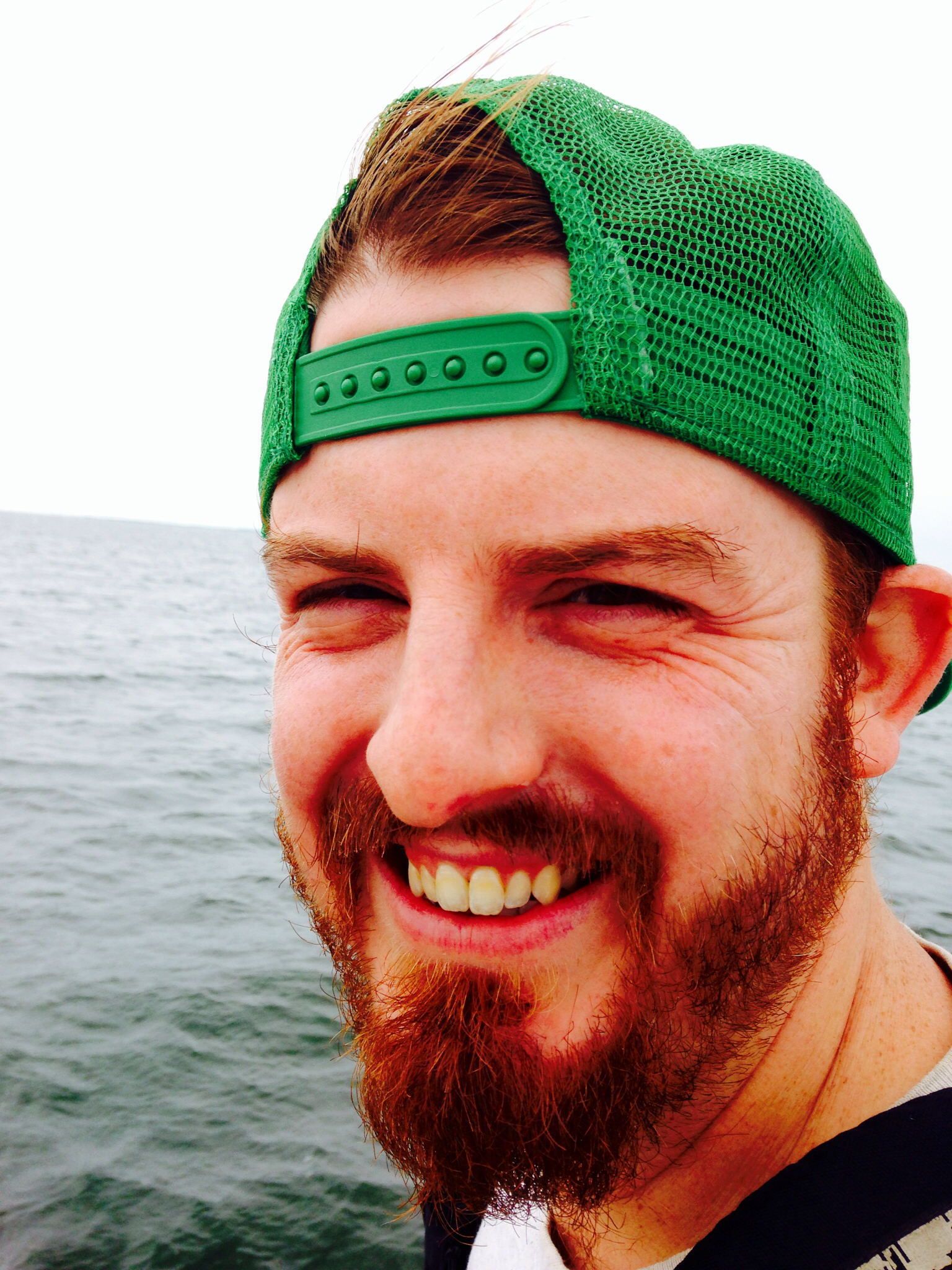 Chris spotted the island before I did; his eyes are much better than mine. 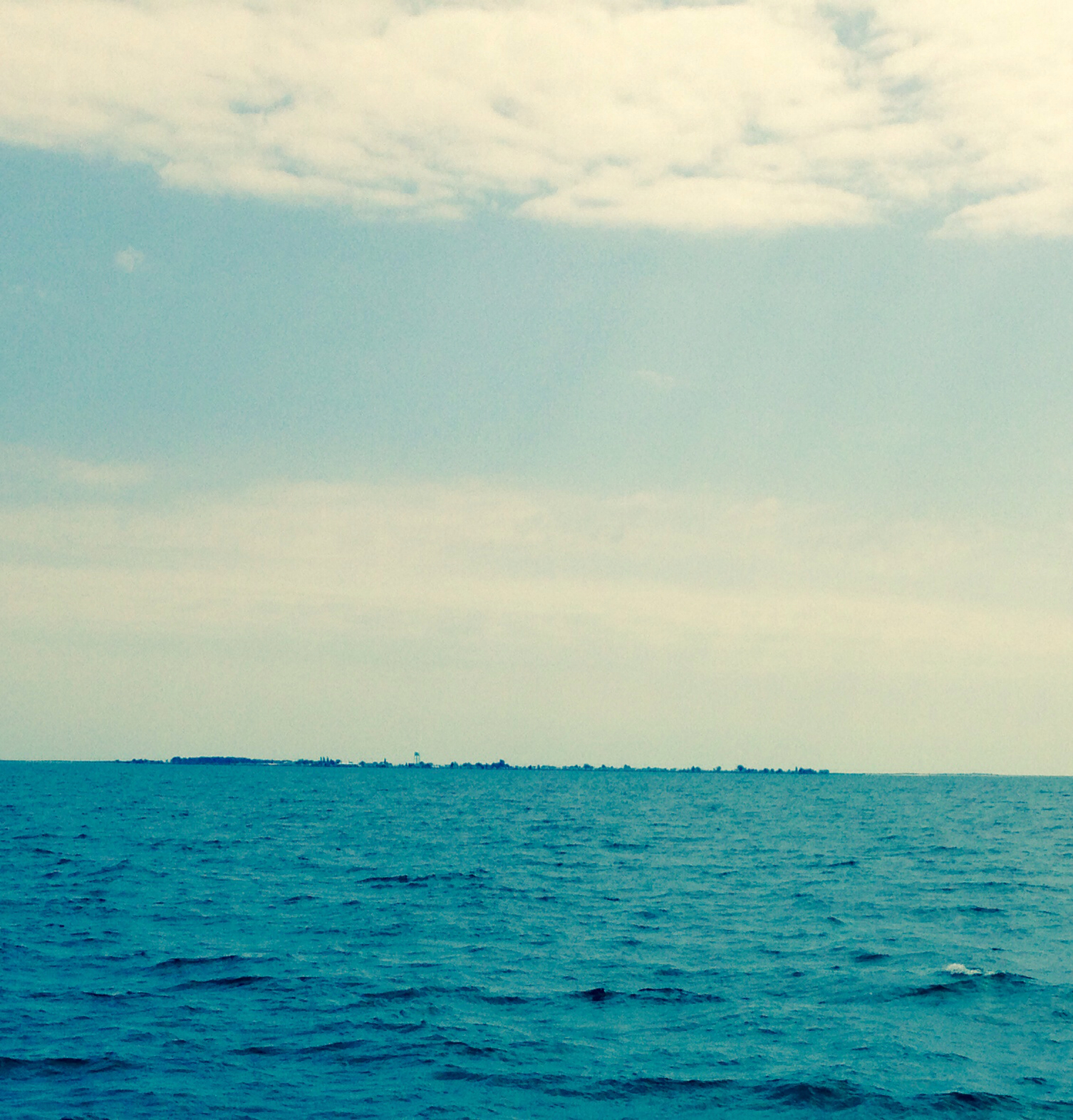 The ferry slowed down as we pulled up (or in?) to the island. There were crabbing and fishing boats on either side of us, many pulled right up to crab shedding houses. 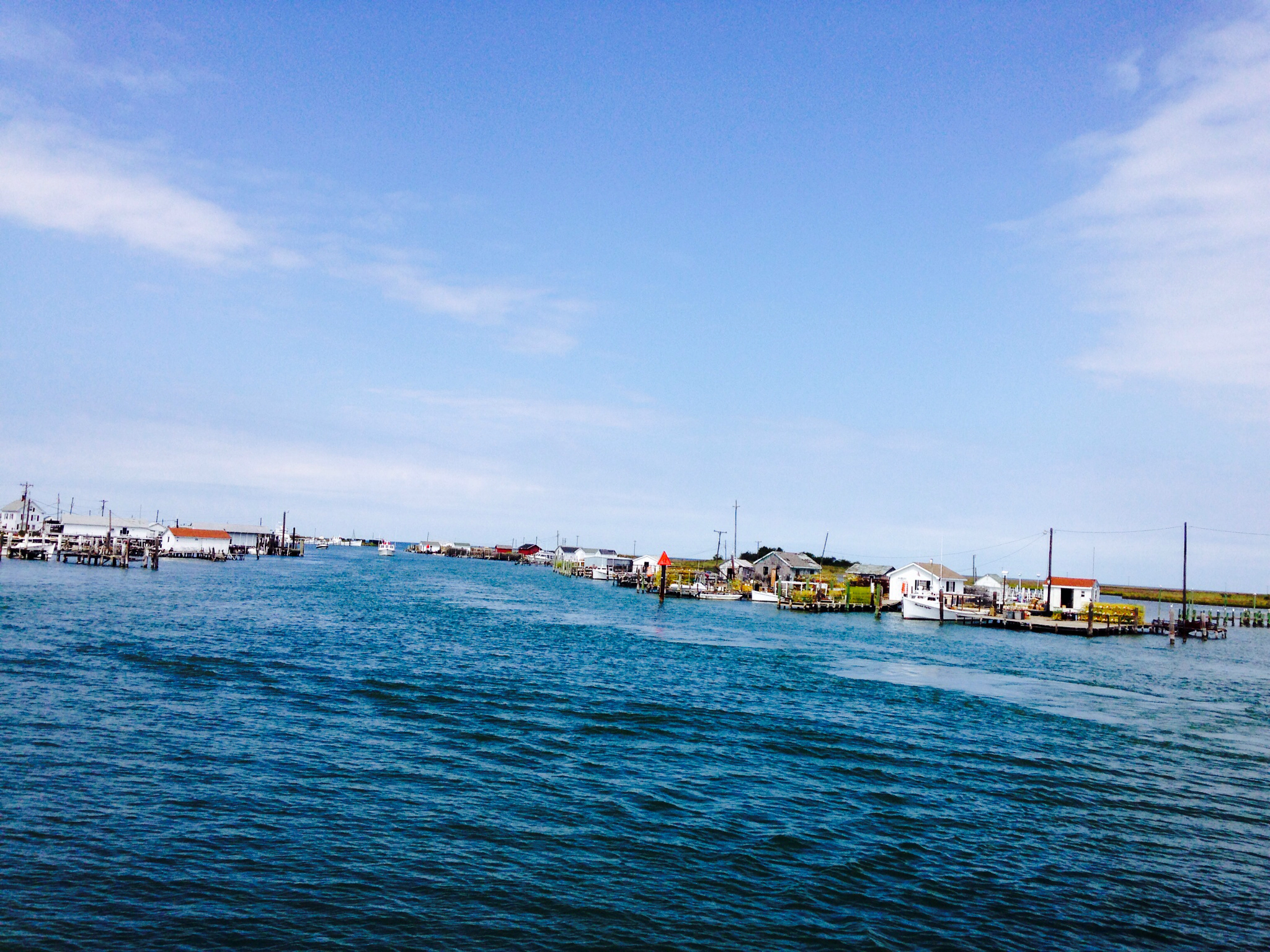 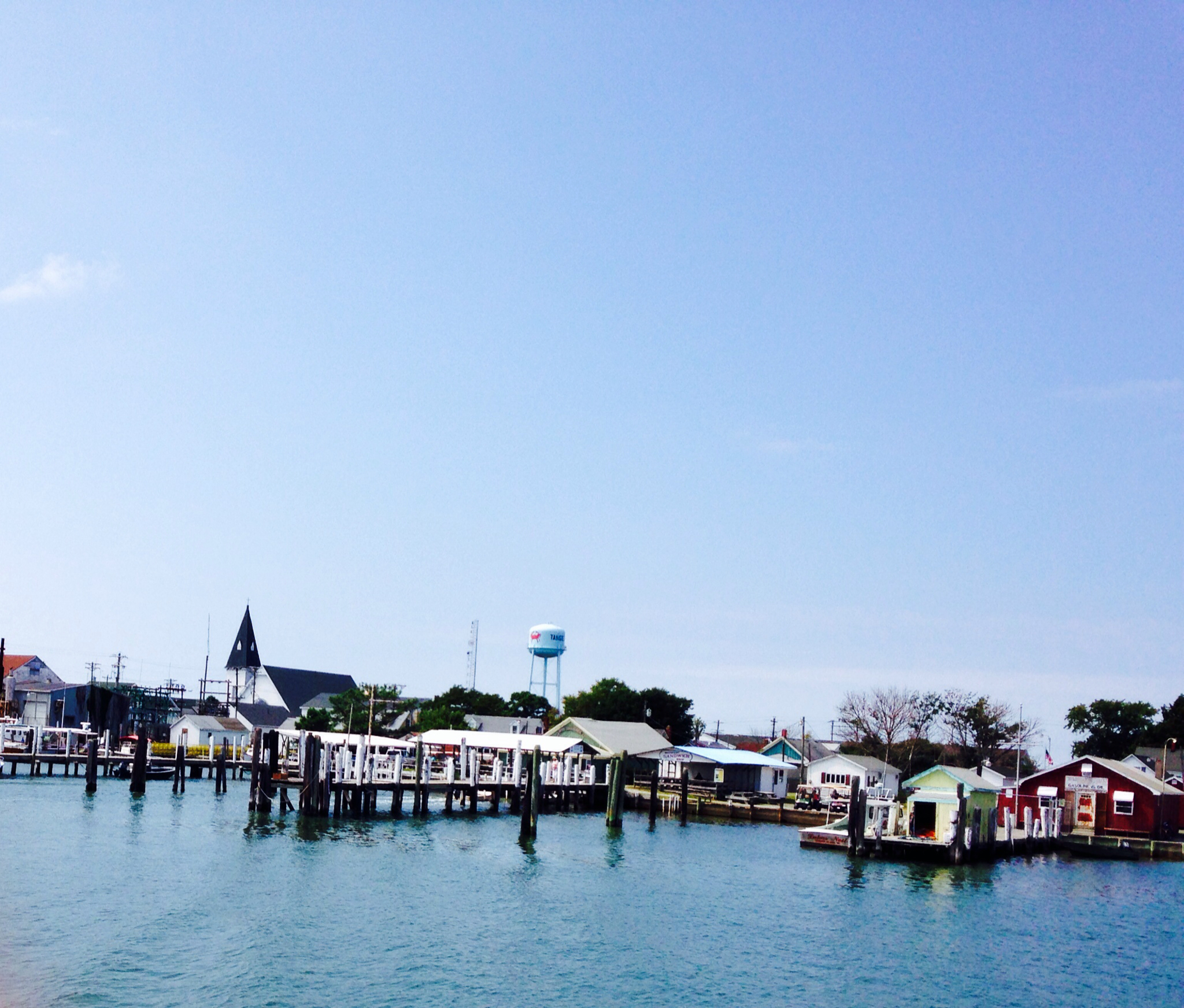 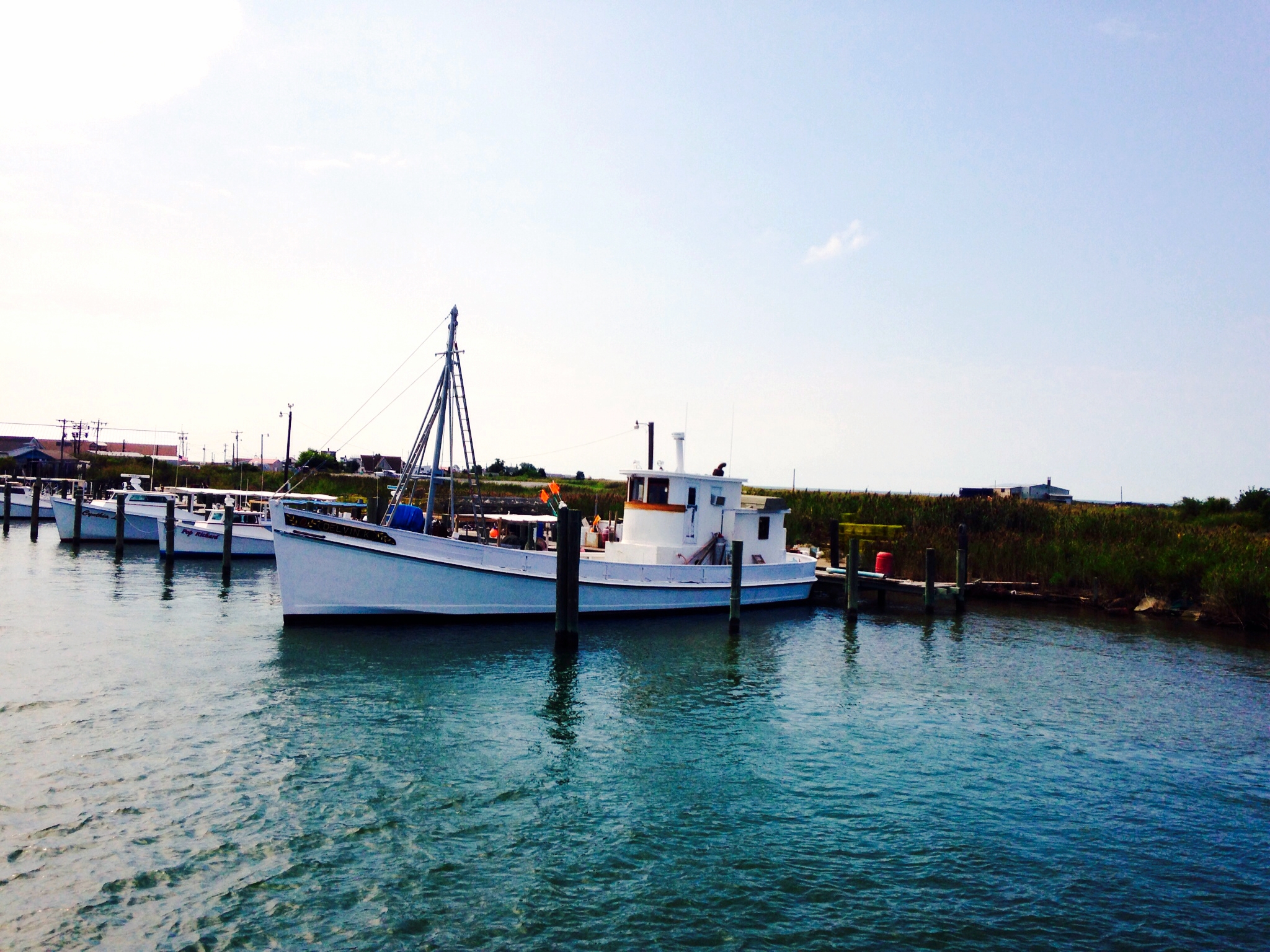 As we walked down the gangplank, many of the island’s residents swooped in with fliers for their restaurants and other businesses. We had worked up quite a hunger, and decided on a restaurant called Fisherman’s Corner. I had a wonderful crabcake sandwich, and Chris had the Seafood Medley- a plate filled with oysters, clams, a crabcake, fried softshell crab, etc. I’m not sure I’ve ever seen him eat so fast. 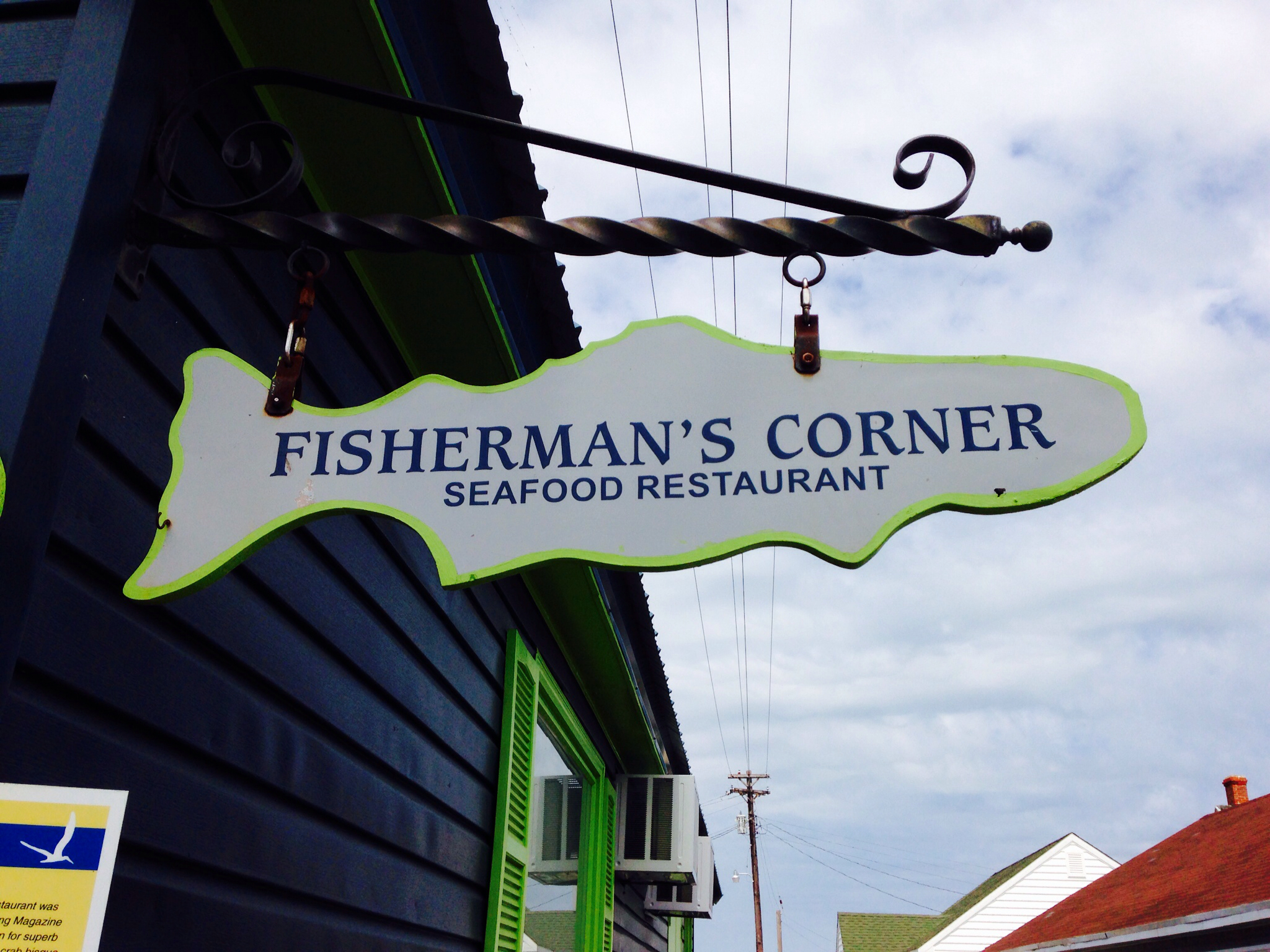 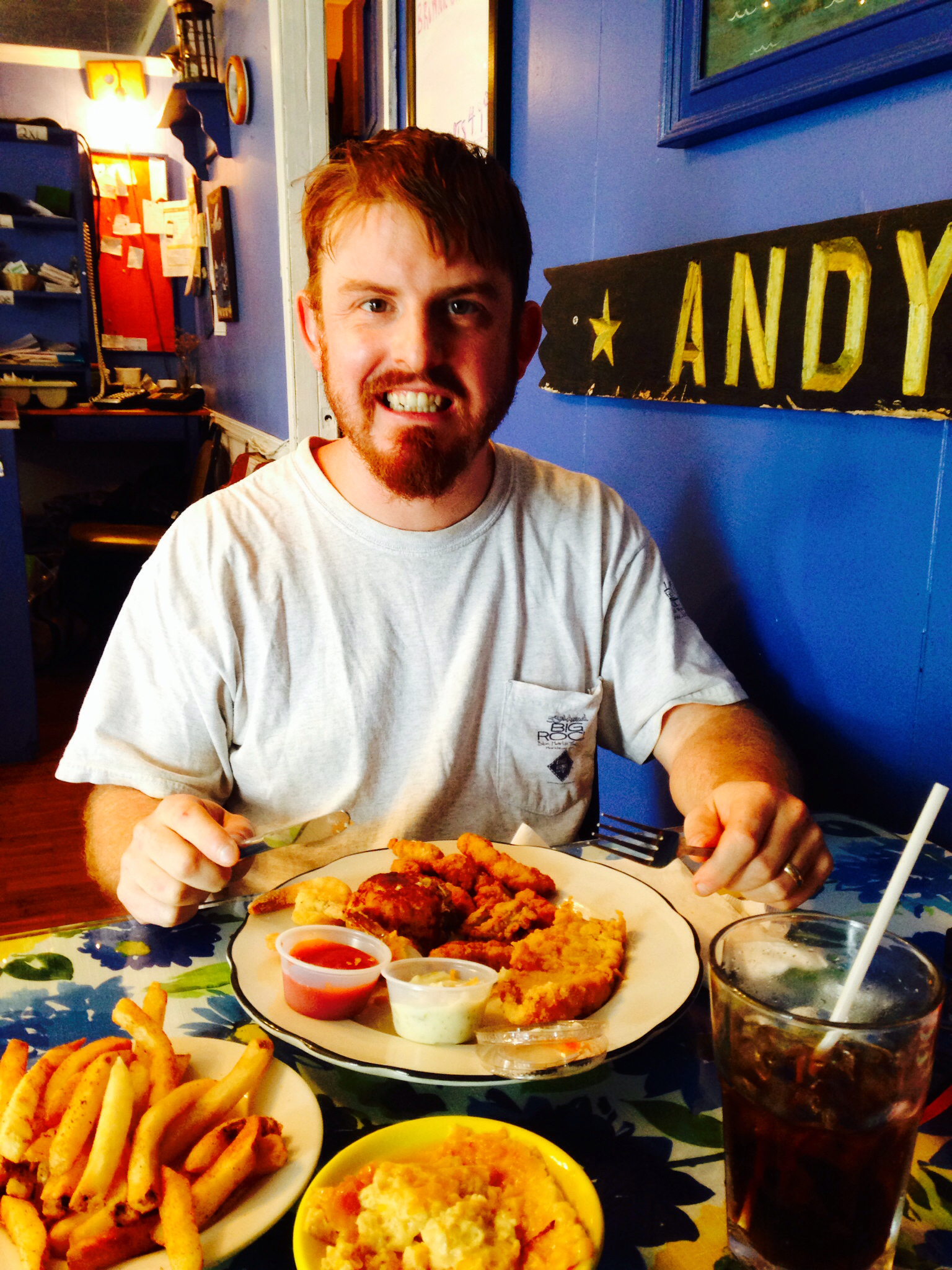 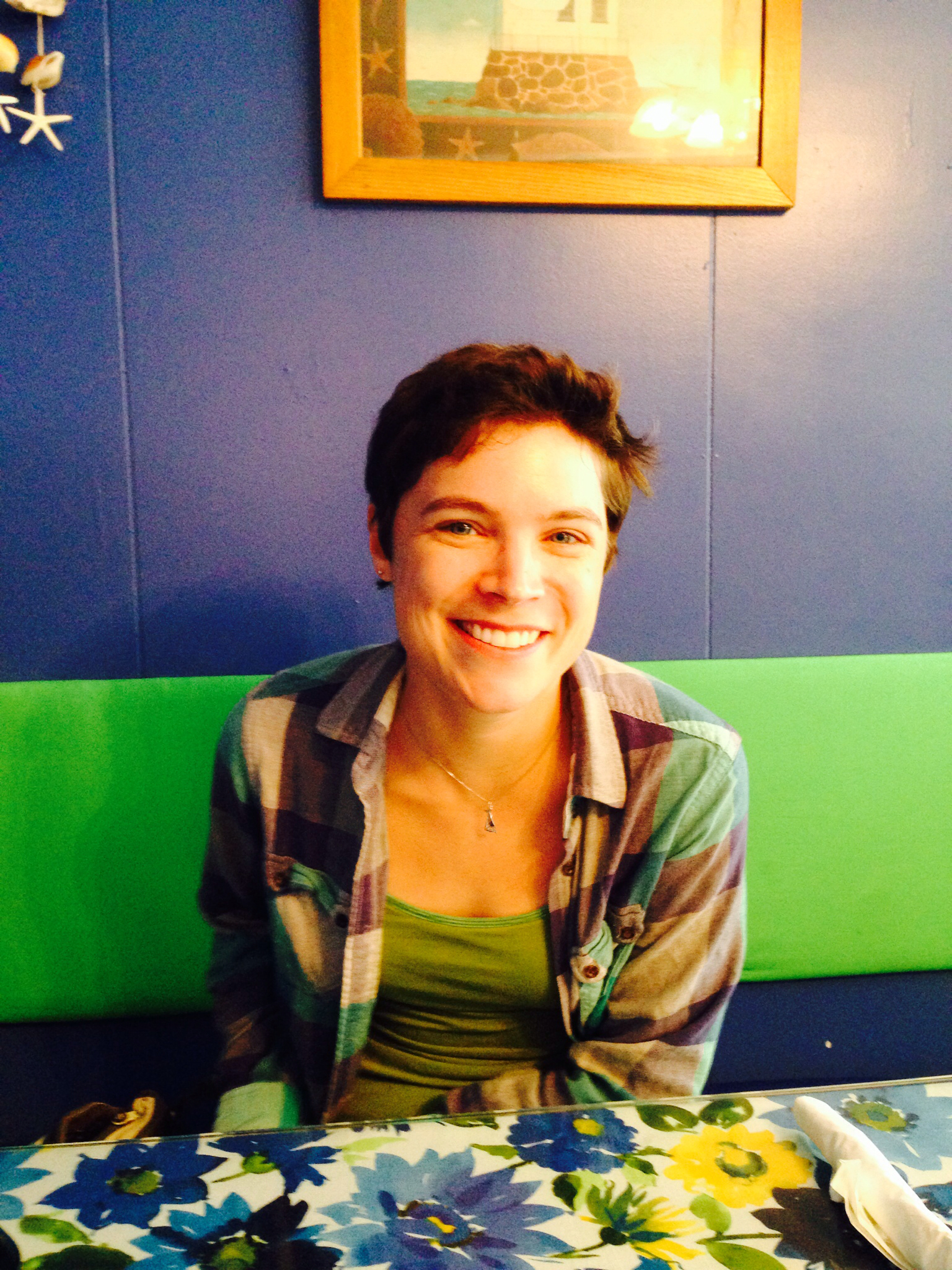 Then, we rented a bike. 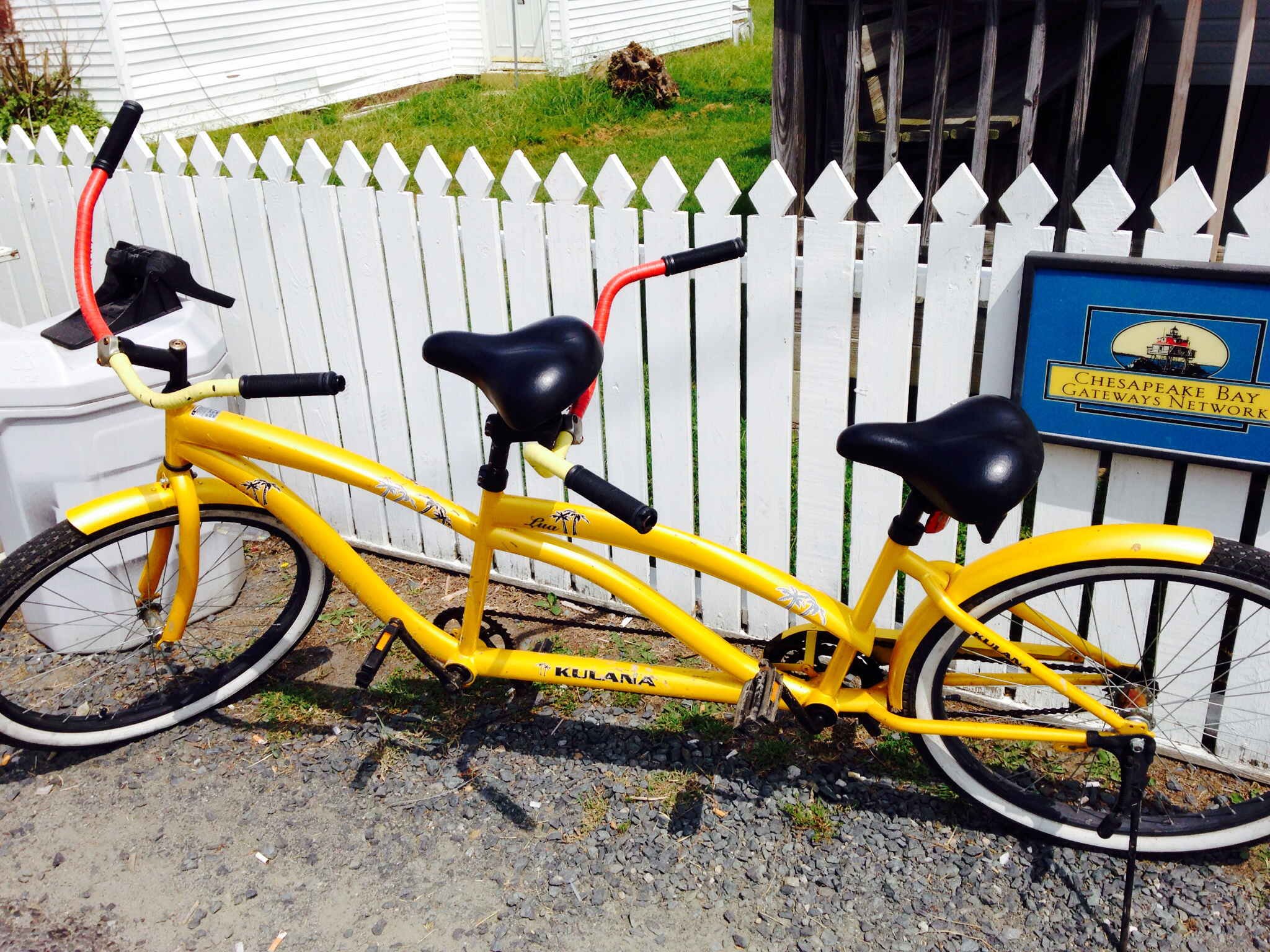 Neither of us had ever ridden a bicycle-built-for-two, and we thought it would be fun to see the island on wheels. We had a couple rocky starts, and nearly got run down by several golf carts, but we were able to cover pretty much every inch of the island together. I think my favorite part of the day was when Chris took selfies of us while we were pedaling down a tiny street. He also managed to get some great photos of the island as we rode. 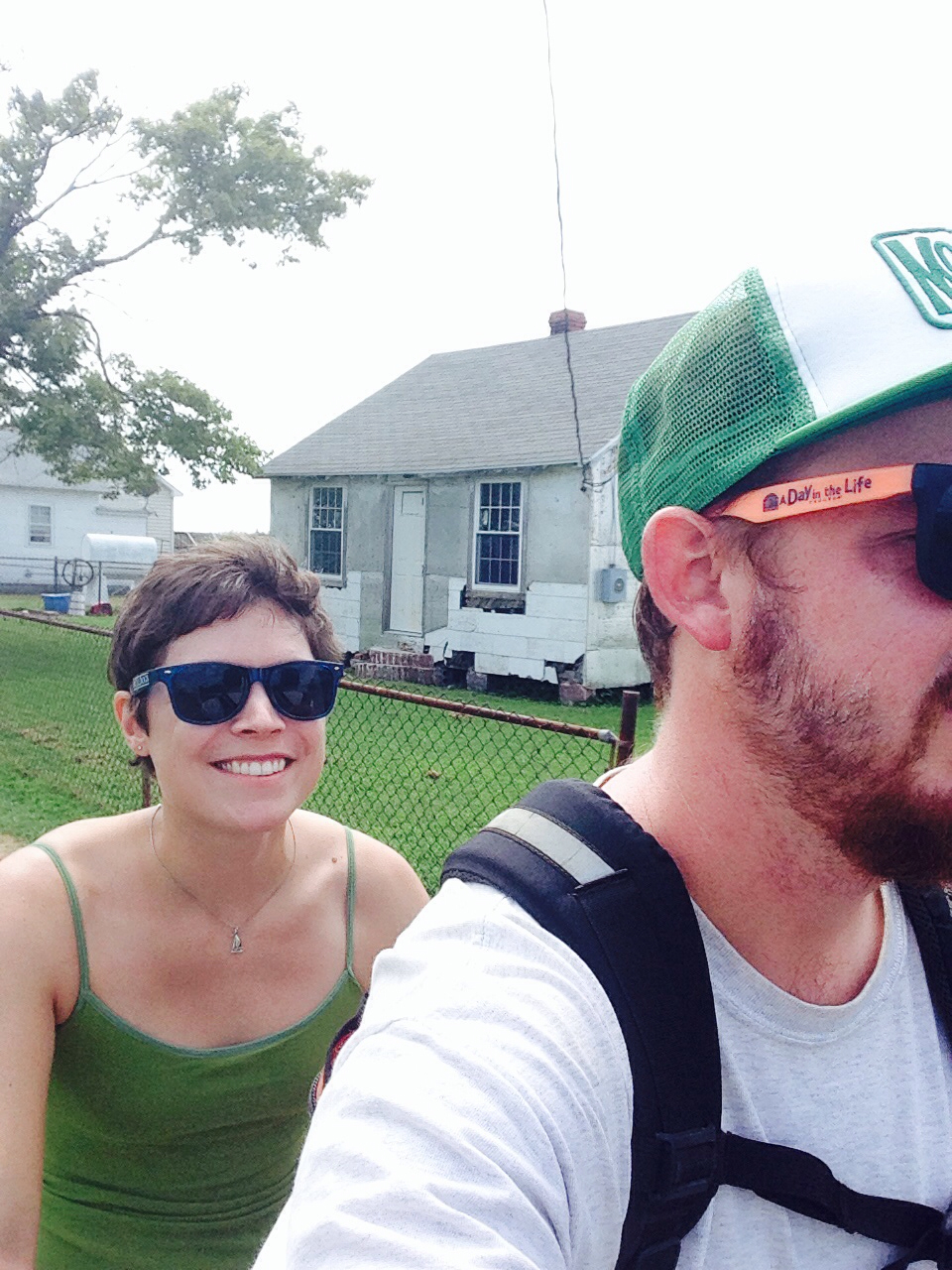 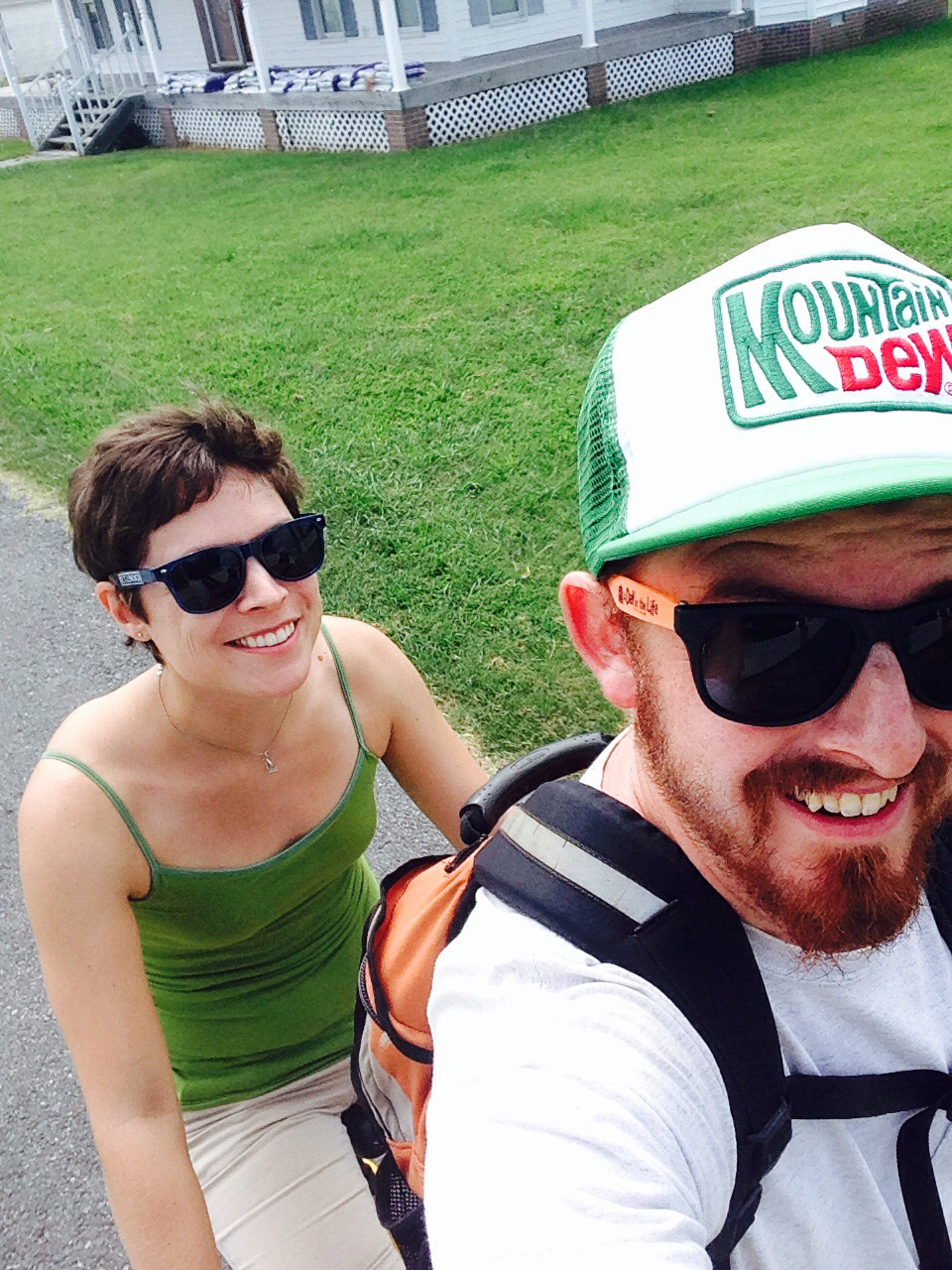 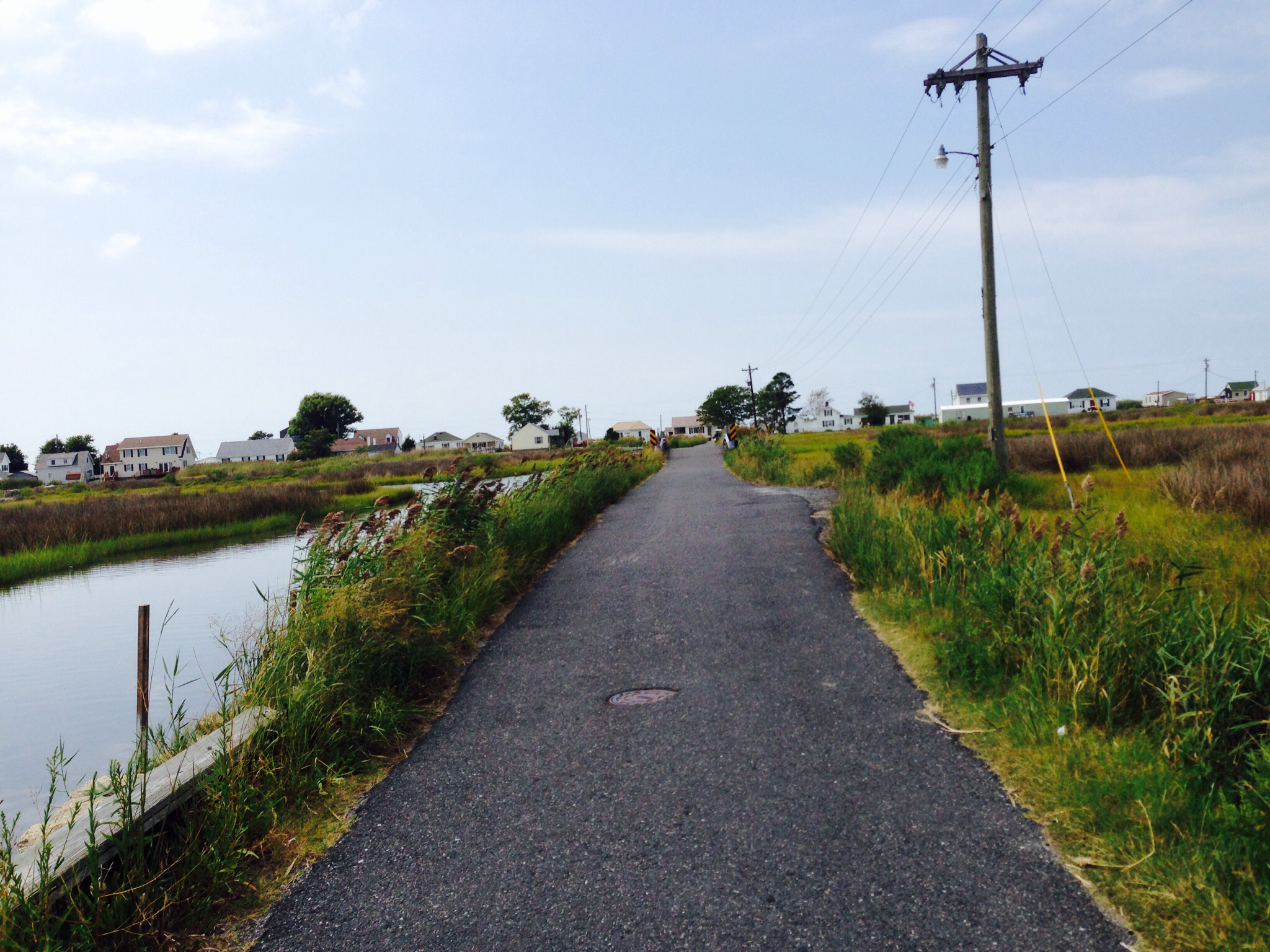 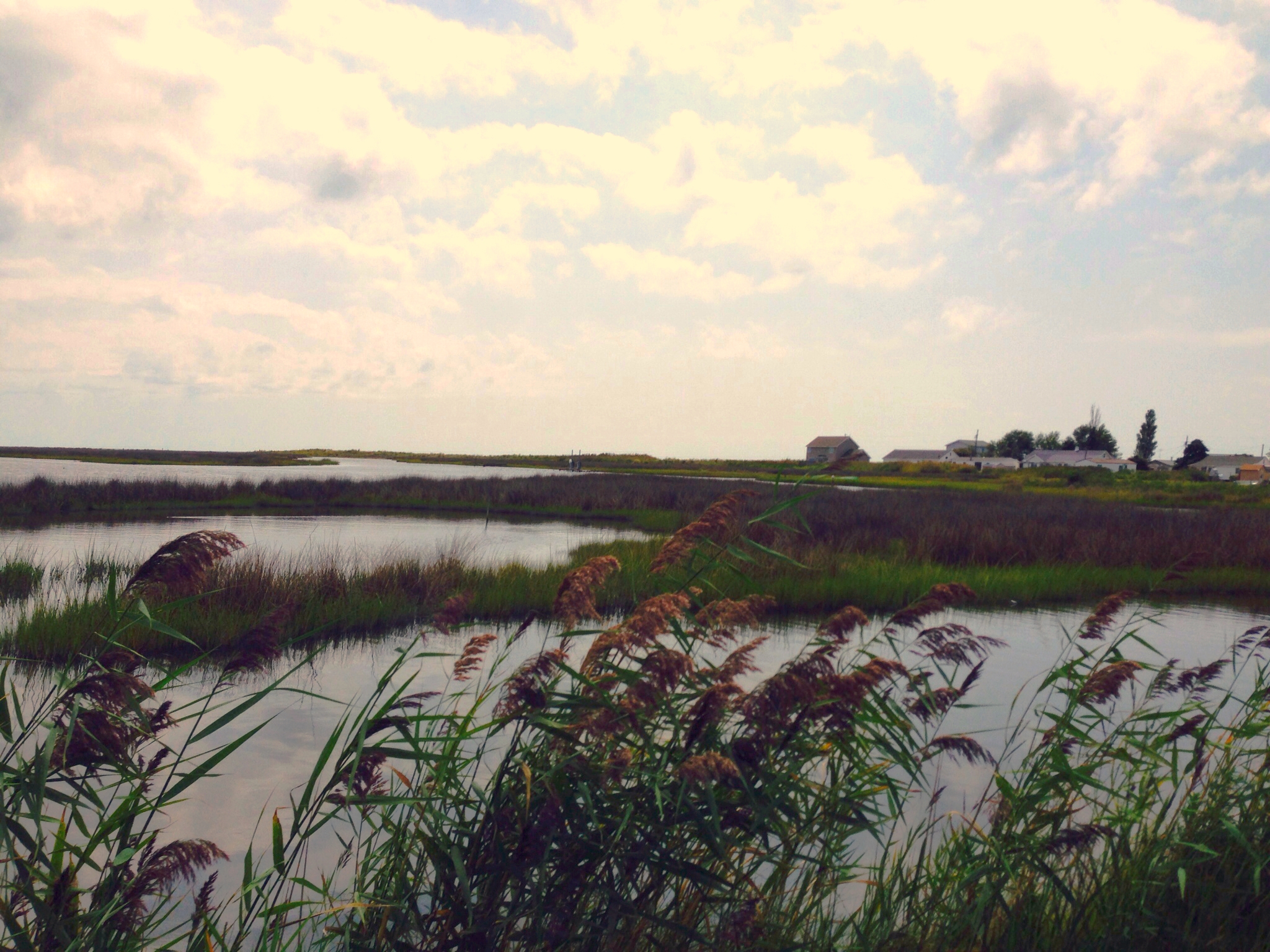 We visited the Tangier Island museum, where Chris found Bubba. 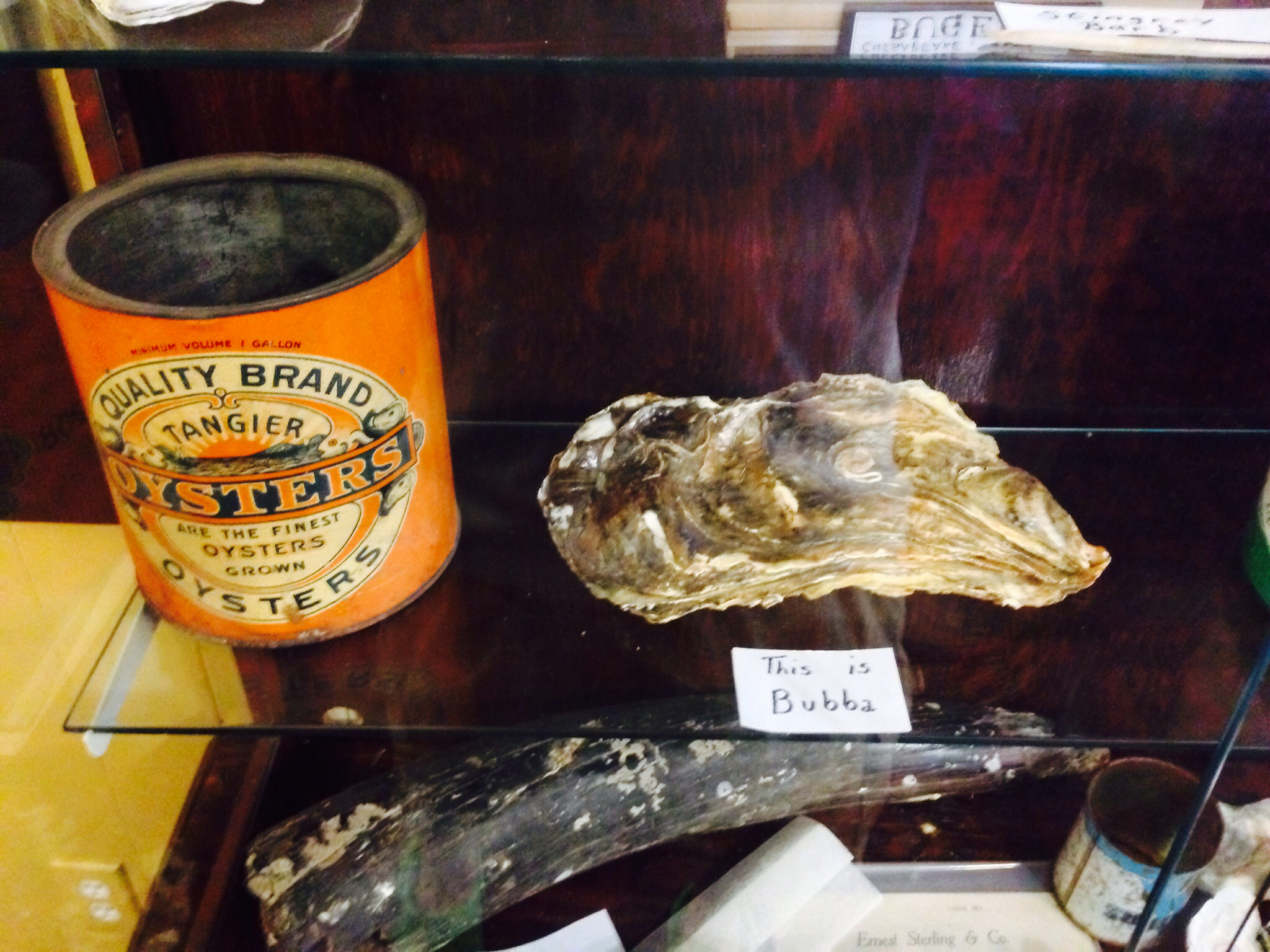 Now, it’s hard to tell in the photo how big Bubba is, but that can next to him is the size of a paint can, for reference. Bubba was one big booger.

We rode around a little more, and then it was back onto the ferry. We sat in the shade on the way back, and Chris took a nap while I just watched the water go by and enjoyed the cool breeze. I felt truly relaxed.

I’m not sure I could come up with a list of adjectives that adequately describe my impression of Tangier. It’s beautiful but strange. I’m glad we went.

I also think I just felt very grateful to have a day with my husband out on the beautiful Chesapeake Bay, which is practically in our backyard. We don’t take enough advantage of living where we do. 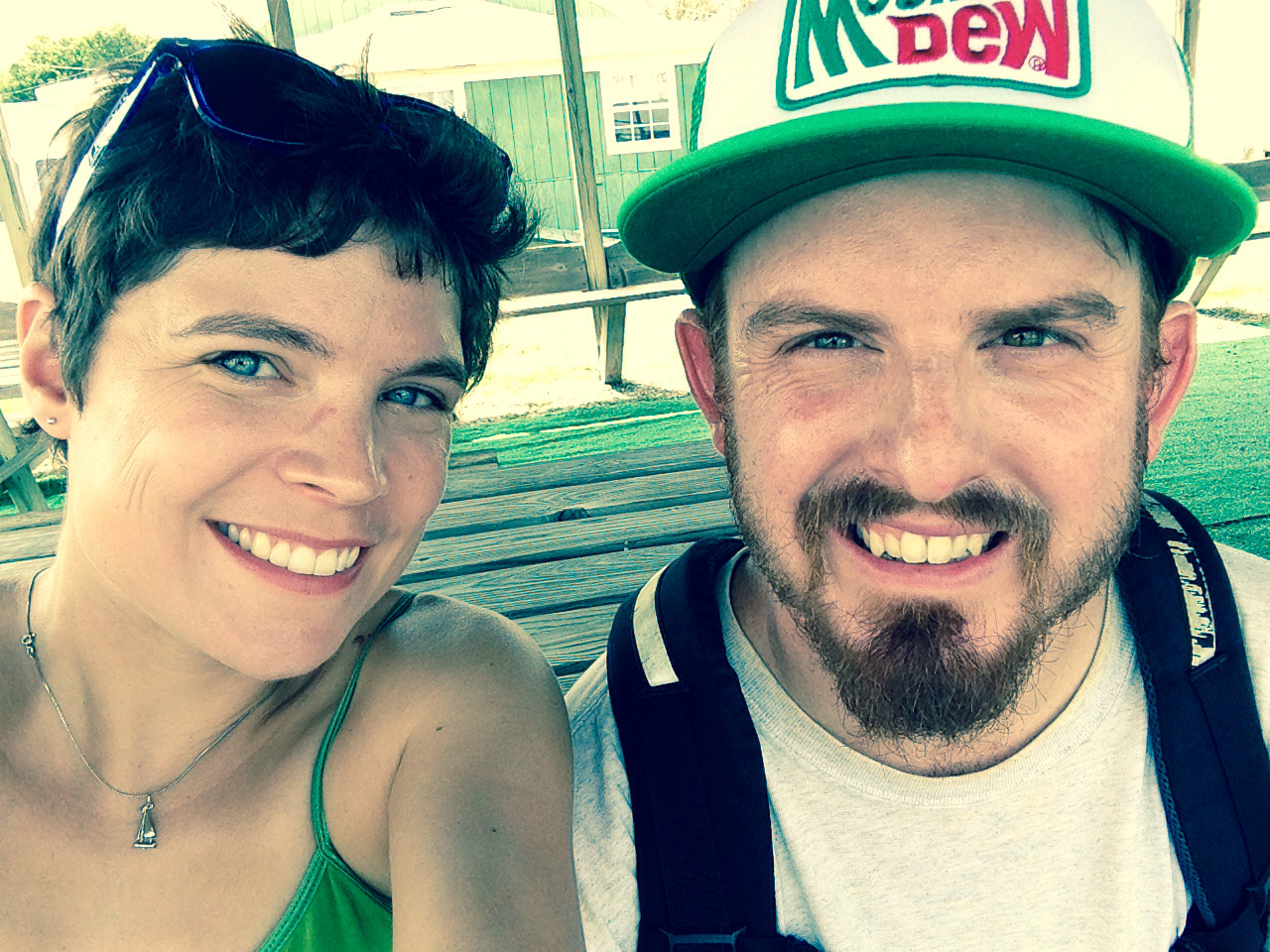 Hopefully, once the sailboat is back in the water, that will change. 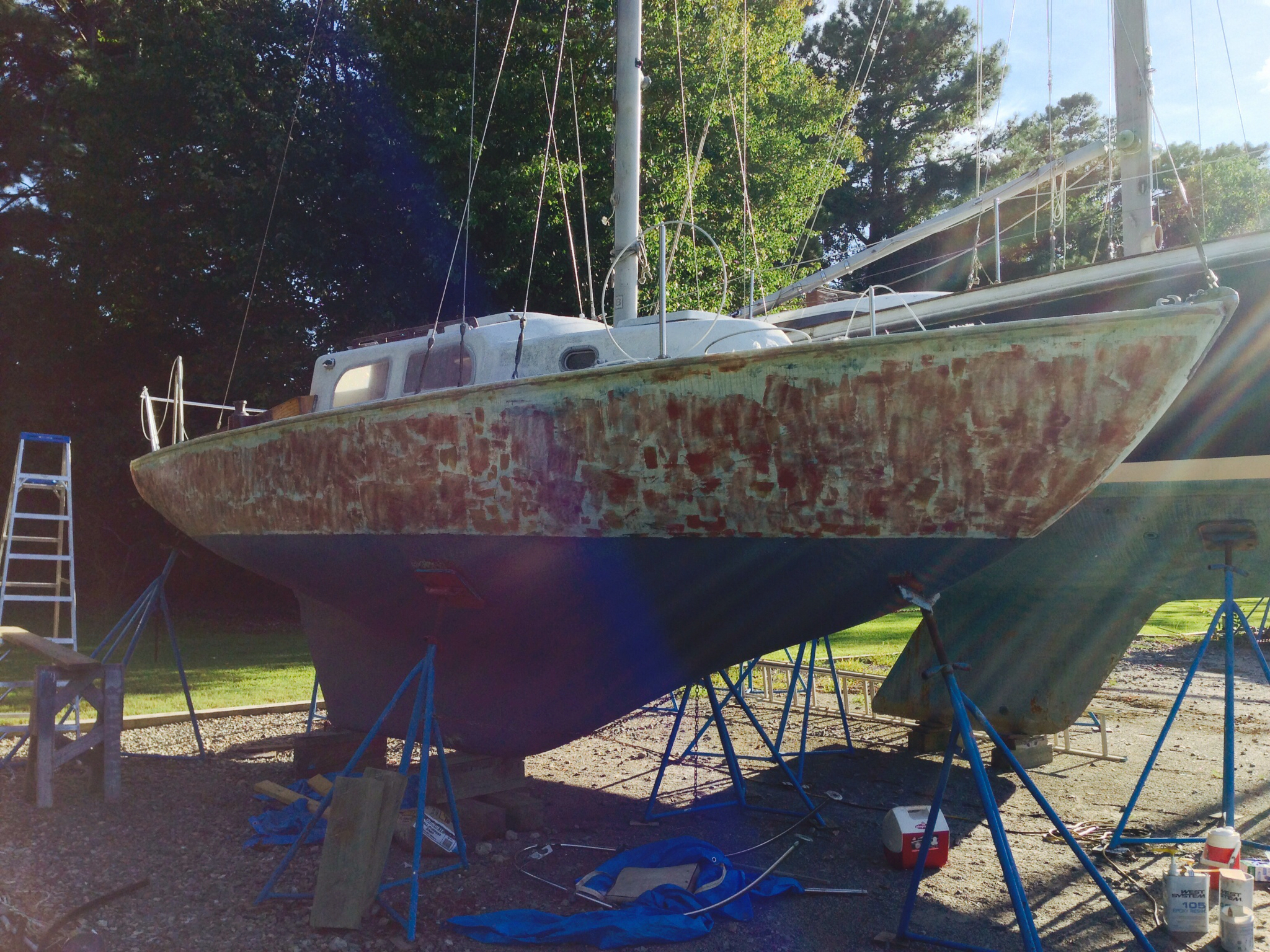 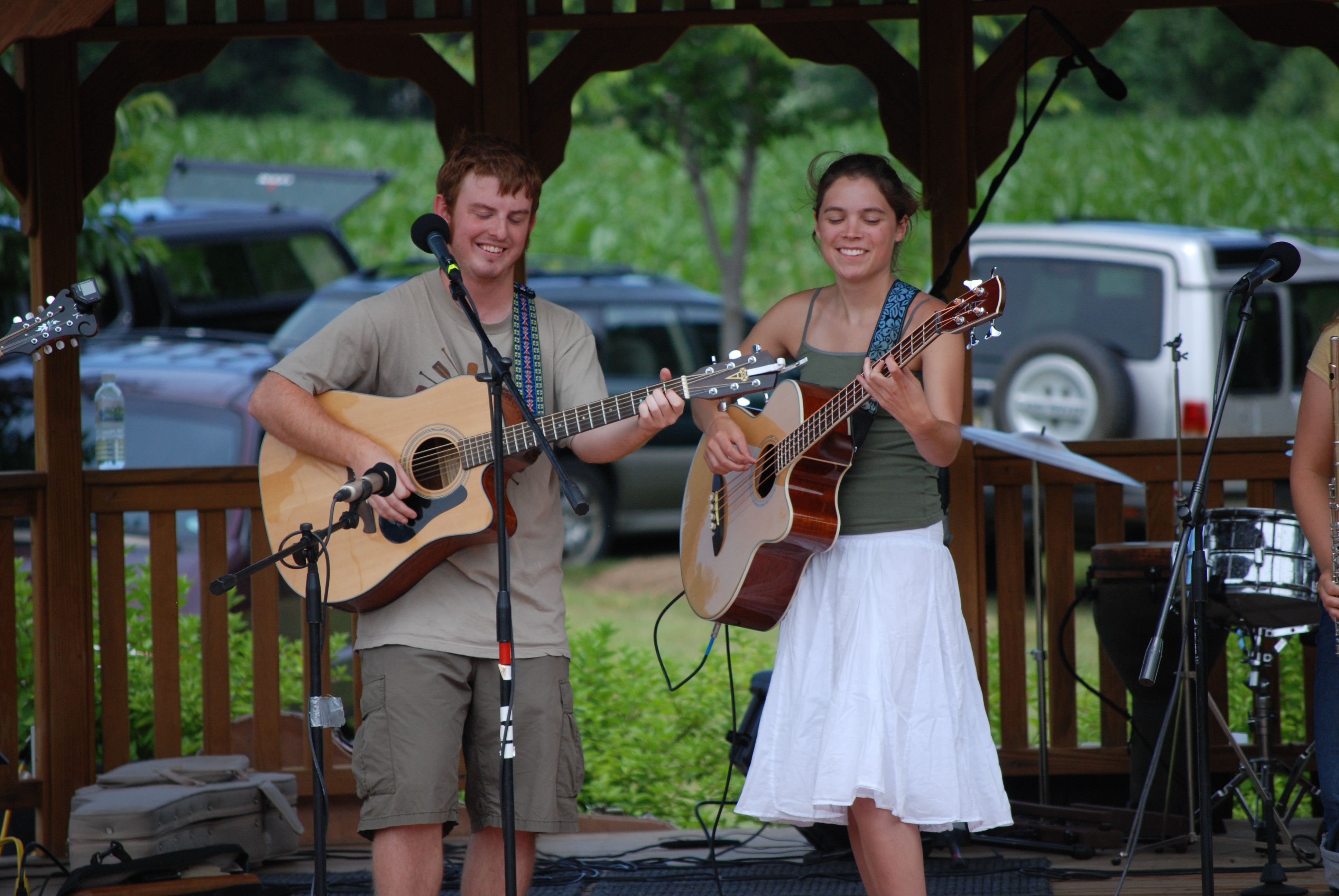 Here’s a video of us playing some music together. Hope you like it.

Yet another boat-yard colloquialism reminiscent of the interrogation techniques of the Spanish Inquisition. It is common knowledge that the inboard diesel engine’s primary function is to serve as a sink for time, energy, and money, and in return occasionally propels the boat. With that in mind we decided to rip ours out. 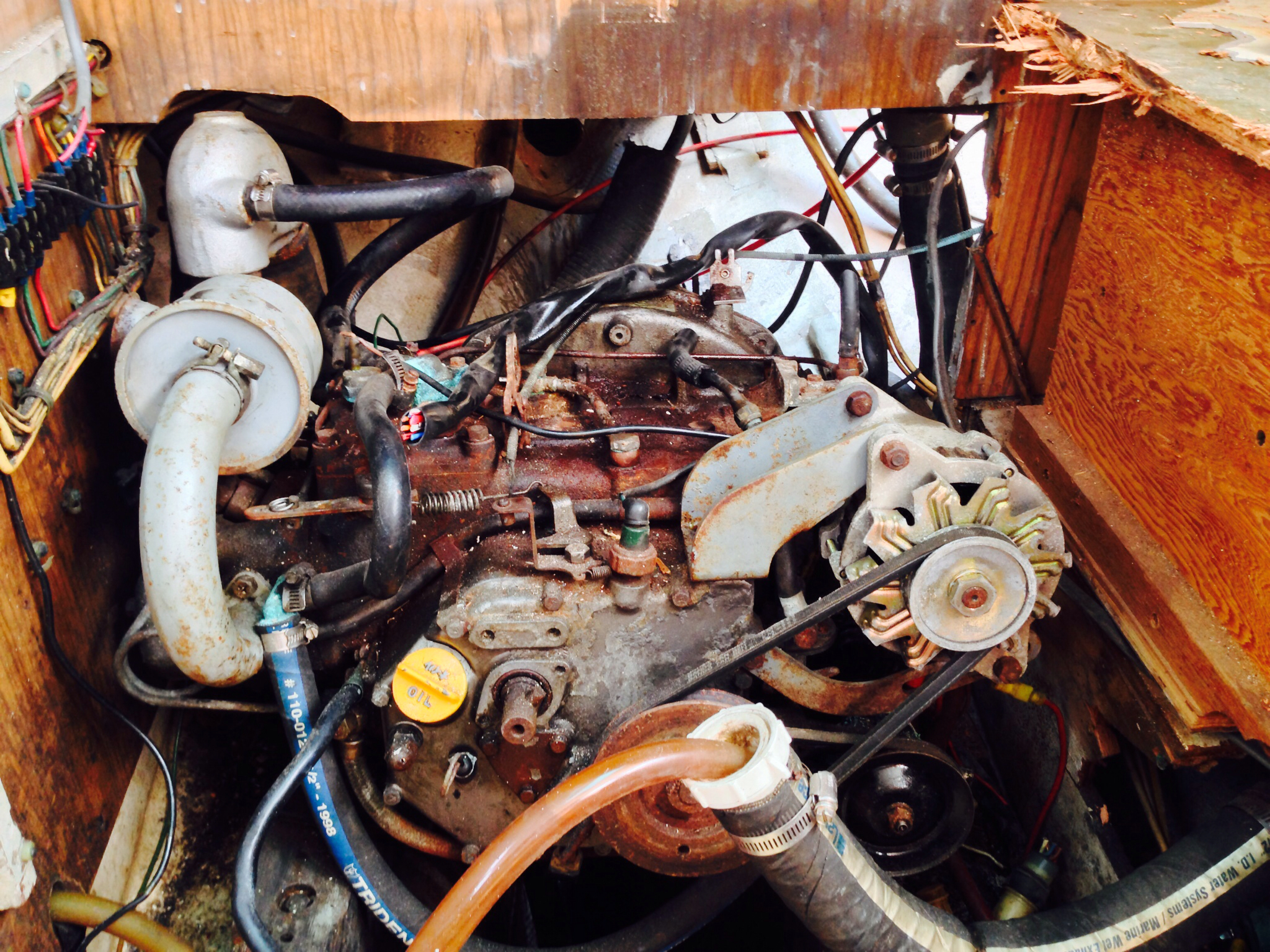 Allow me to explain.

After 1.5 months at the machinist, the rudder post has apparently been rendered un-weldable by 40 years of submersion in salt water. I have been rendered angrier and poorer, thus the earlier angsty-myspace post. So in the process of planning out a new approach to building the rudder, I realized that it made sense to handle the worn cutlass bearing before re-attaching a hypothetical new rudder. With me?

The cutlass bearing is the metal bit which the prop shaft is encircled by where it exits the hull. I think. 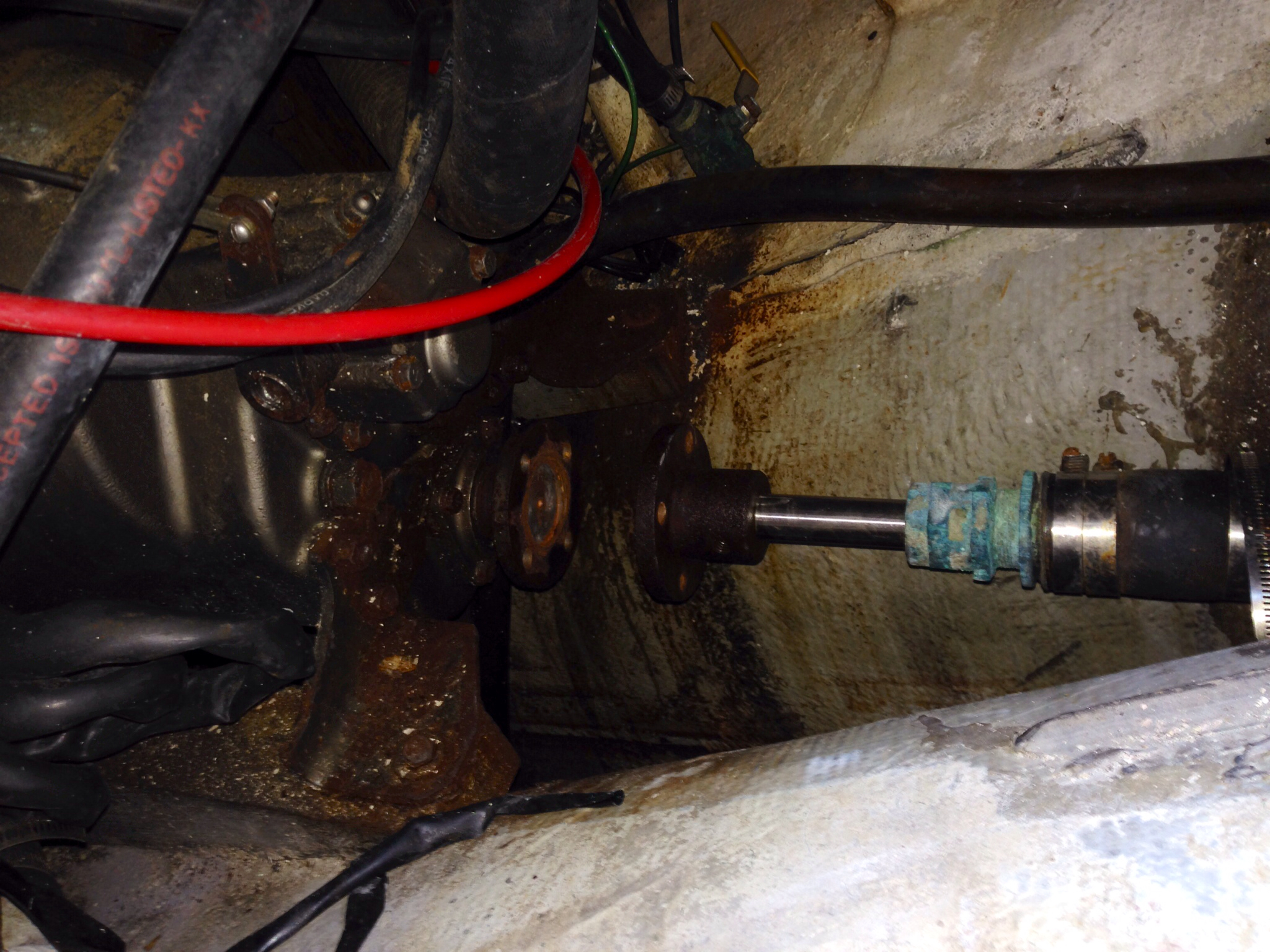 That greenish bit there is the cutlass bearing. (If you look closely you can see the prop shaft flange freed from the drive shaft of the engine. I apologize for the poor picture quality, these were taken upside-down.) In the process of rooting around in the bilge I got a good close look at the engine and I began to get nervous. I believe the engine was installed in 1983, and by all appearances has been largely ignored since then. It did fire up (with a little coaxing) when we first purchased the boat, but this past week I  came to the decision to rip out the old diesel engine. The reasons are legion: 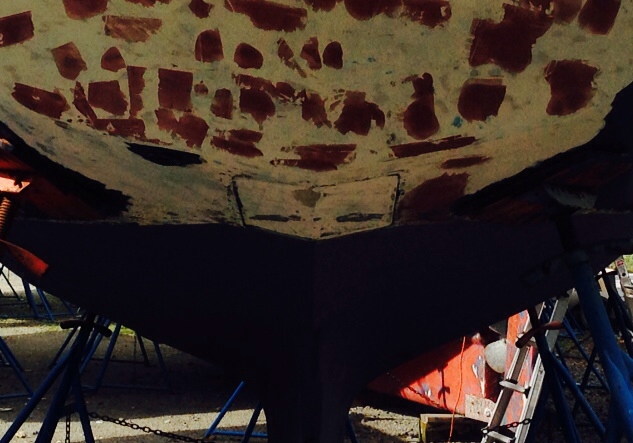 2. The Ariel was not designed to have an inboard-engine. The diesel was added 20 years after the boat was built, and it was really shoe-horned in there. In order to access the engine to work on it you have to either shimmy through the cockpit lockers and squeeze under the cockpit-sole, which leaves only enough room to use your left hand, or rip out the sink. 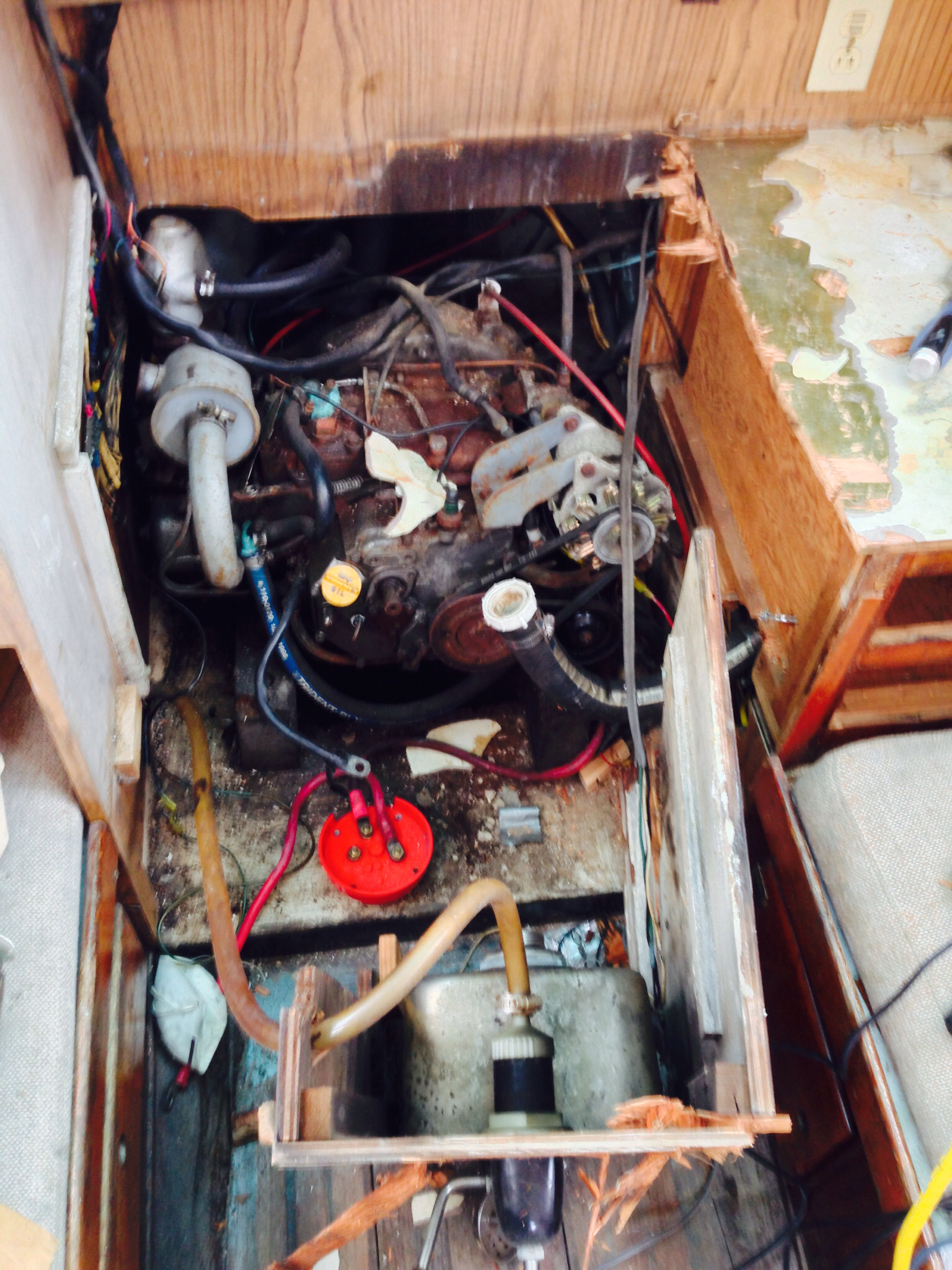 This boat used to have a sink

3. Performance- I’ve read that the drag on a fixed prop and prop-shaft is equal to the drag of the rest of the hull combined. By removing the prop we stand to gain boatspeed. We’re also removing the dead-weight of the engine (~150 lbs) as well as the compensating ballast that was put up forward when the engine was installed. (?lbs)

4.  Storage- the engine with it’s associated cables, tubes, tanks, bells, and whistles takes up the entire aft section of the hull- we can store sails or any number of things there which otherwise would be tossed up in the v-berth.

5. Simplicity- An outboard gasoline engine is smaller and simpler.

So today I cut the various supply lines and unbolted the engine from the bed- I was pleasantly surprised to find I can muscle it around a bit without too much trouble. Hopefully within the next week I’ll have a friend come by and help winch-lever-haul the iron genny out of the boat for good. Anyone interested in purchasing a used engine?

…everything looks like a nail.  Or as is more often the case, when the only tool you need is the one you don’t have, there is much wailing and gnashing of teeth. 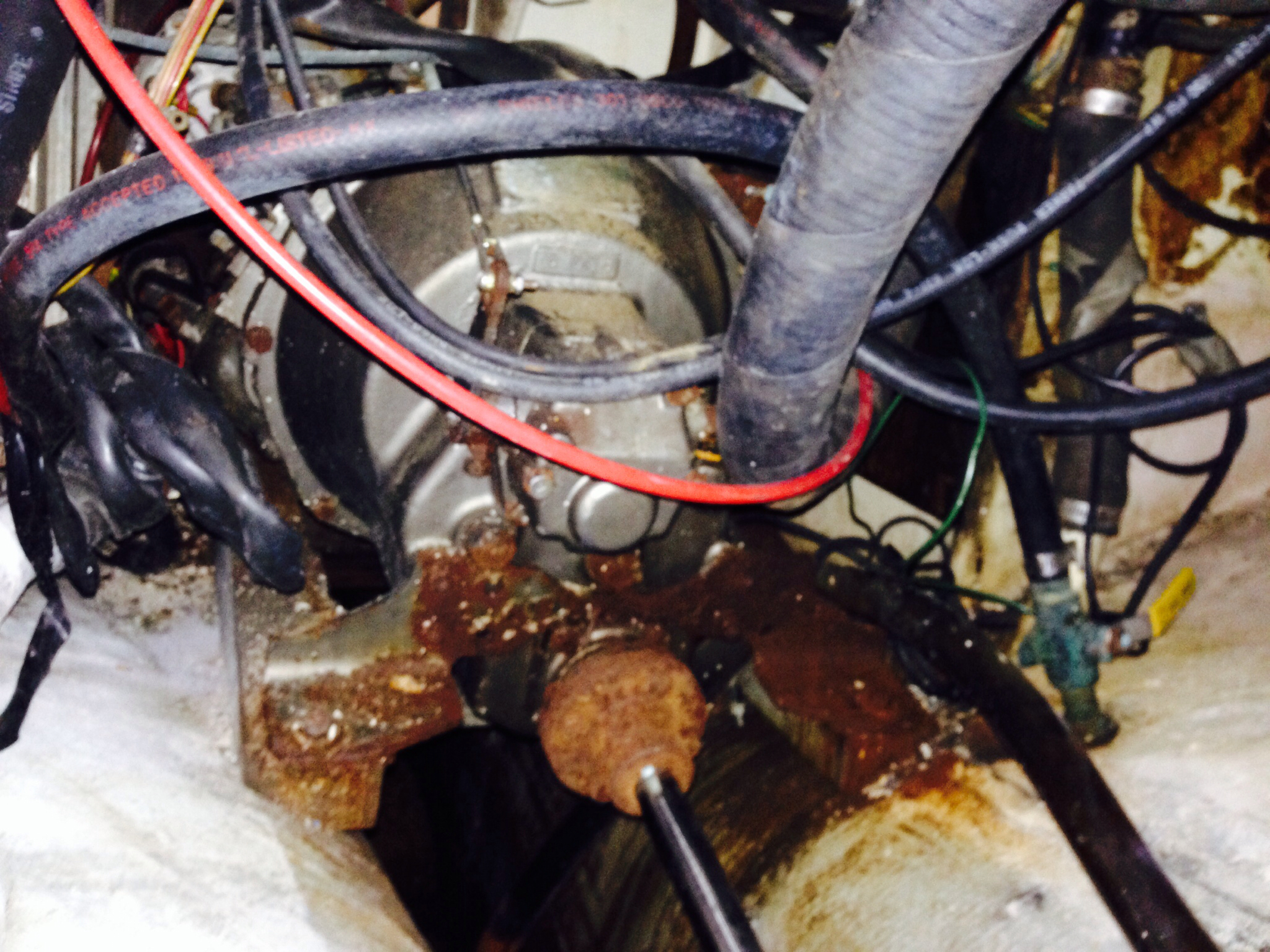 The tool in question turned out to be a 11/16 socket and matching crescent wrench. A bit hard to see in the picture but I finally succeeded in loosening the bolts on the shaft coupling- which is the flange attaching the propeller shaft to the engine. I’ll get more into the why I spent 4.5 hrs (1.125 hrs/bolt) lying on my back crammed into the crawl space underneath the cockpit in a later post. For now it is enough that the thing is done.