I’ve been ruminating on the best course of action to bring the deck back to life, and I have a plan. There are a few areas where the old non-skid is so shot that it will have to come up… 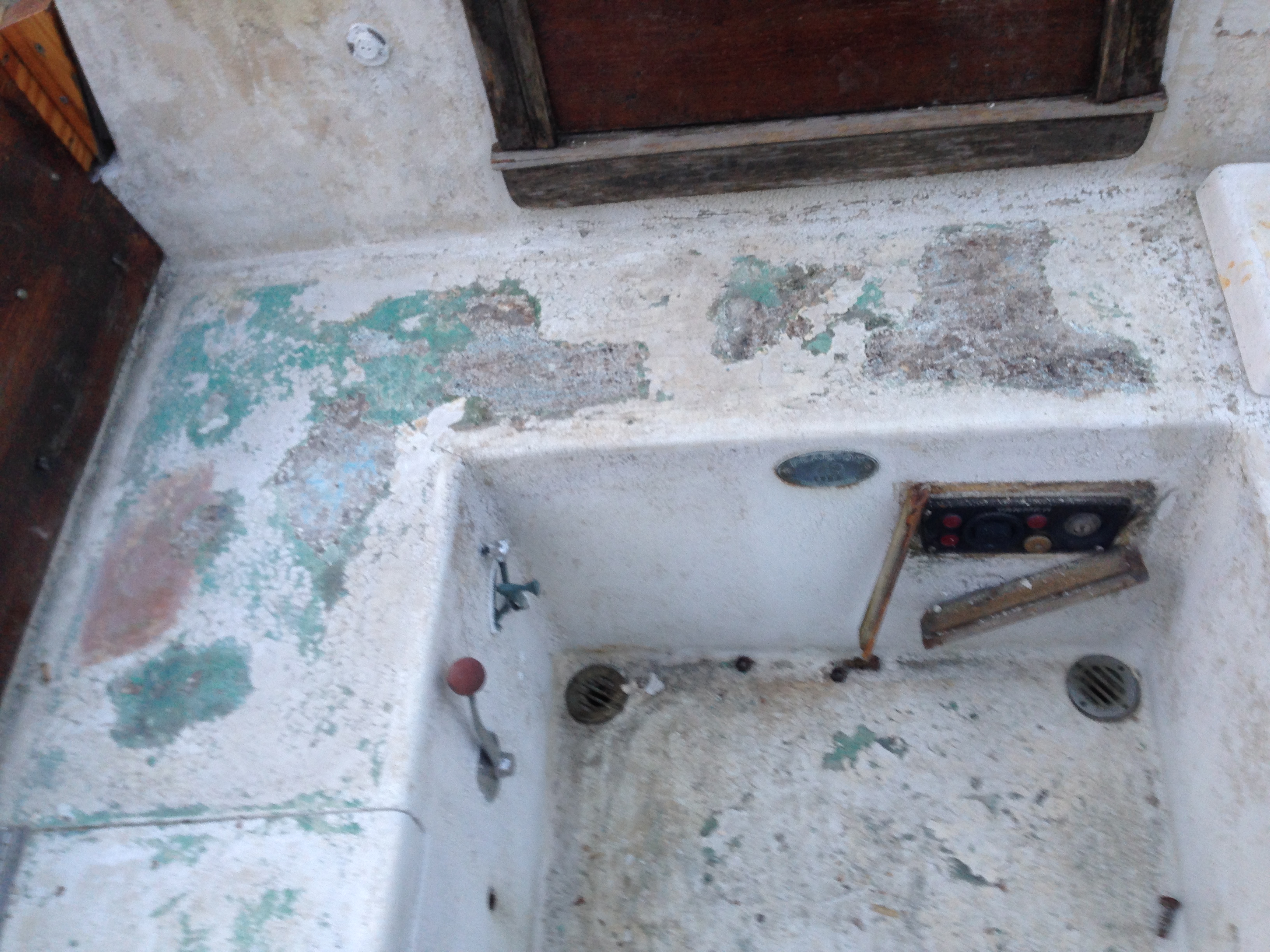 For the rest of the deck, I intend to paint on a coat of epoxy- much like the barrier coat we did on the topsides and the hull below the waterline. My thinking is that the epoxy will flow into the hairline cracks (aka crazing) in the deck and lock everything together. I considered using polyester resin- which is half the cost of epoxy, but polyester is a laminating resin as opposed to an adhesive. I also considered using a high-build epoxy primer- but since this coating will require some strength I think it’s best to use a product specifically designed for bonding. My one concern is that epoxy is fairly brittle on its own- but I think a solid deck and a thorough paint job will protect it. With that in mind I took advantage of a warm day last week to do a little test. 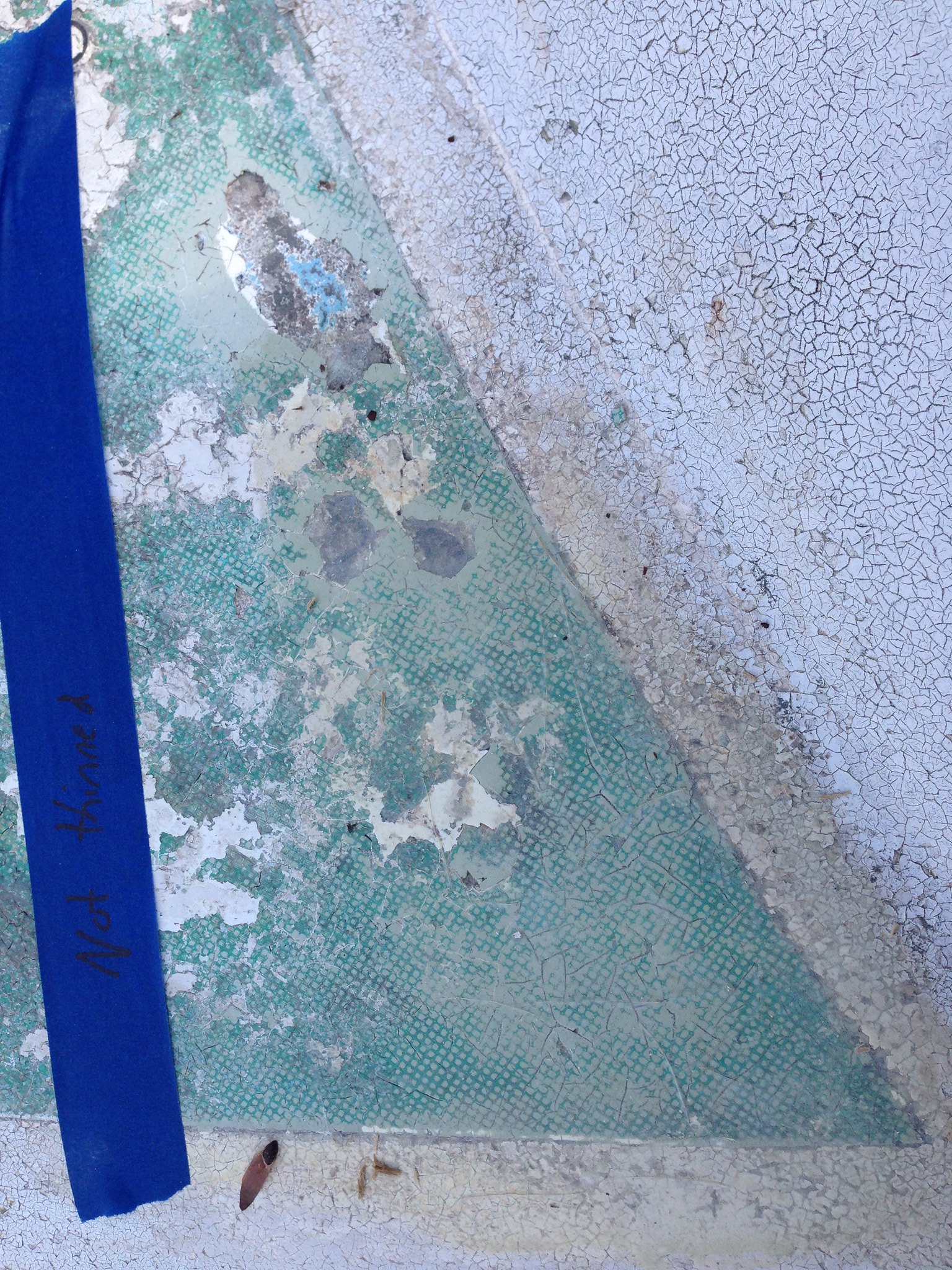 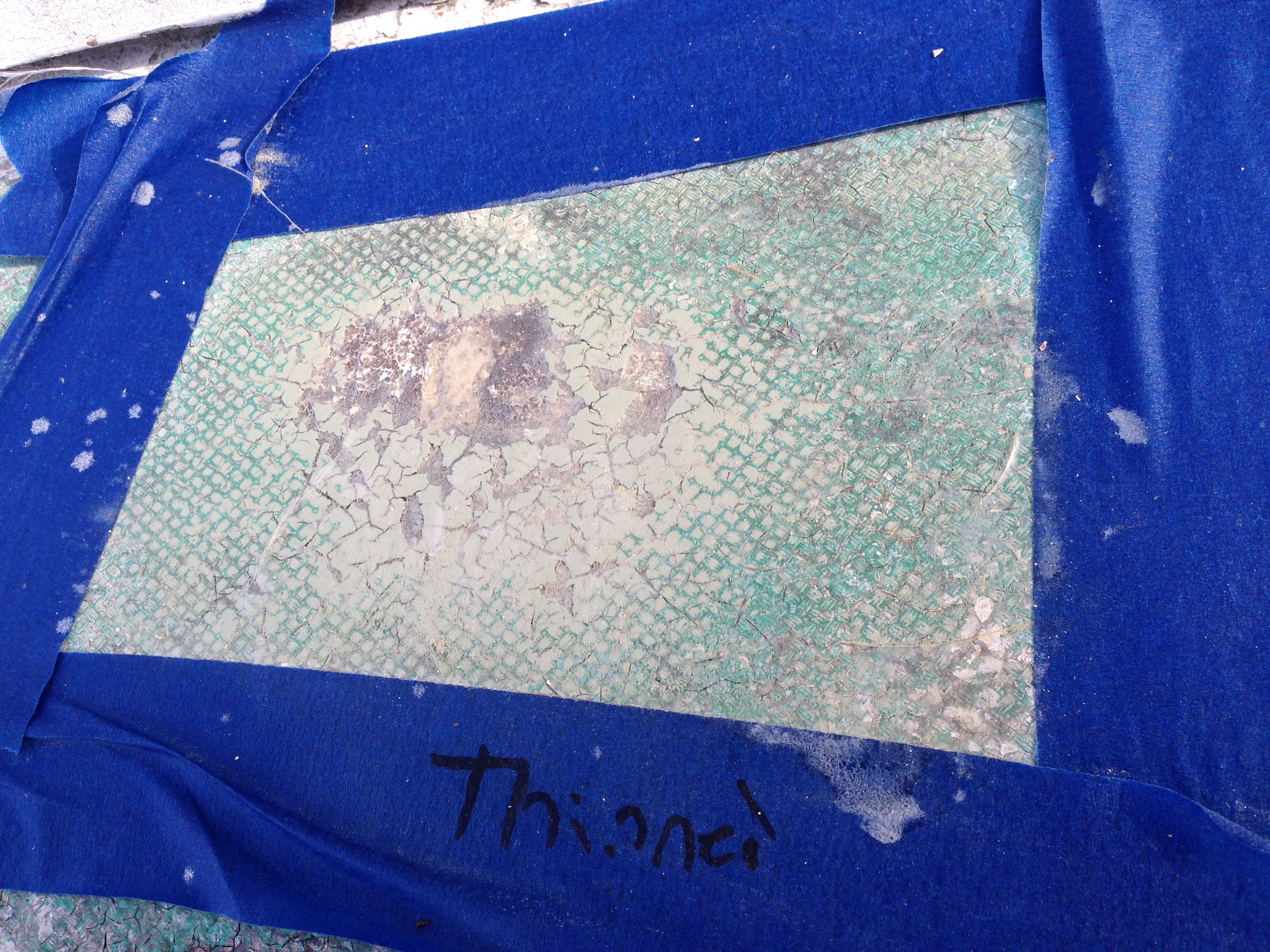 I chose two sections that looked equally crappy- they were right on the border of having to be ripped up. On the first I applied a coat of epoxy, on the second a coat of epoxy thinned out considerably with acetone. Until the temperature hits about 80 degrees F, epoxy is pretty viscous stuff, which I thought might prevent it from flowing fully into all the cracks. The addition of acetone lets the epoxy flow nicely, and also results in a thinner coat.

I’m quite pleased with the results- both sections are smooth to the touch and withstood vigorous attacks with a handheld scraper- the scraper pulled up thin shavings of excess epoxy and that’s it. The normal coat bubbled a bit in places and was perhaps 1/64″ proud of the deck. The thinned coat covered a significantly larger area and dried pretty much flush, so I will most likely go in that direction. I need to read up a bit on how acetone affects the physical properties of epoxy before making a final decision.

All of this takes much longer to describe than to to do, so I figured while I was at the boat, I’d do a little scraping and tackle a small project. It doesn’t take long to get tired of scraping paint, so I decided that I’d just pop the old diesel tank out and call it a day. The most dangerous words when working on a boat- “while I’m here…” The most useful words- “Oh well.”

I managed to cut through the steel straps holding the tank in place in relatively short order. The fill hose too came off without a hitch. I then discovered that the tank was still mostly full- full enough at any rate that I couldn’t easily manhandle it. So I set up a siphon… 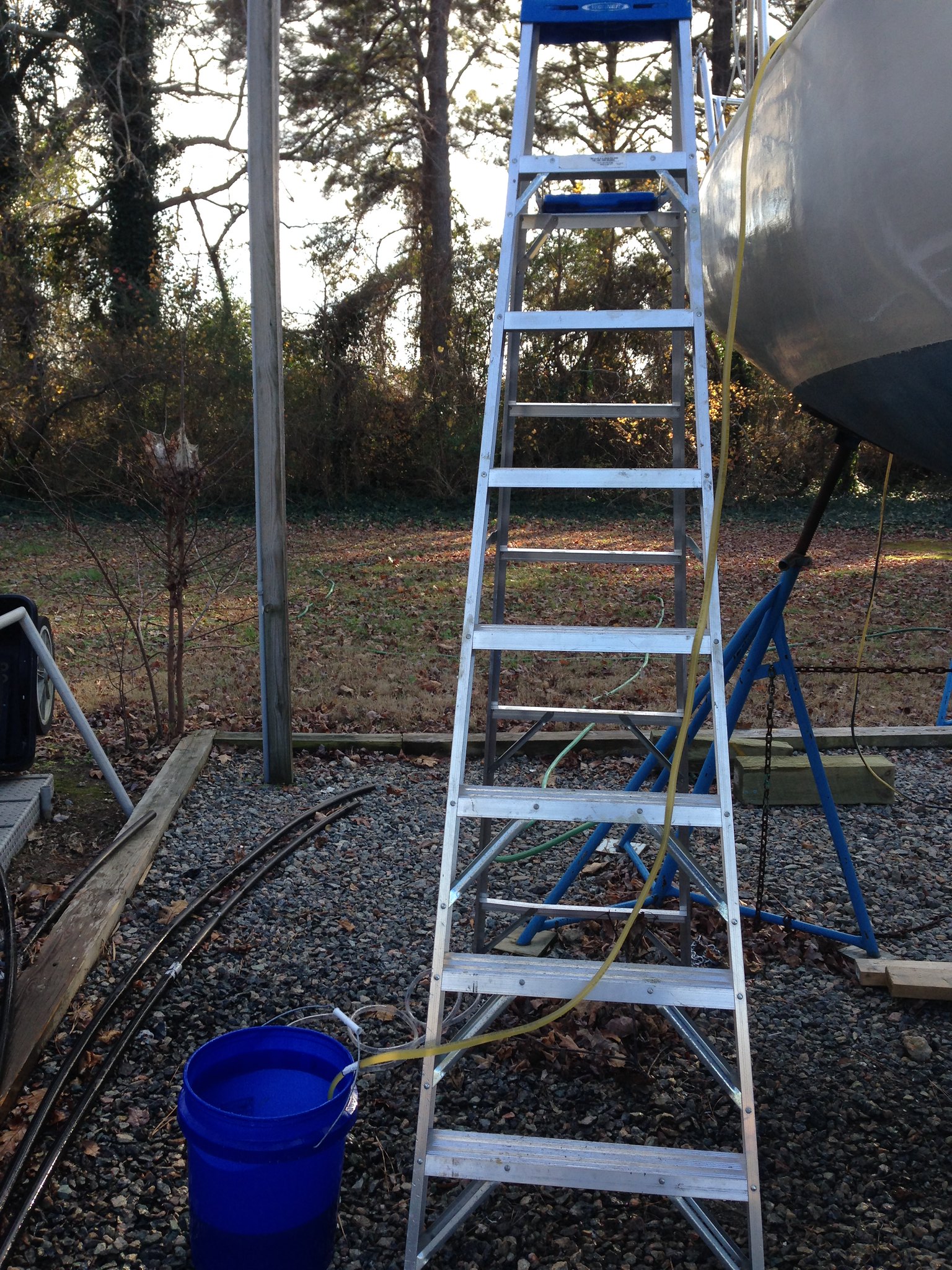 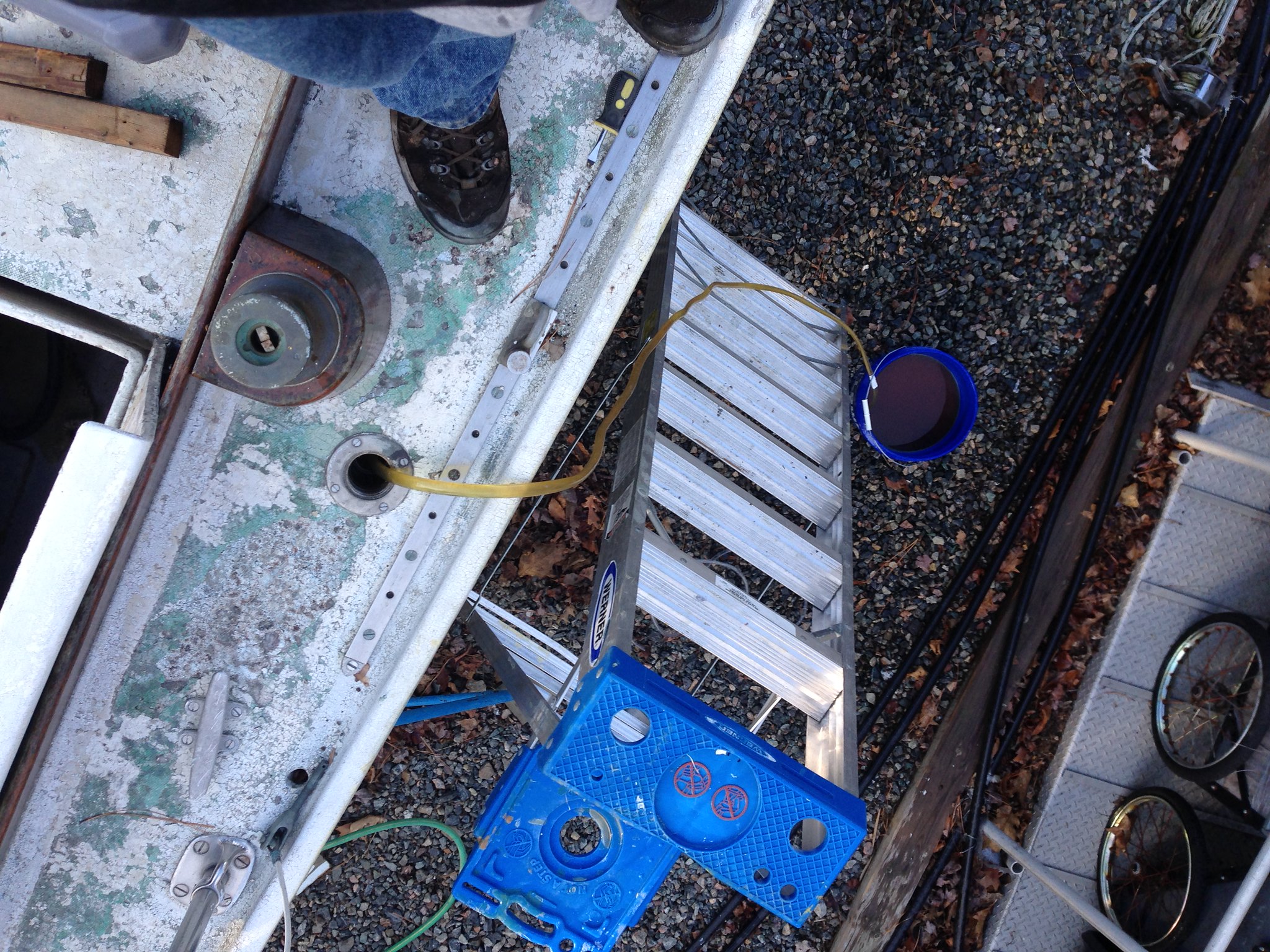 It was at this point that I realized that there was more fuel in the tank than I had buckets for, so I combed the boatyard and “borrowed” a few. With the tank empty all that was left was to pull it out of the cockpit locker, and of course it didn’t fit. To make a 3-hour long, profanity laden story short, the only way to remove the tank was to tip it on end and slide it through the forward end of the hatch (the hatch tapers as you move aft and the tank didn’t fit). The only way to tip the tank on end was to remove the old fuel filter housing- which I eventually accomplished by beating it to death with a hammer. 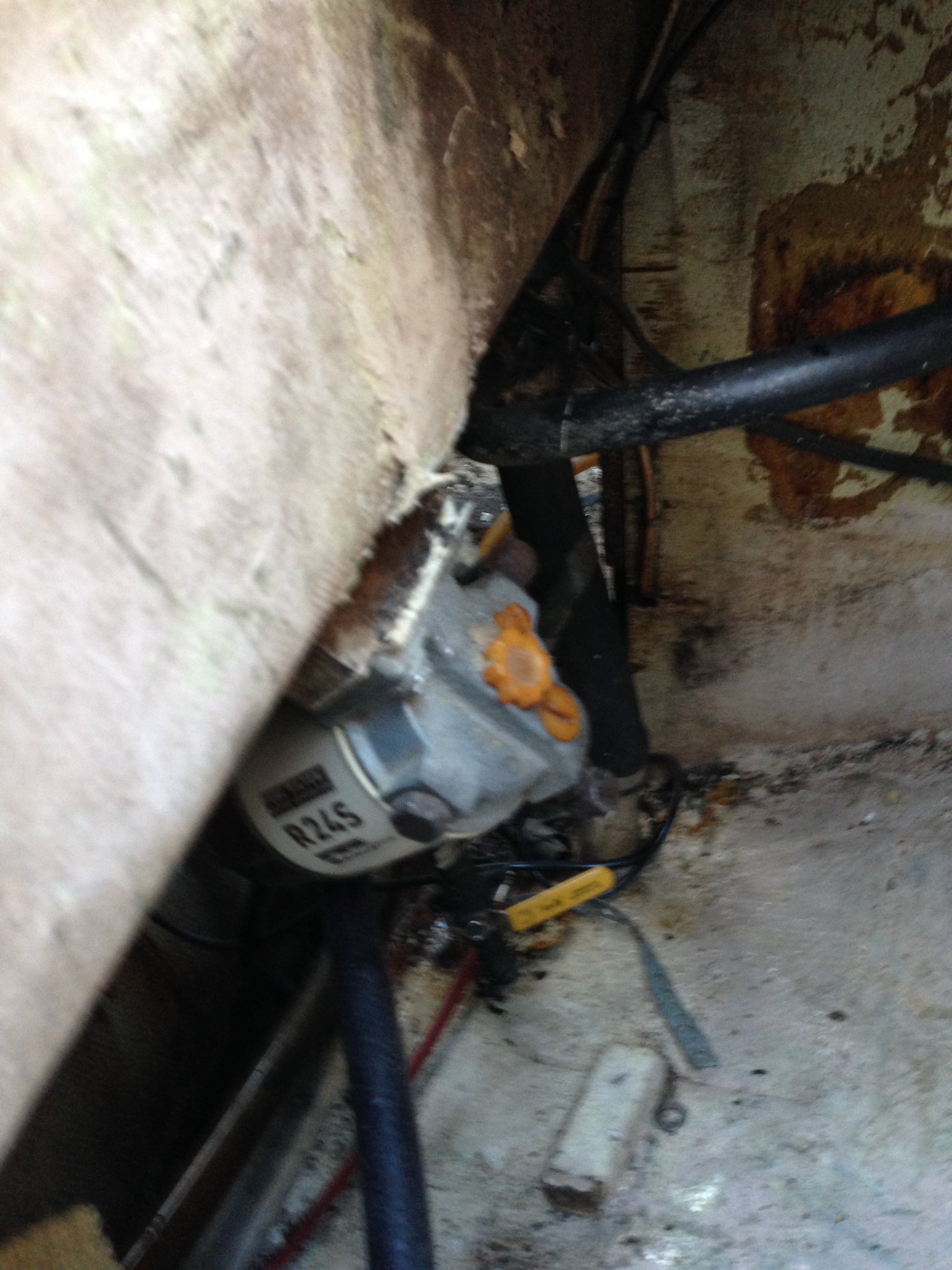 Then the tank came out, the fuel went back in (having nowhere else to put it), and I got the hell out of Dodge. 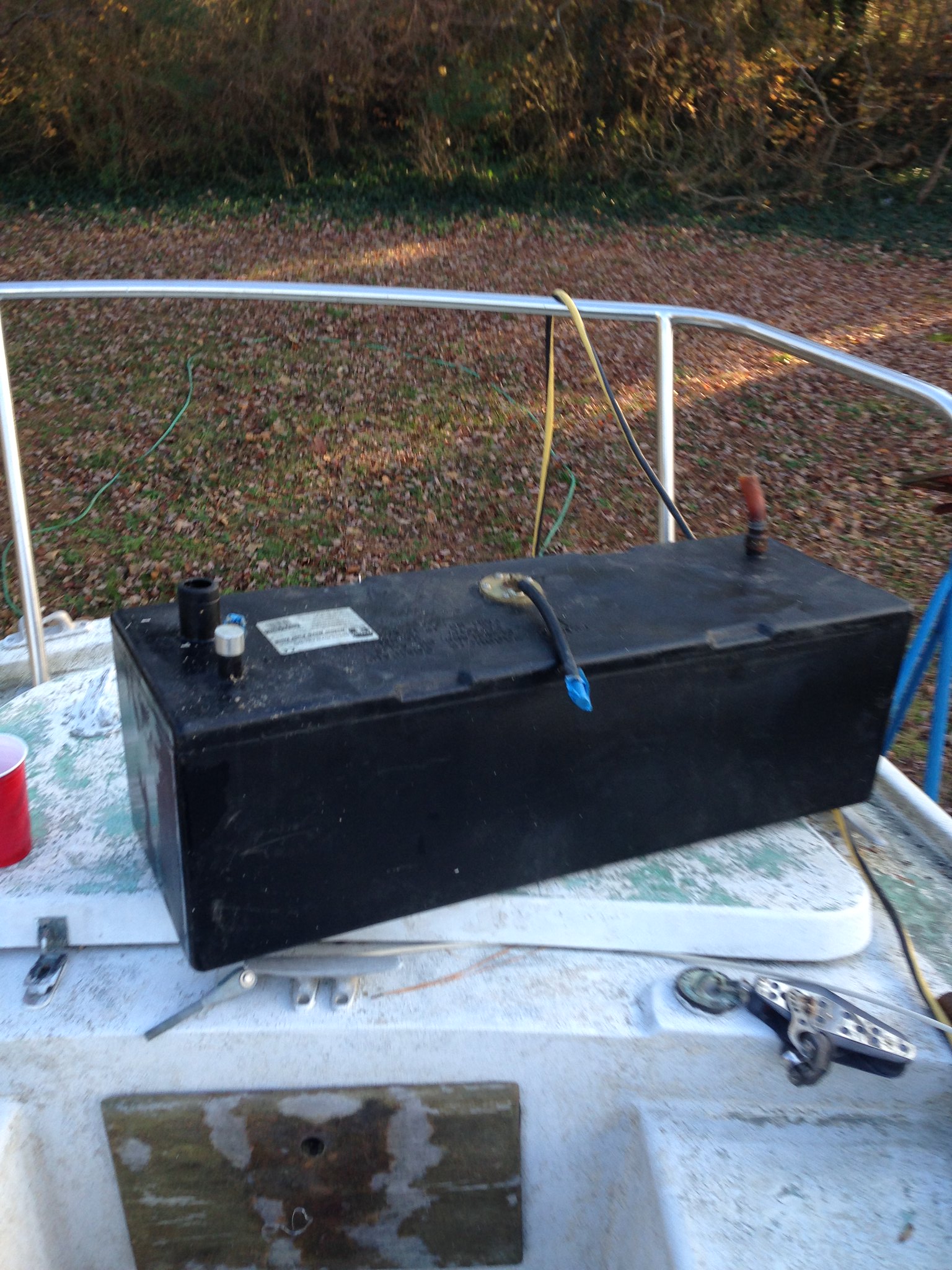 It was definitely a pain in the ass and one of the more challenging geometry problems I’ve encountered while working on the boat, but this is the sort of thing I signed on for when undertaking this project: knowledge won through experience. And some bruised knuckles. And a headache from paint chips and diesel fumes.

Damn if it didn’t get cold all of a sudden… 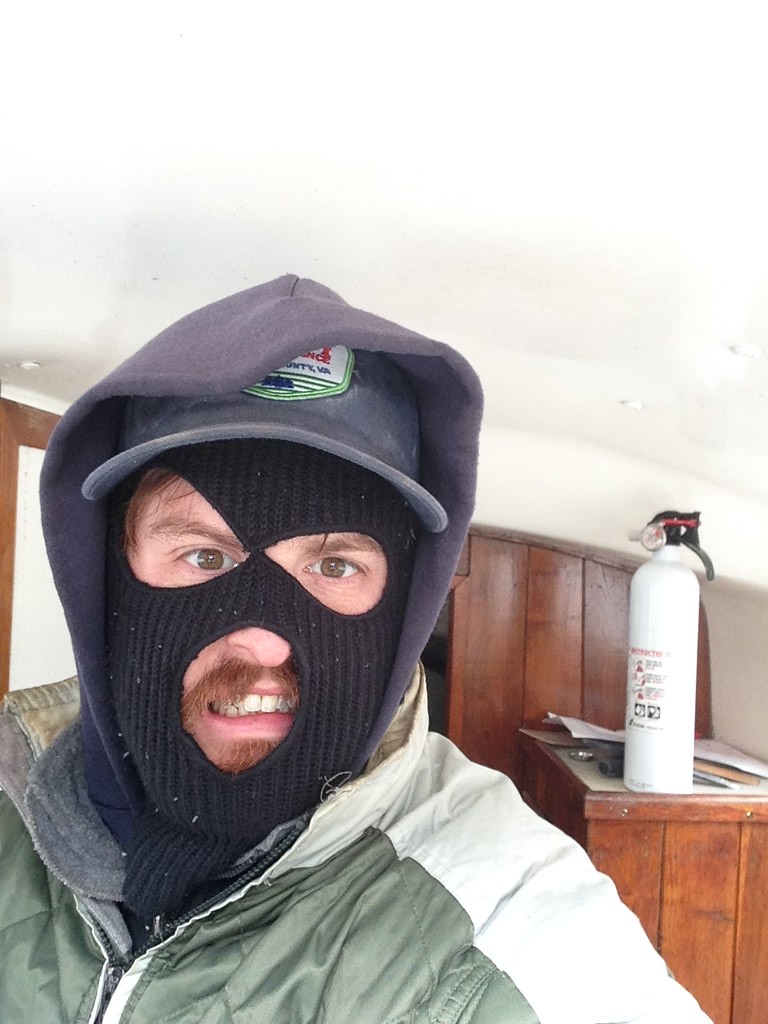 I finally stopped procrastinating on scraping the deck and jumped into that today. The paint was in such rough shape that it came up pretty easy. 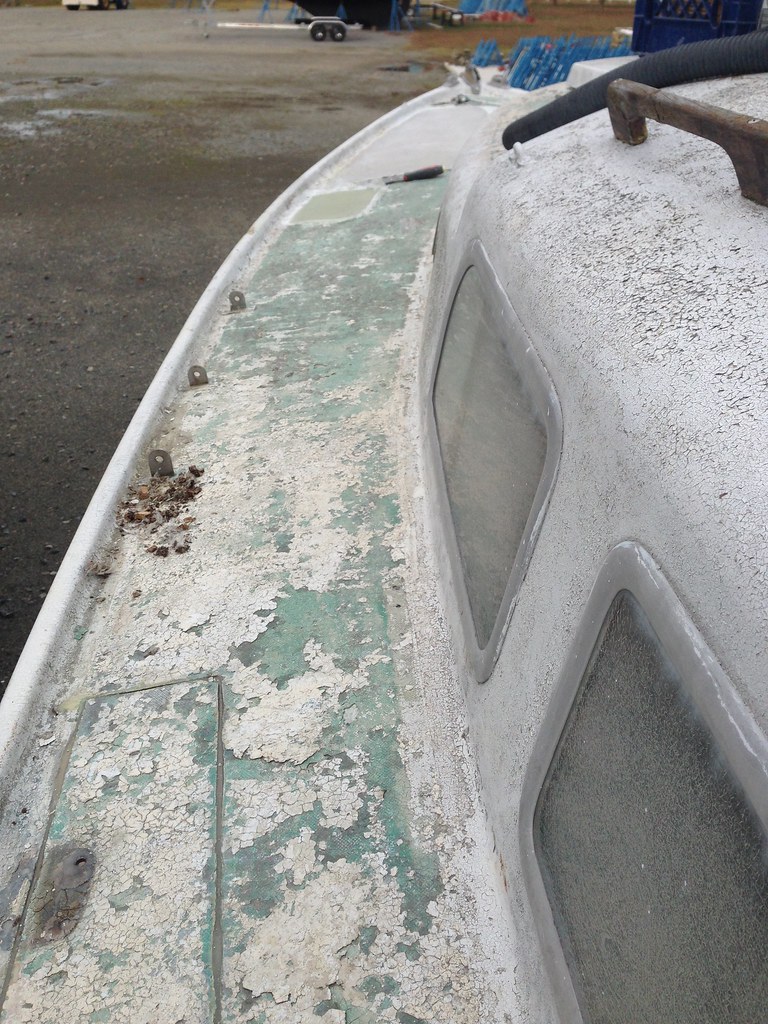 It looks like what happened is that sometime in the distant past the non-skid (which is the textured green part) wore out and was painted over. Now that layer of paint has failed- unfortunately in some places the non-skid is also coming up. I’ve pretty much ruled out pulling up all the old non-skid- I believe it’s original and in most places is integral with the fiberglass deck. So that leaves me with figuring out a way to get paint to bond nicely with the old non-skid. I’ve got a few ideas cooking, but I don’t have to decide anything until I’m done scraping/ the weather warms up. 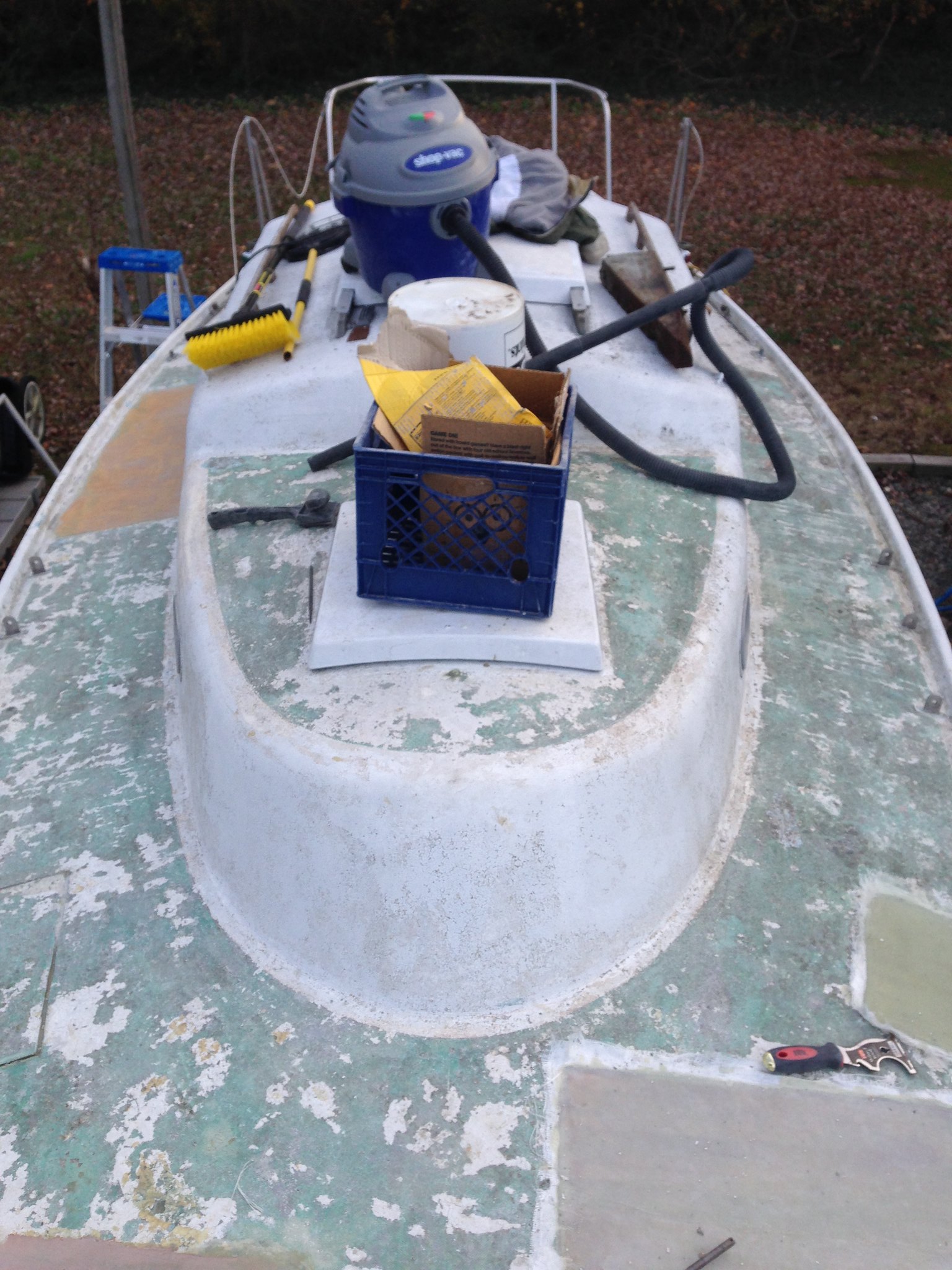 In other news my Uncle Tom wins the prize for successfully guessing the new name of the boat… a few more hints for everyone else. 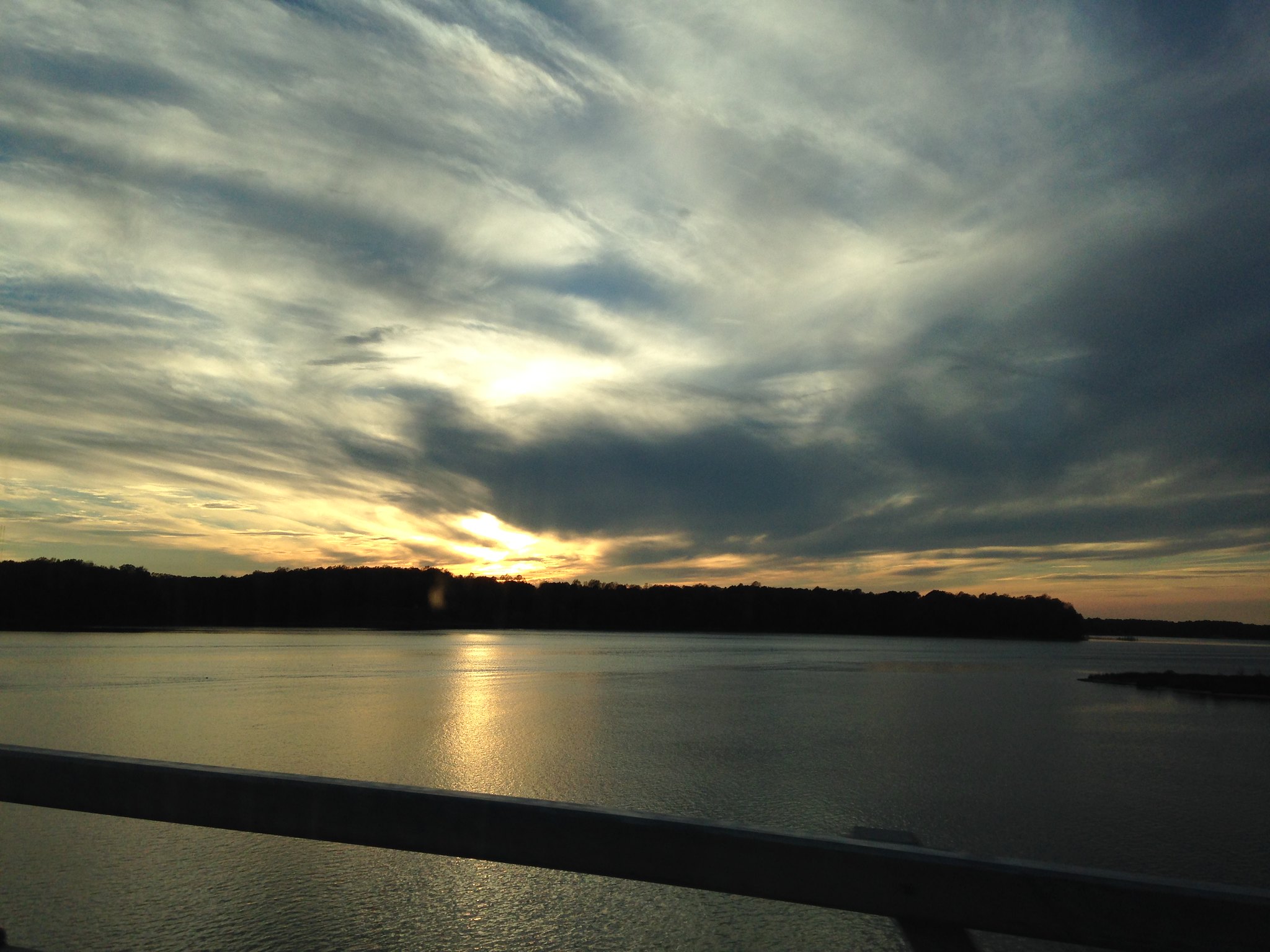 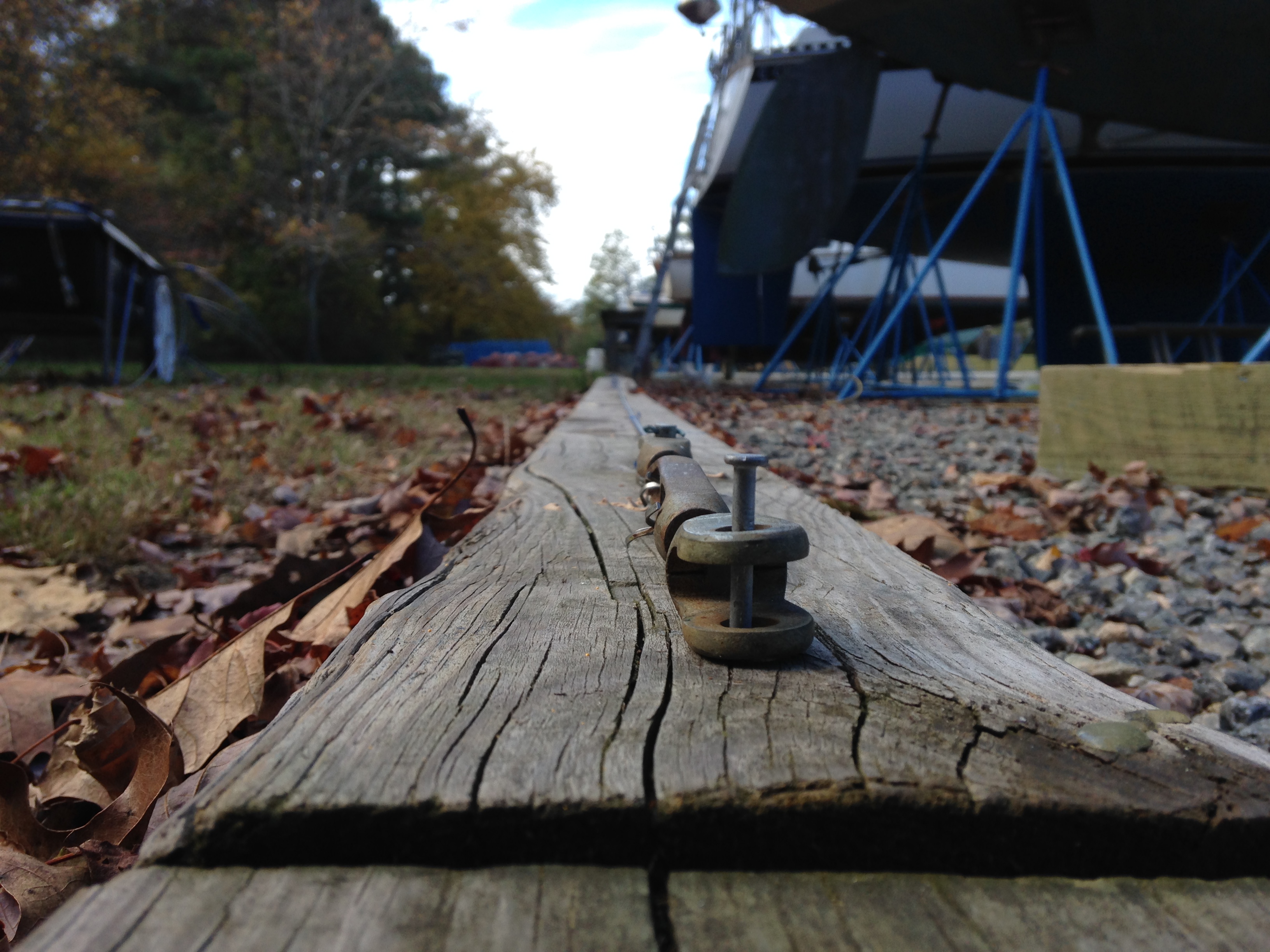 This weekend we tackled the next step on the rigging checklist- measure it! The standing rigging consists of various wires which hold up the mast- in our case 8 in total- the port and starboard upper shrouds, fore and aft starboard lowers, fore and aft port lowers, headstay, and backstay. 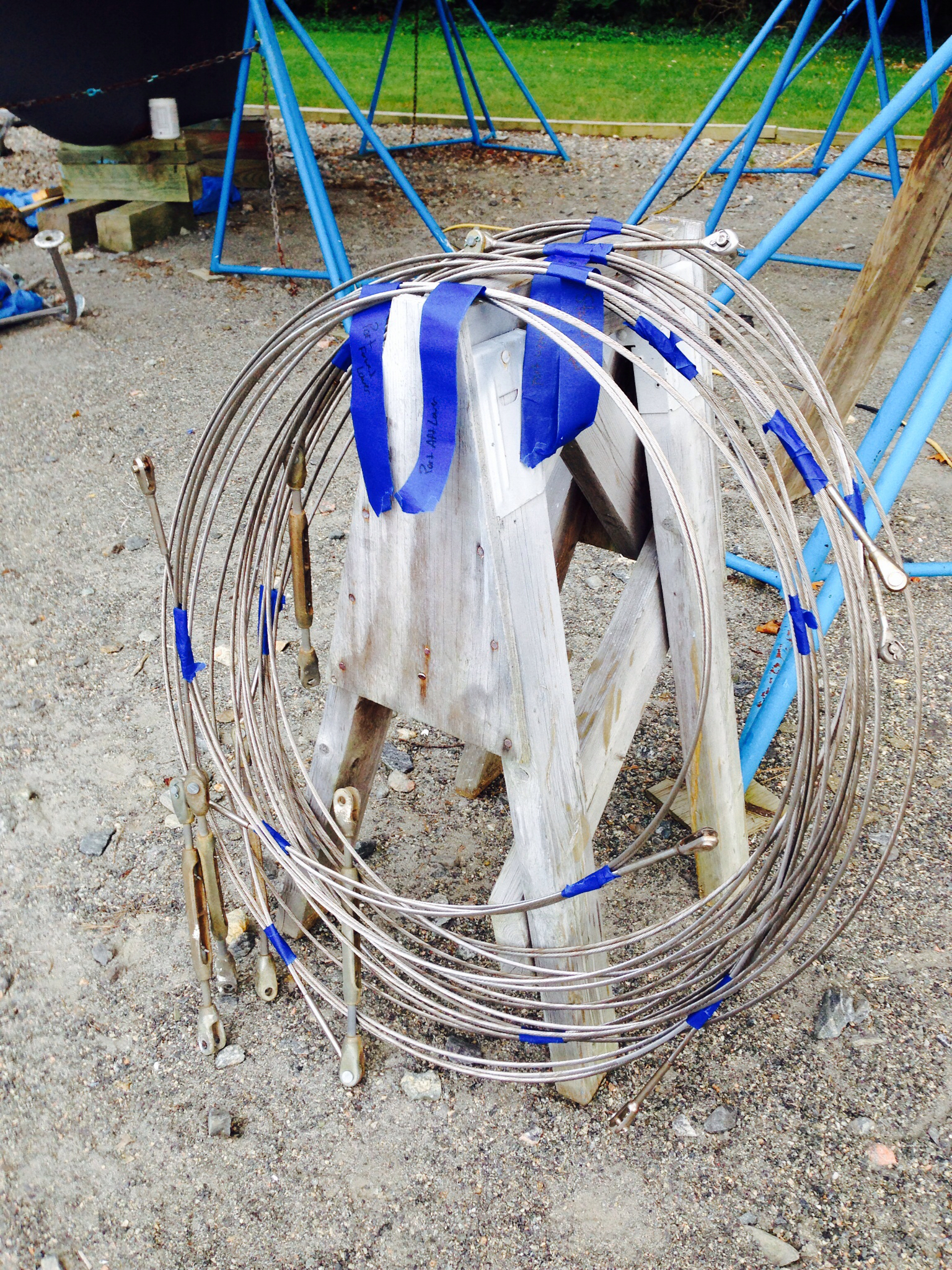 At both ends of each wire is a contrivance called an “end fitting” which terminates the wire in a solid thimble. The length of the wire is measured from the centerline of the hole in the thimble- which is where a solid pin called a “clevis pin” lives which allows the wire to be attached to either the mast at the top or a turnbuckle at the bottom.

Obviously an accurate measurement is important- when the time comes to put the mast back in the boat it will be expensive, not to mention embarrassing, if something doesn’t fit. So we fiddled around with a few different ways of getting the wire stretched out and settled on this: 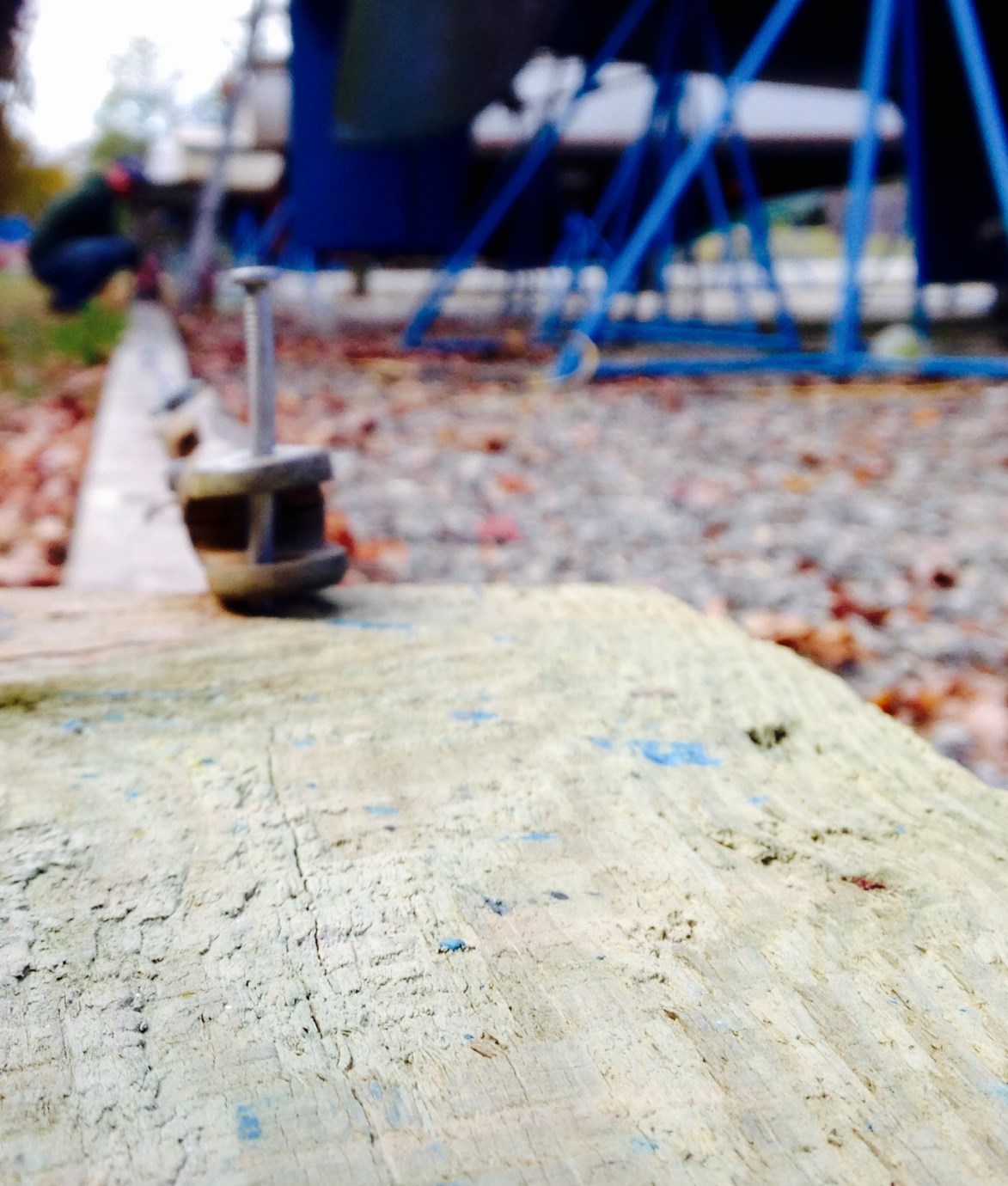 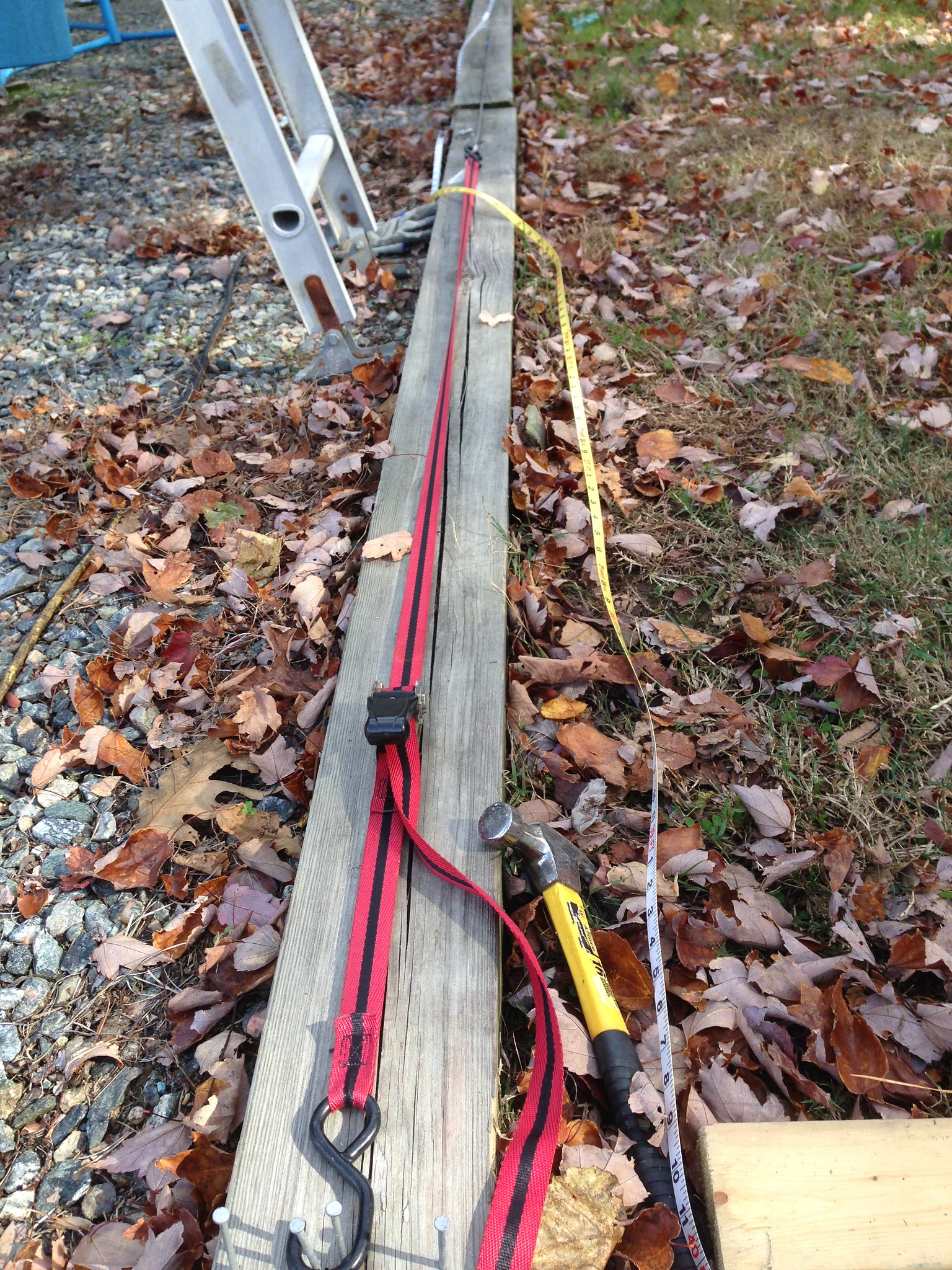 Tensioning the wire with ratchet straps worked great on the forestay and backstay, but the hook was too large to attach to the shrouds. We found we could get it plenty tight by hand and driving a nail to hold it in place- keep it simple stupid. 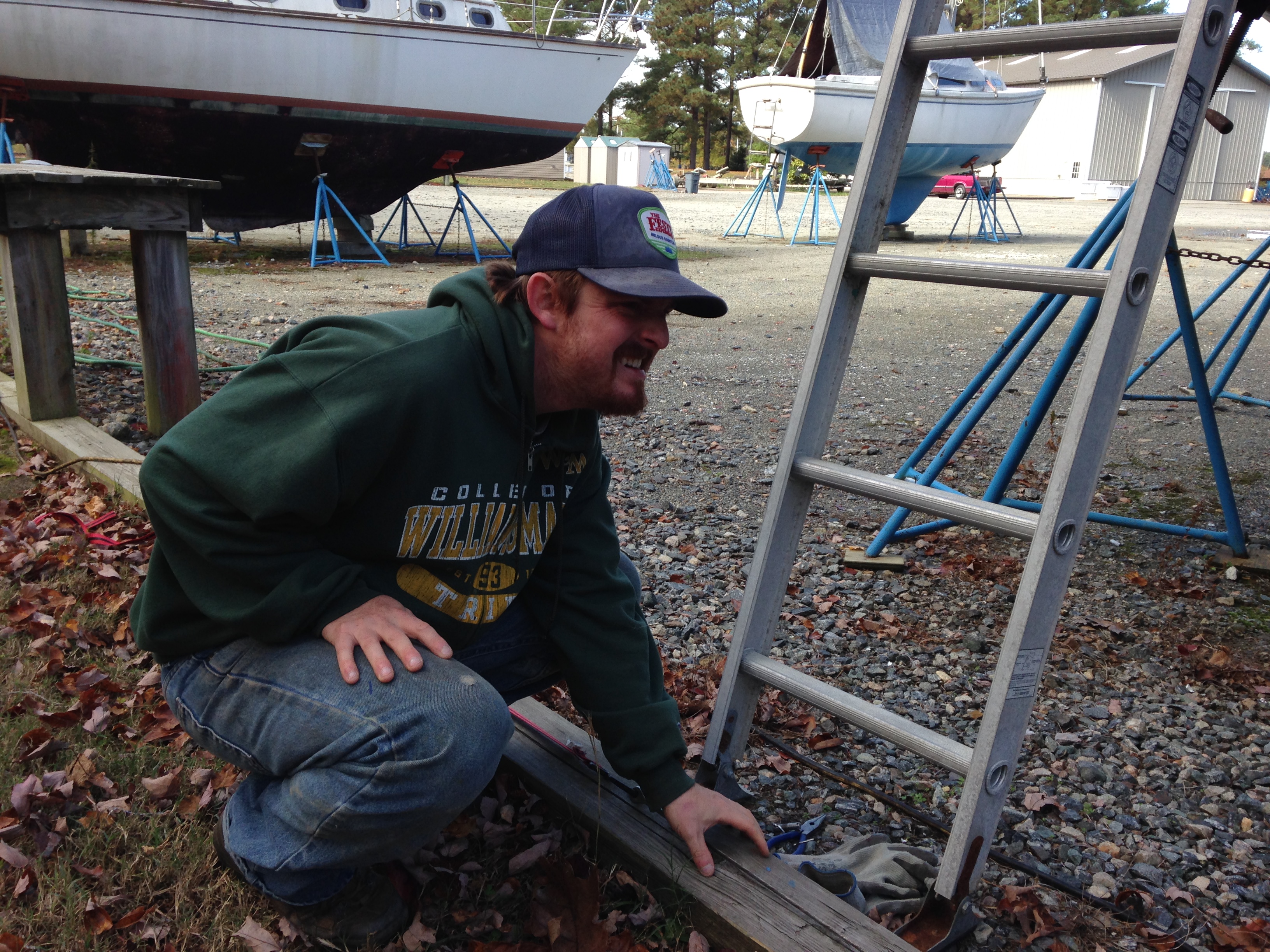 Does that look right?

I had a moment of paranoia when we began to measure the shrouds- if the starboard and port shrouds were of significantly different lengths it would imply some sort of major structural deformity. Apparently it’s common for boats to be a bit asymmetric, but one never knows right? Fortunately our measurements for all four shrouds agreed within 1/16″. 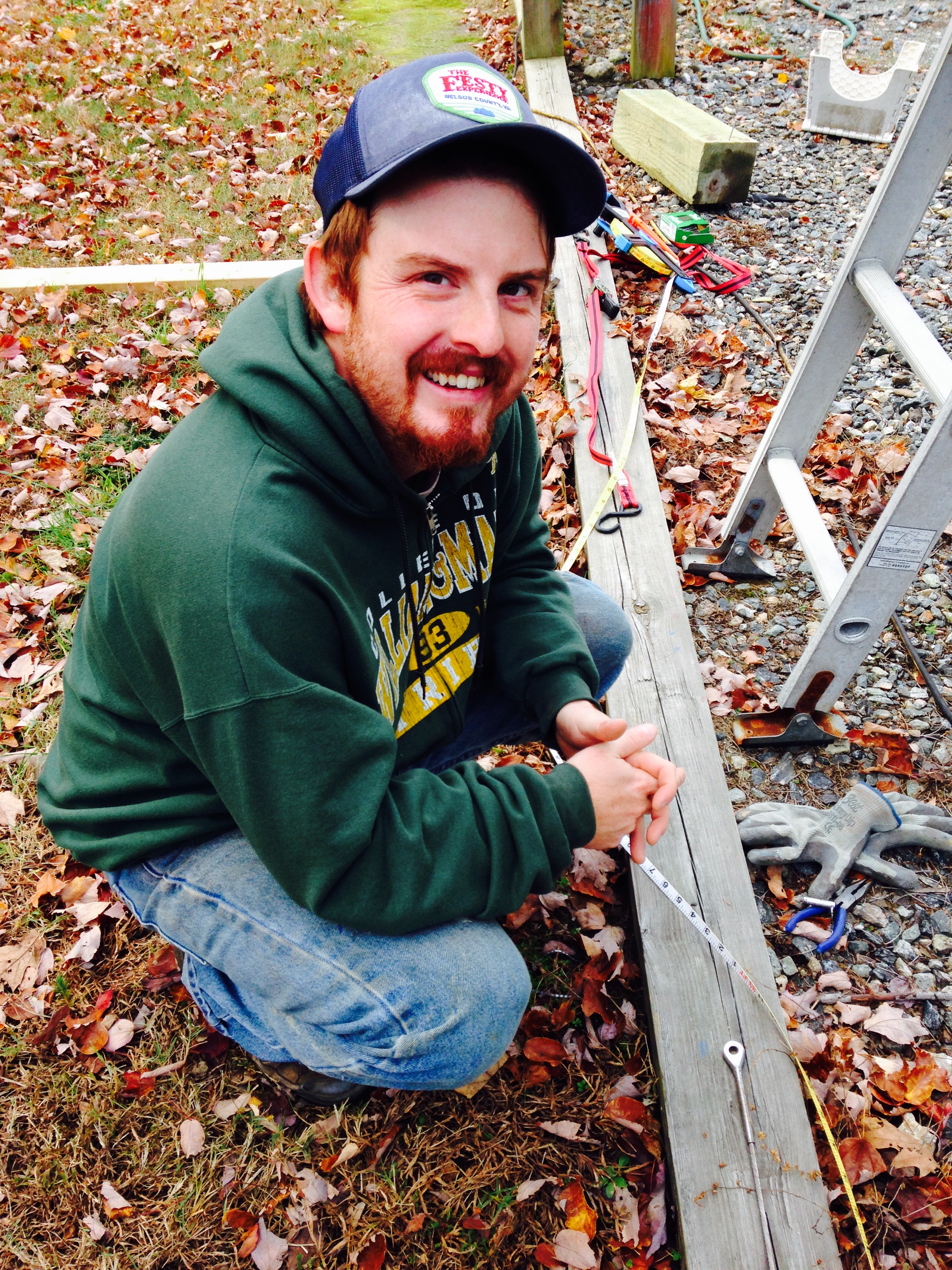 So we stretched out the wires, I would take two measurements, and Ryan would record the data. We used the boatbuilder’s method of recording offsets feet-inches-eighths. So our measurement of 31-4-6+ for the forestay equates to 31 feet, 4 inches, 6/8″ plus a 16th or 31ft 4 inches and 13/16ths.  It sounds complicated but it’s much easier to call out 14, 5, 3! then 14 ft 5 inches and 3/8ths! Which, incidentally is the length of the port aft lower shroud. You got that?! 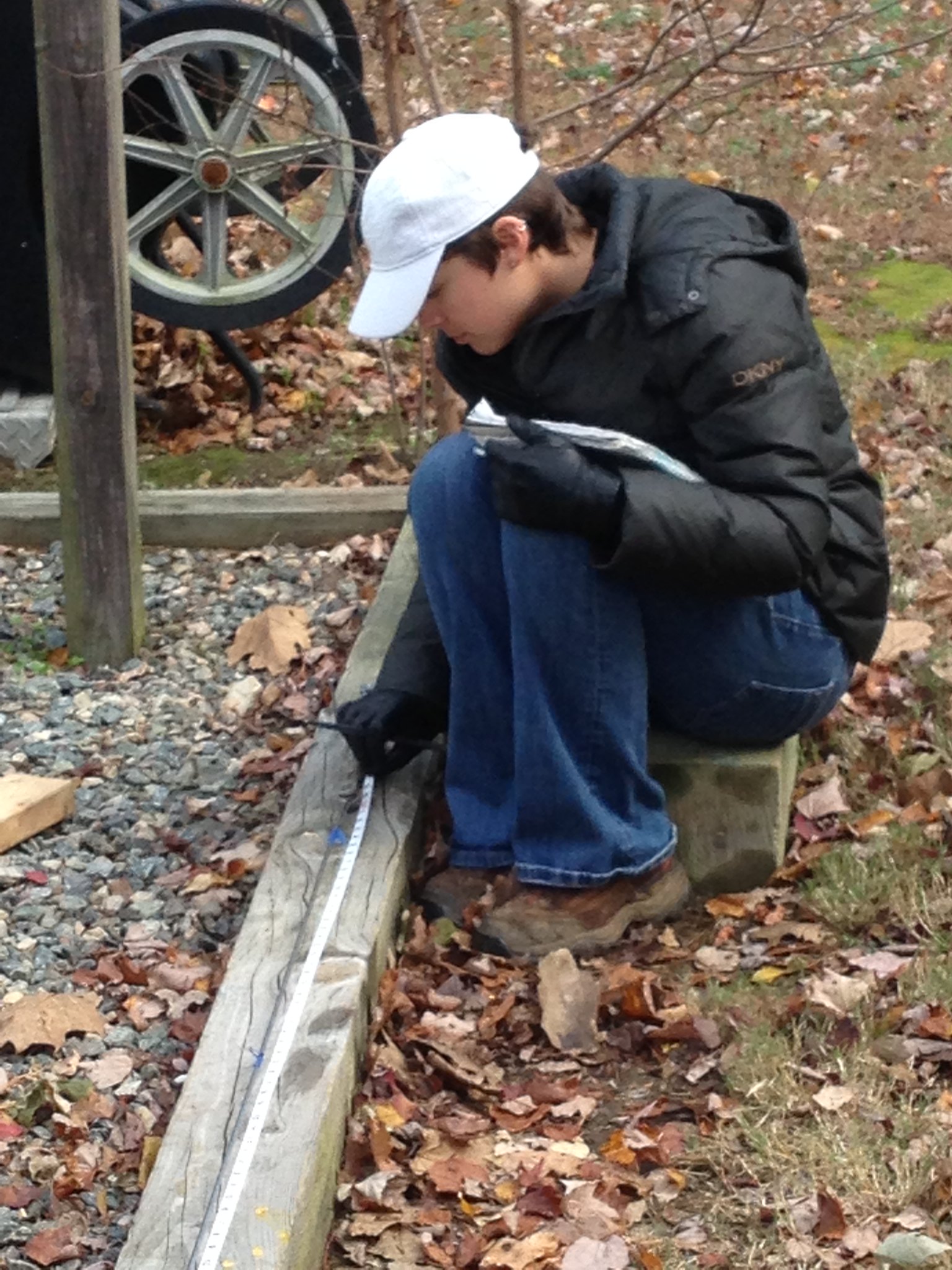 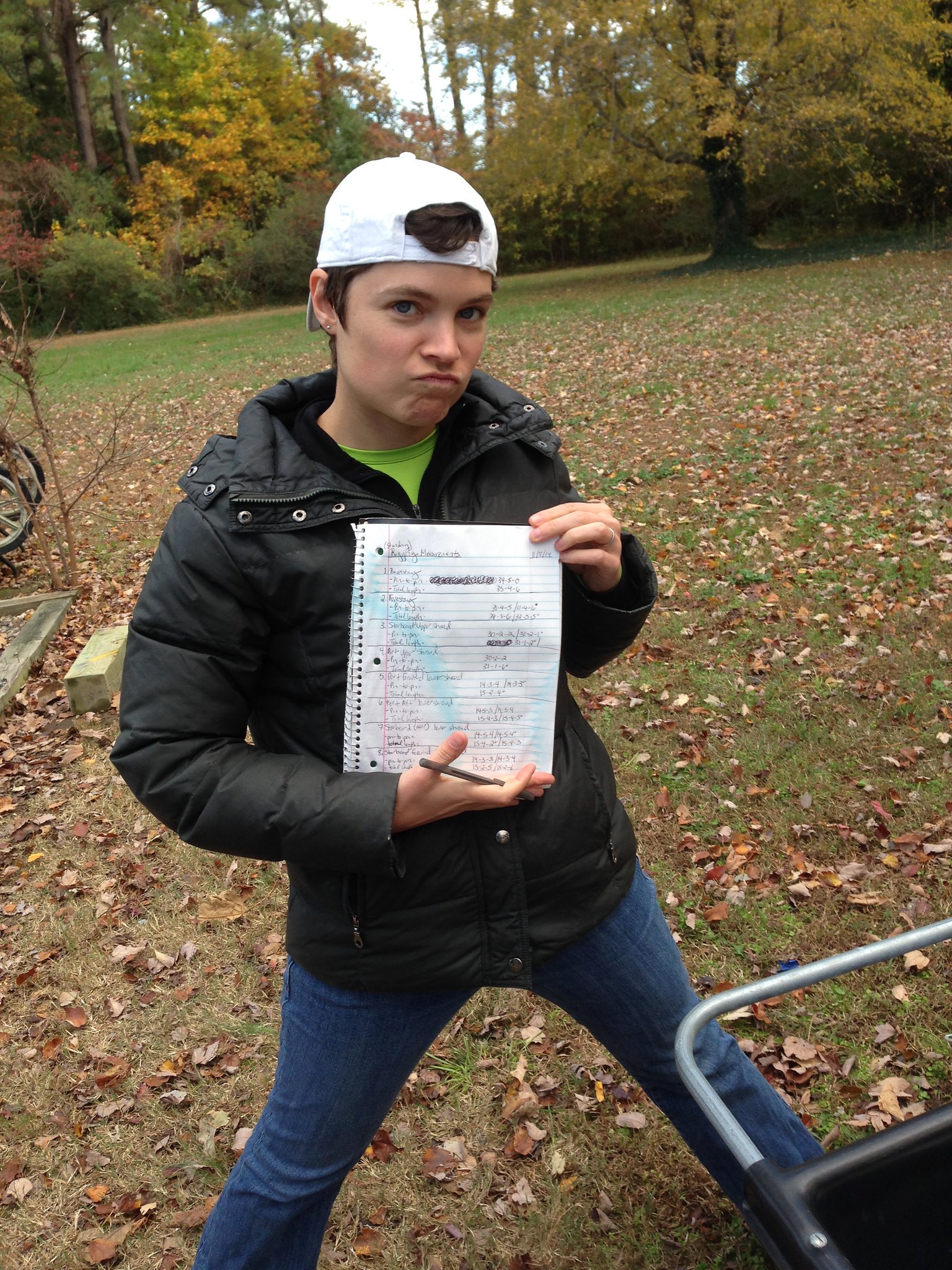 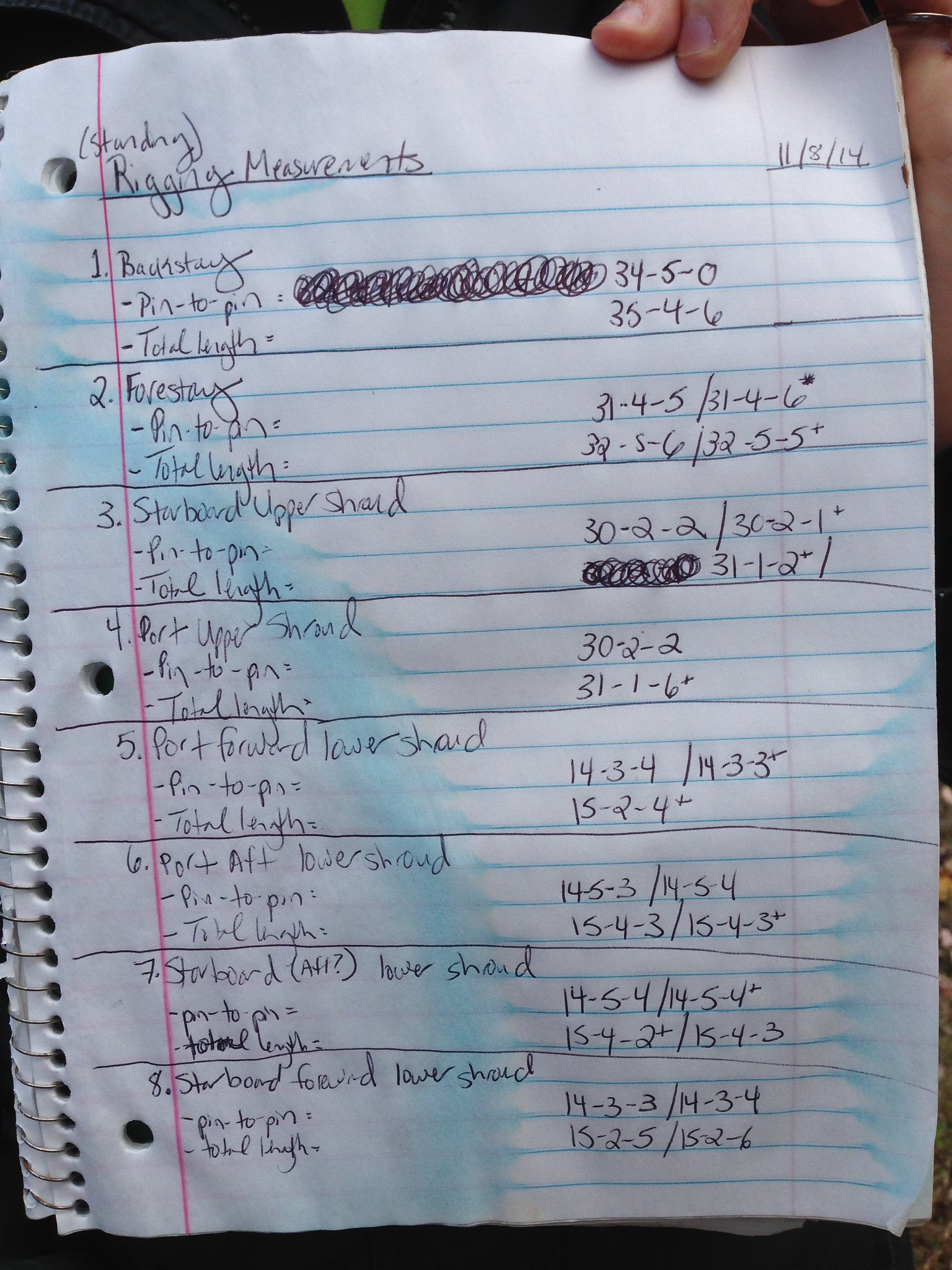 Having measured everything up and taken a close look at all the rig components, I’m glad we decided to replace everything. The wire itself is in good condition- no signs of corrosion. The turnbuckles however are pretty rough, primarily because the rig was installed without any toggles. Toggles are fittings which allow the wire to shift fore and aft or athwartships, and thus ensure a “fair lead” from the attachment point on the hull to the attachment point on the mast. The forces the rig creates conspired to bend several turnbuckles over time as a result of a “foul lead.” Now we have to design the new rig, but more on that later. That enough nautical arcana for ya? Thanks for reading! 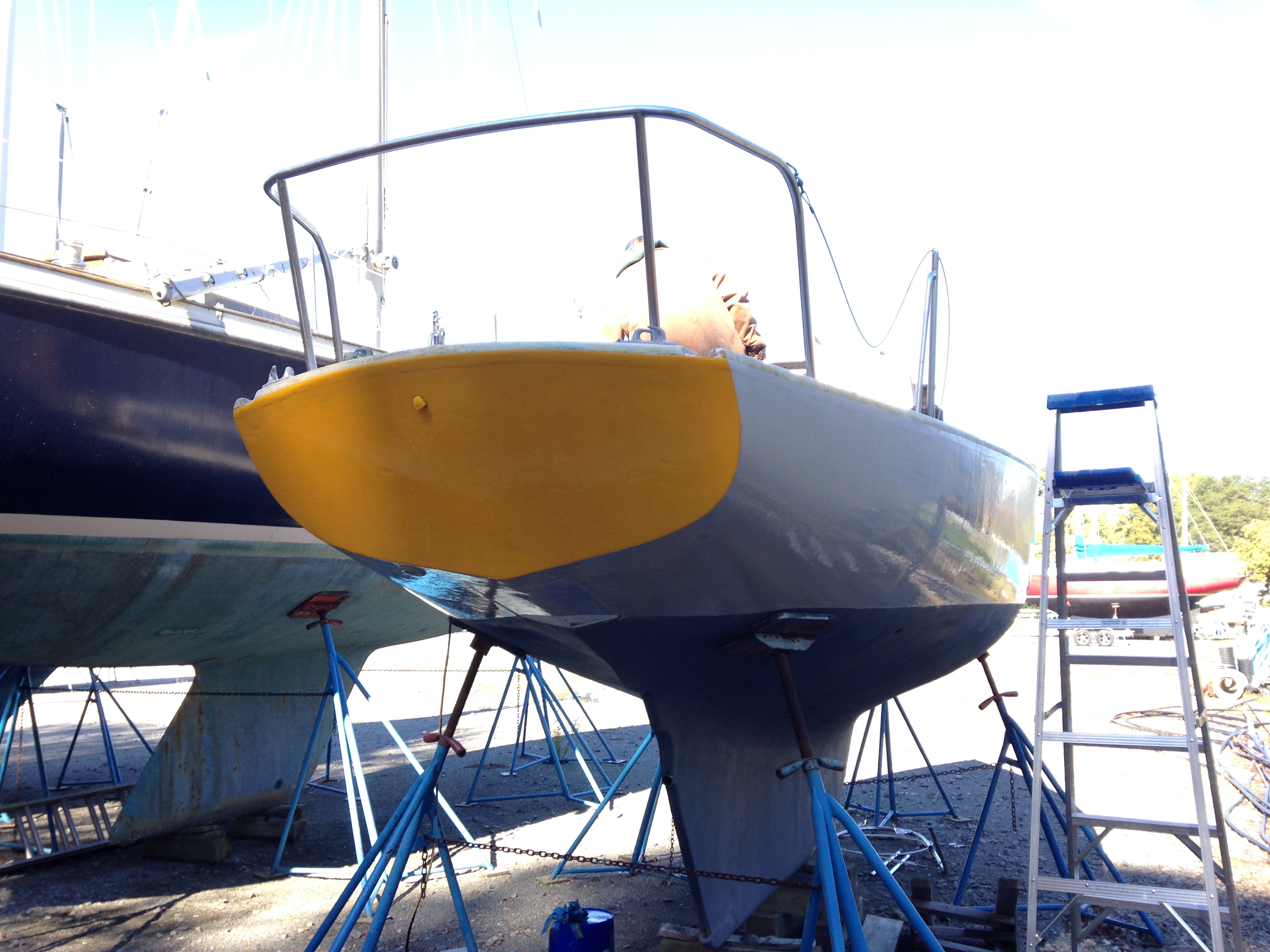 PS- Still waiting on an accurate prediction for the as-yet-unannounced name, any guesses? 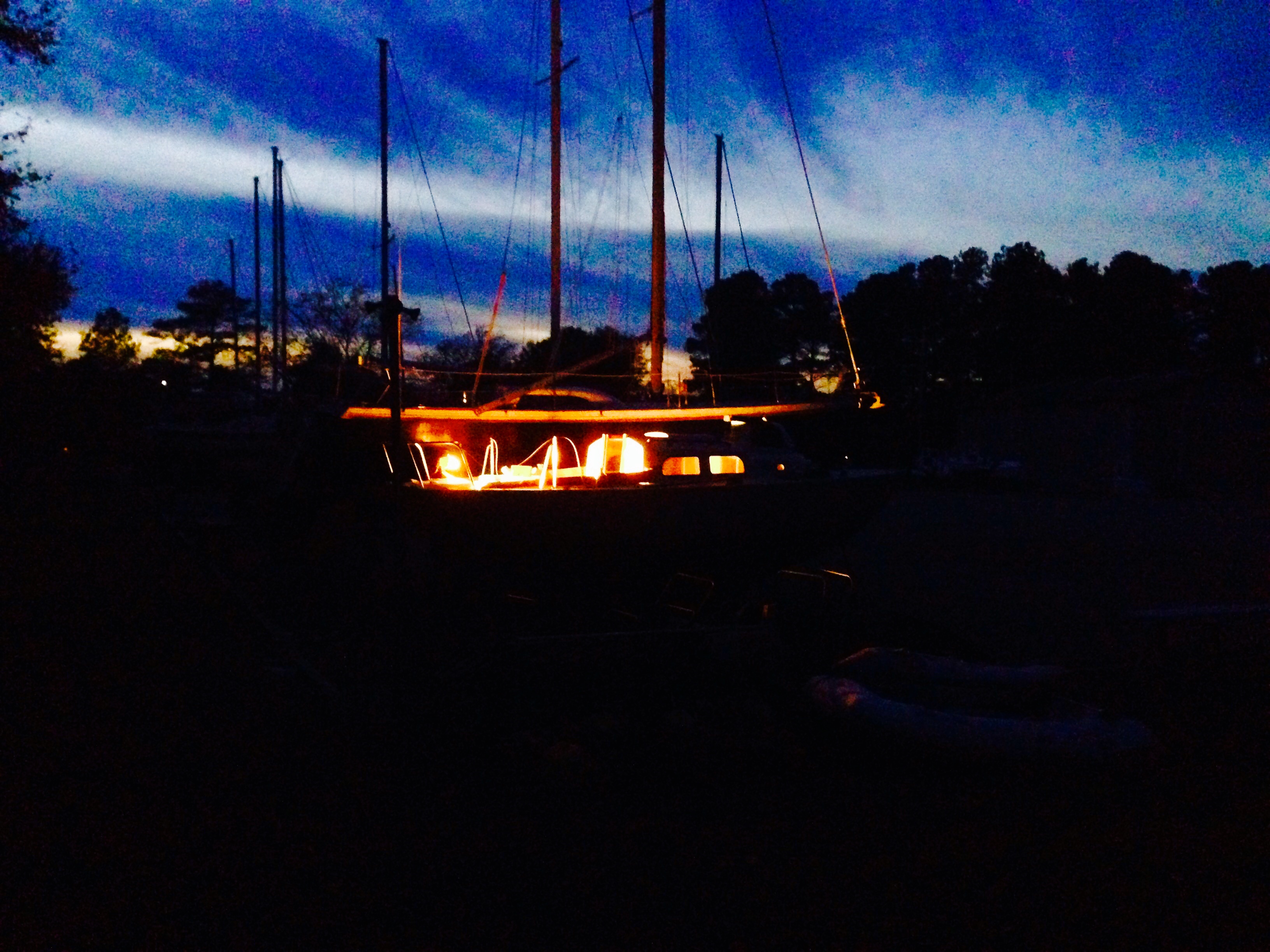 The weather is starting change here, we got our first taste of cold weather this past weekend- wind gusts hit 45 mph! I arrived at the yard on Sunday to discover our neighbors boom blowing around and slamming up against the lee shrouds. Not wanting his mast in my boat, I invited myself aboard and secured everything. Today I put what will hopefully be the last coat of paint on the transom- hard to tell how it turned out in the dark though… thanks DST.

I’ve been trying to finish up the last of the deck re-core project while the temperature is still high enough for epoxy to cure. The fast hardener (West System 205) is good down to 40 degrees, but it gets pretty syrupy and hard to work with when it’s that cold. 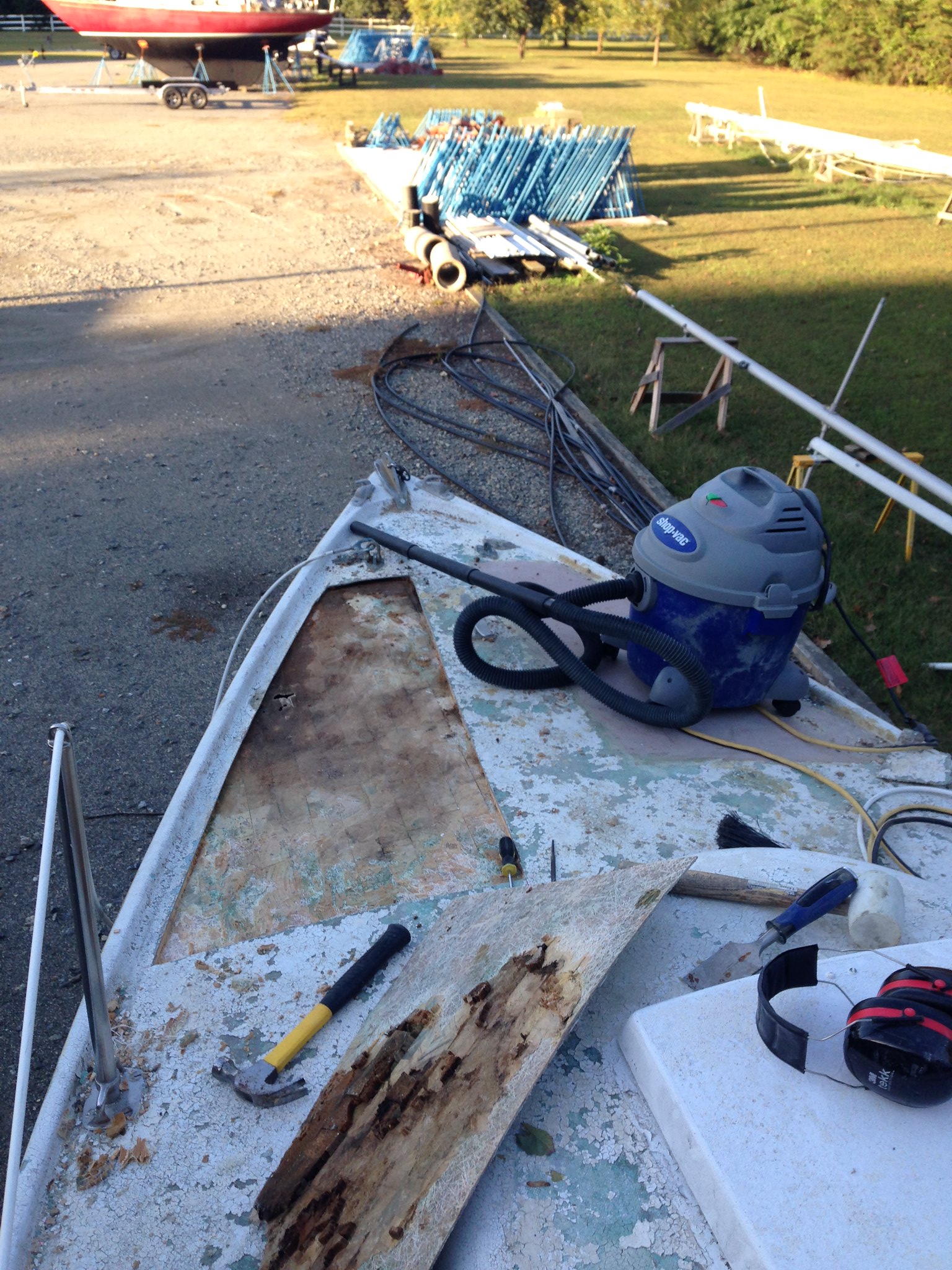 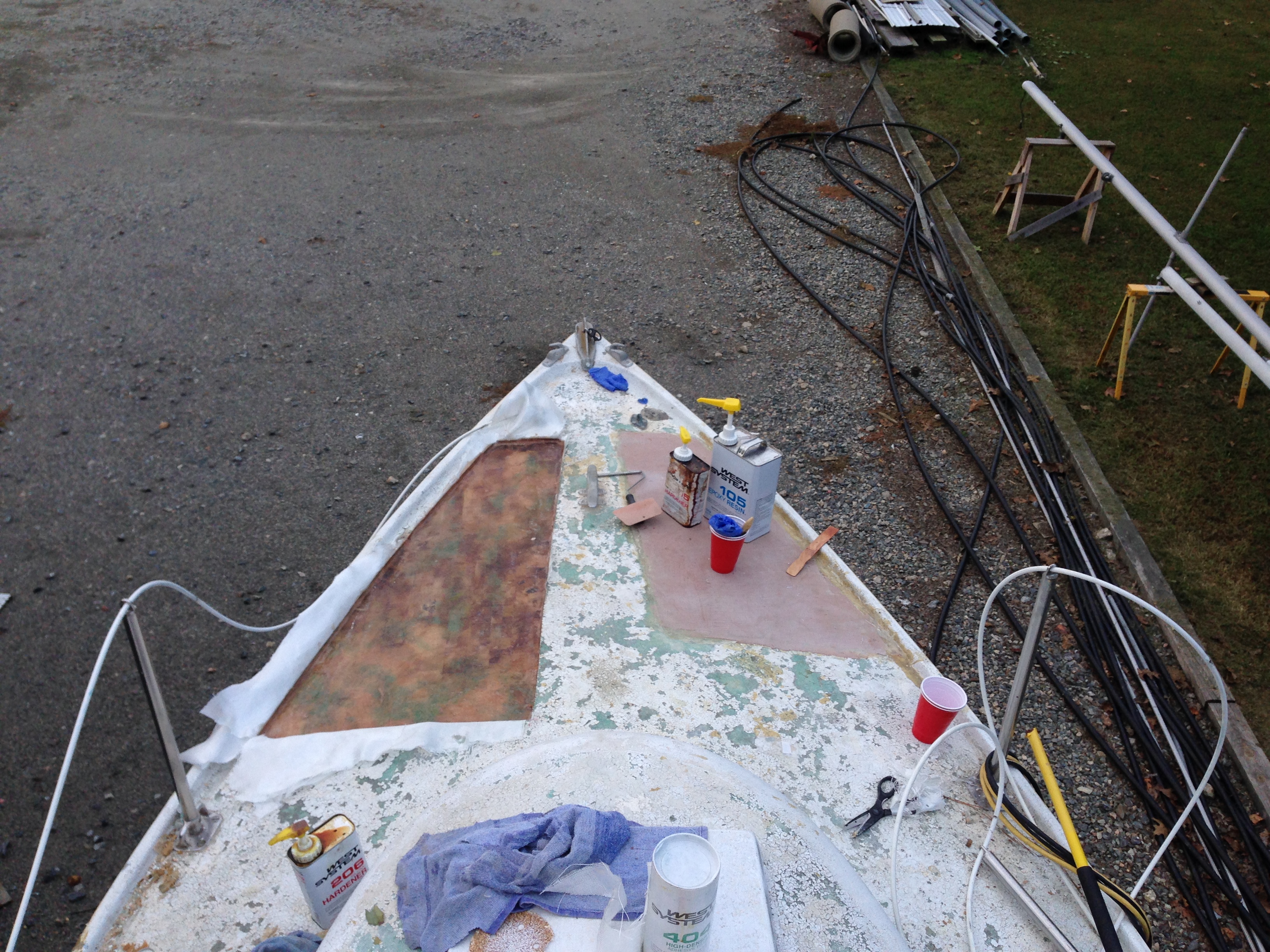 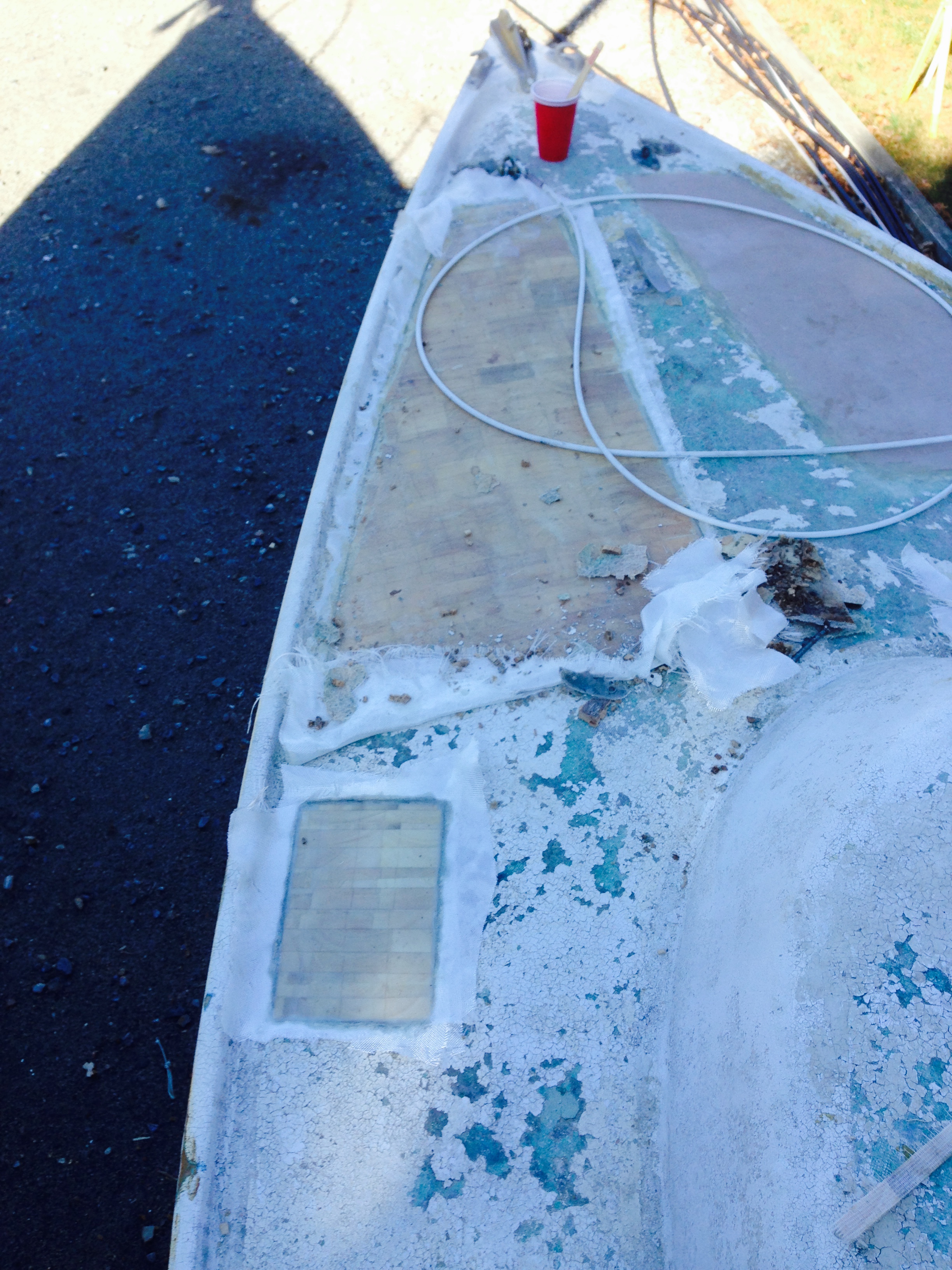 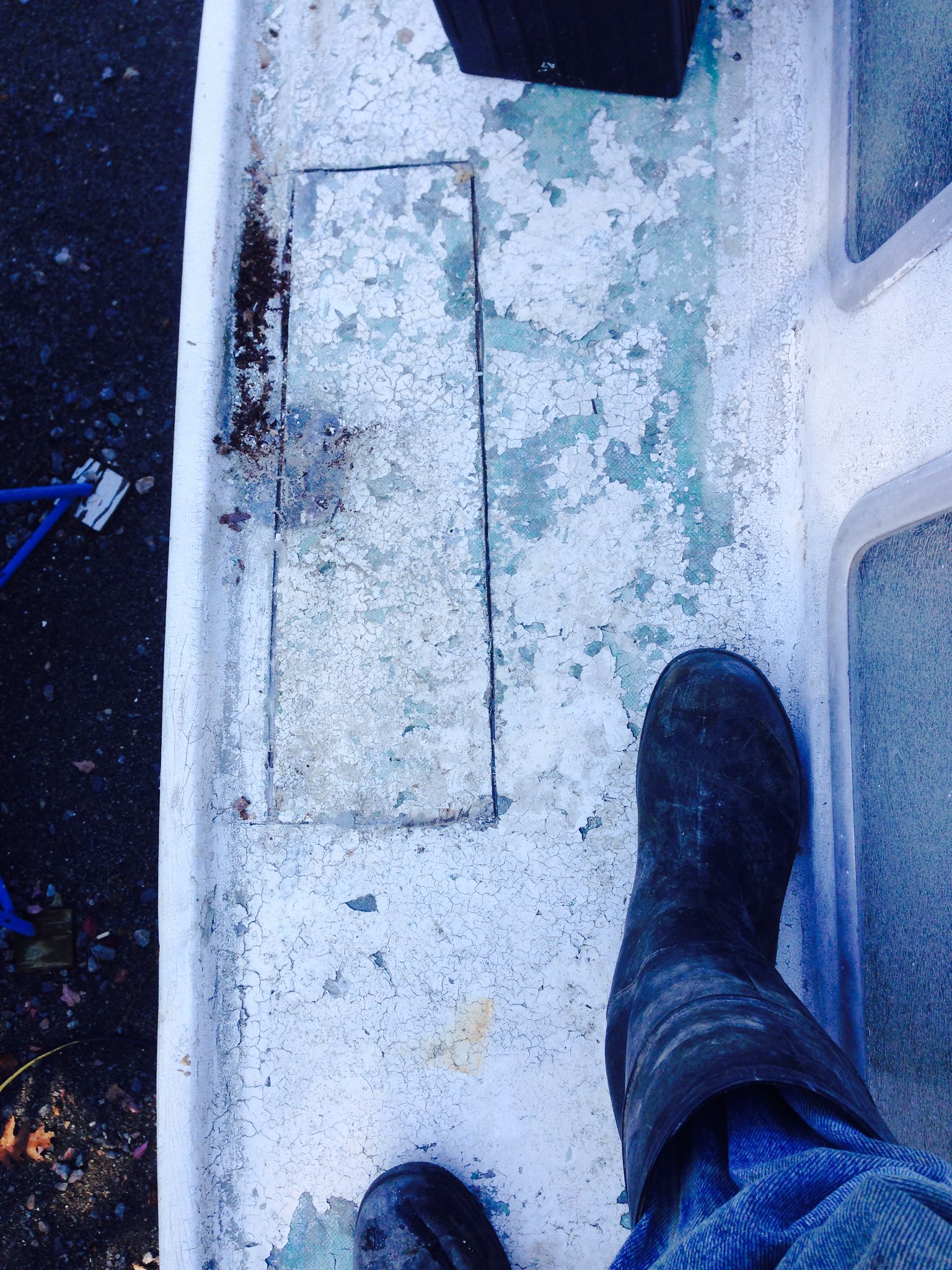 In fact these last few sections have gone pretty quickly- I’ve almost gotten good at it. As you can see in the last picture, for some portions I was able to re-use the upper layer of decking instead of laying in new glass.

In order to get at a few of these little rotten sections, I removed the rest of the stanchions, which are the vertical pieces of stainless steel pipe which hold up the lifelines. My buddy Darbs came by to lend a hand- much easier to remove bolts without resorting to this nonsense: 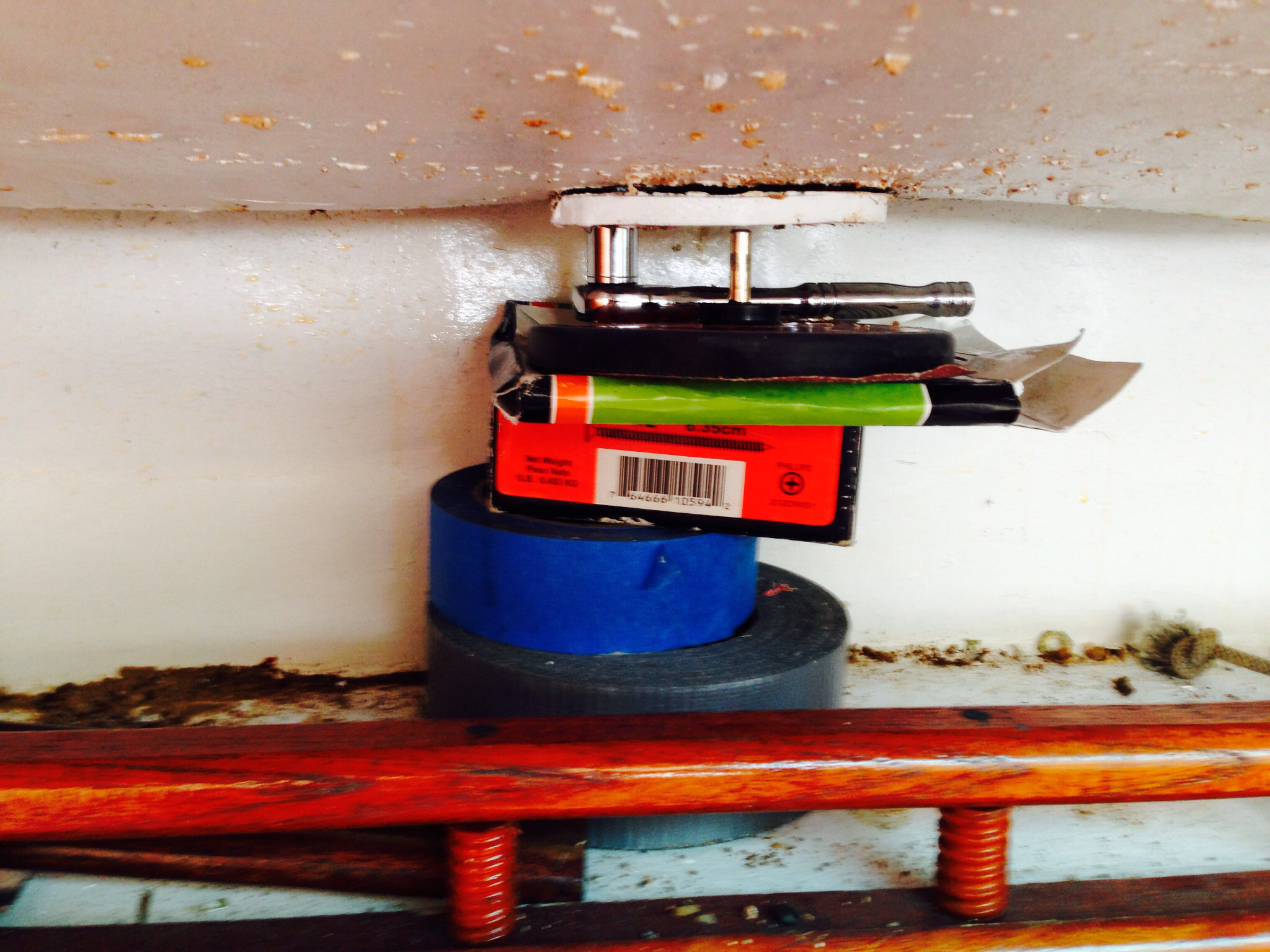 Pretty soon it will be on to winter projects- rudder and rig! And scraping the deck. 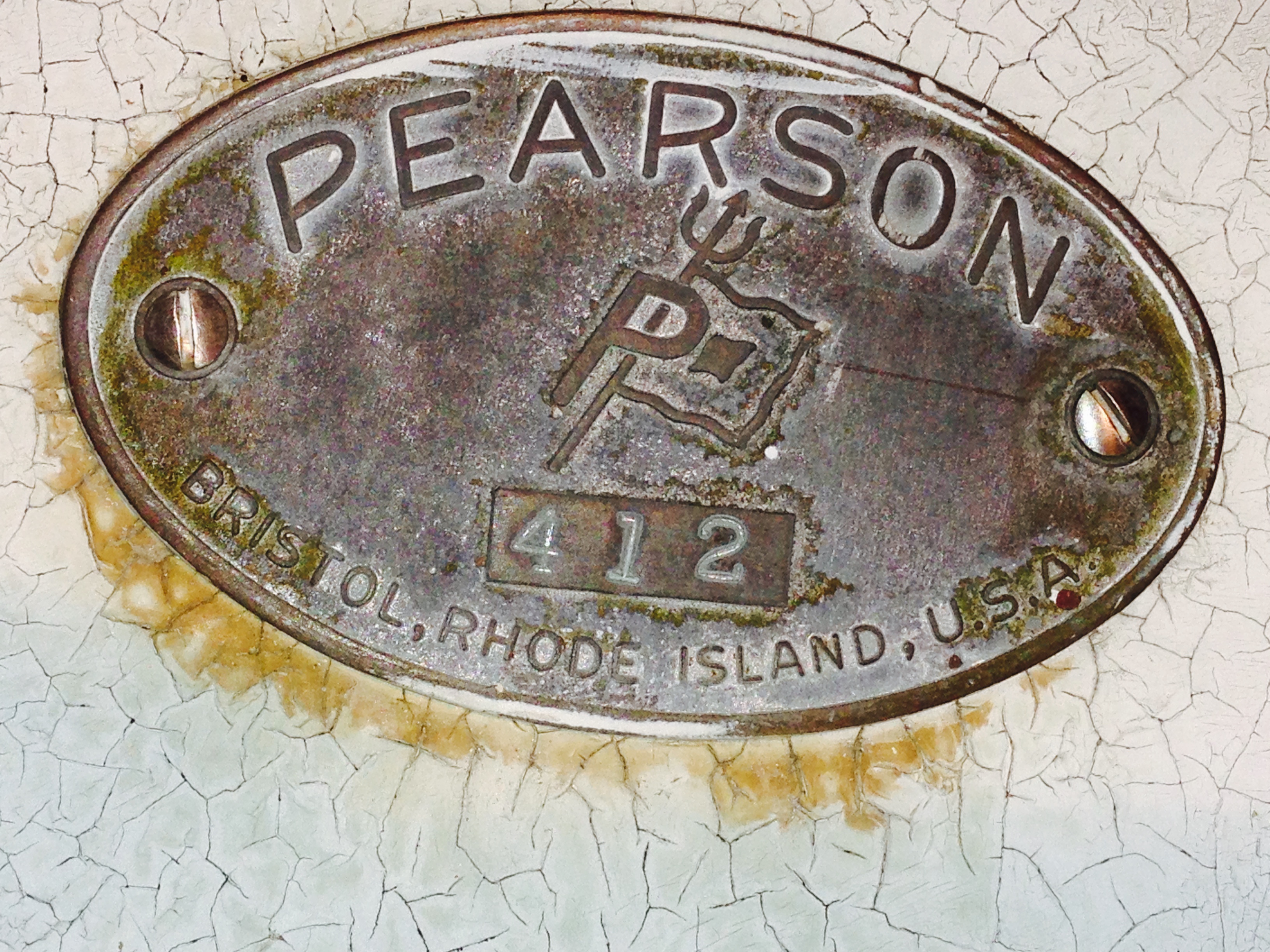