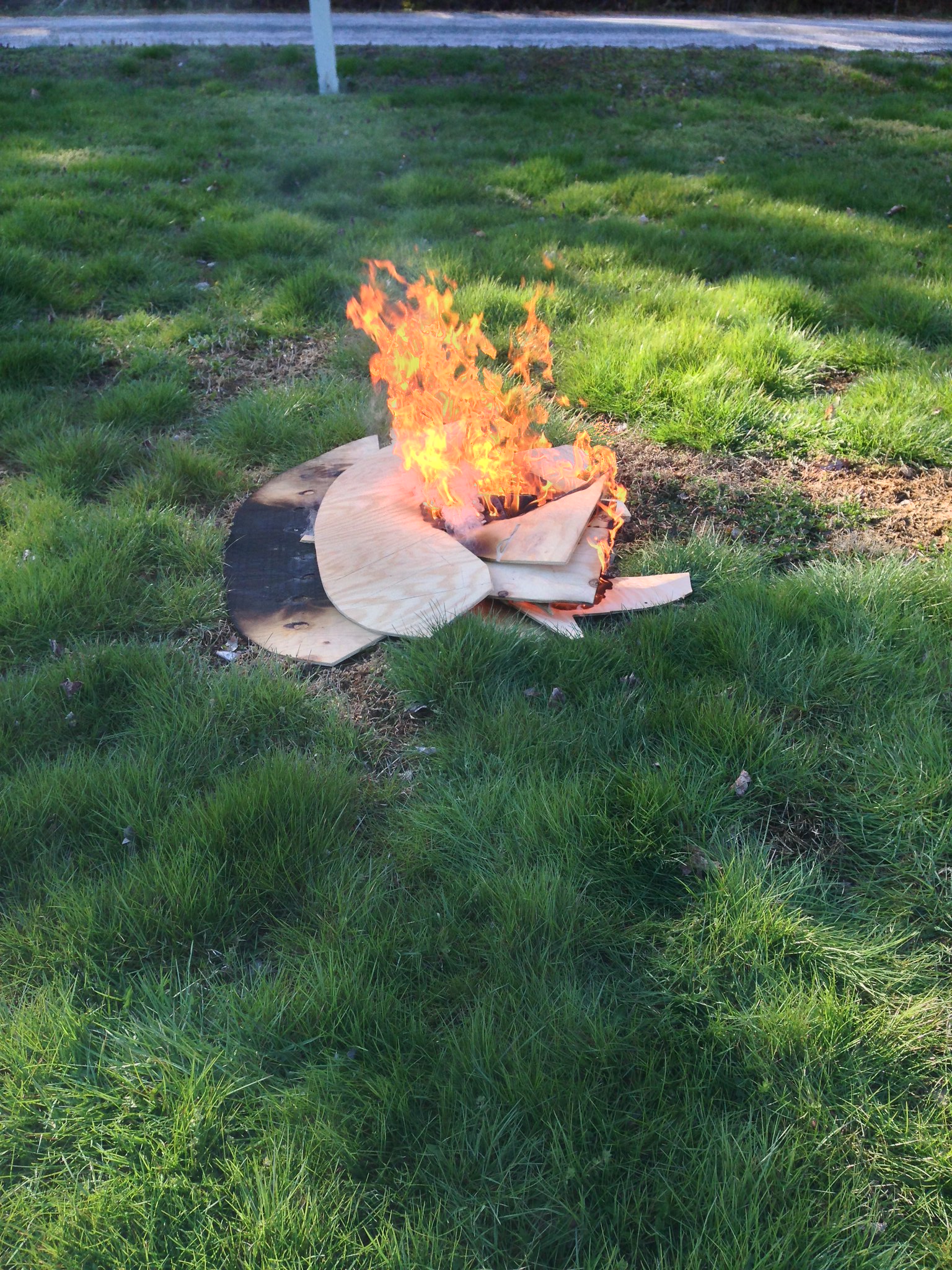 Still in a bit of a holding pattern for temps to warm up a bit, did some spring cleaning and burned a bunch of scrap from the rudder build… I never did tally the total number of mock-ups I ended up making. Let’s just say I enjoyed burning them. I replaced the diaphragm and the flapper valves on the bilge pump while watching the fire die down. 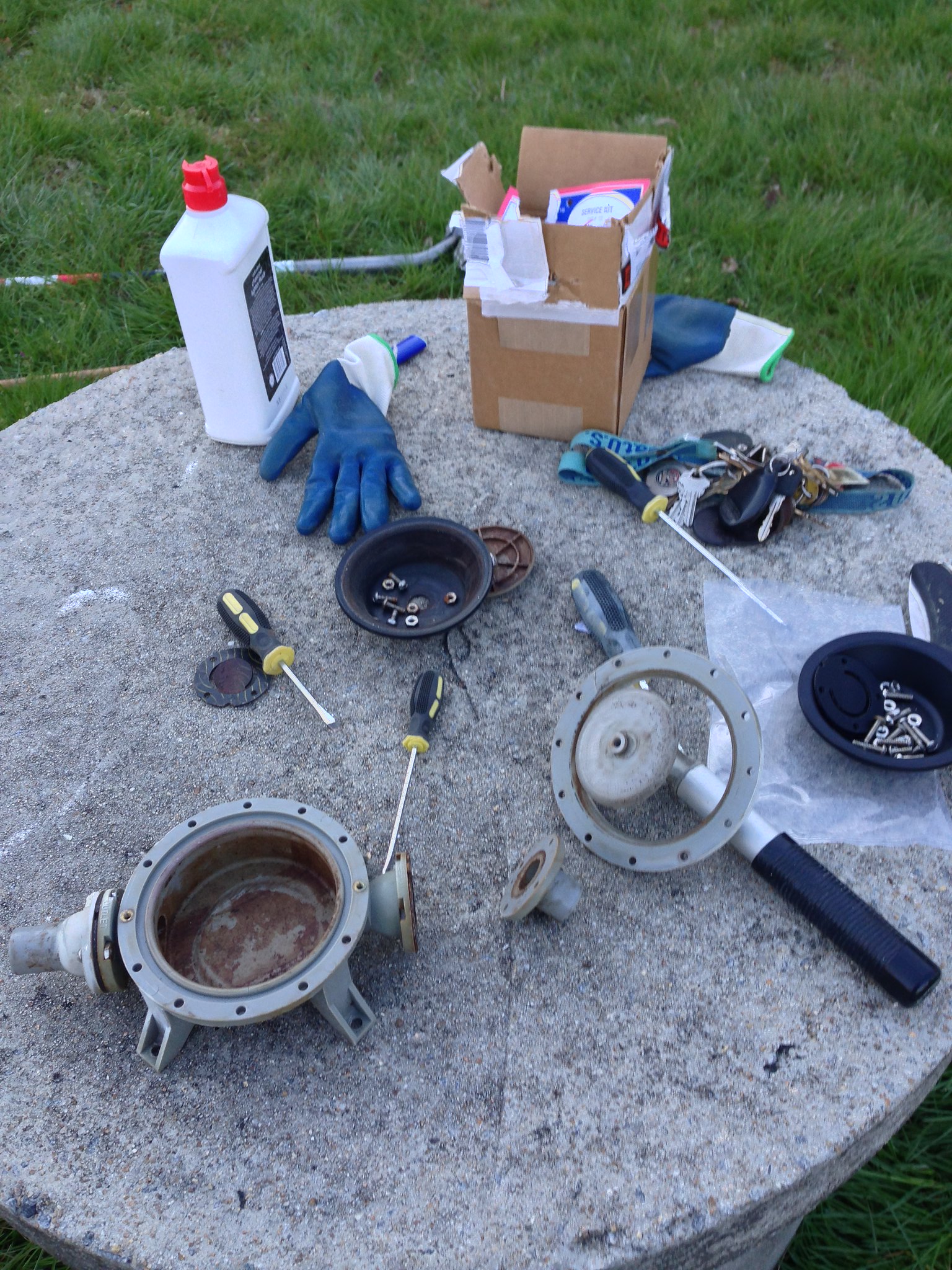 The interior of boat warms up pretty good over the course of the day, so last time I was out there I finished up some awkwardly located ‘glasswork. The effort required to take these selfies was clearly not worth it. 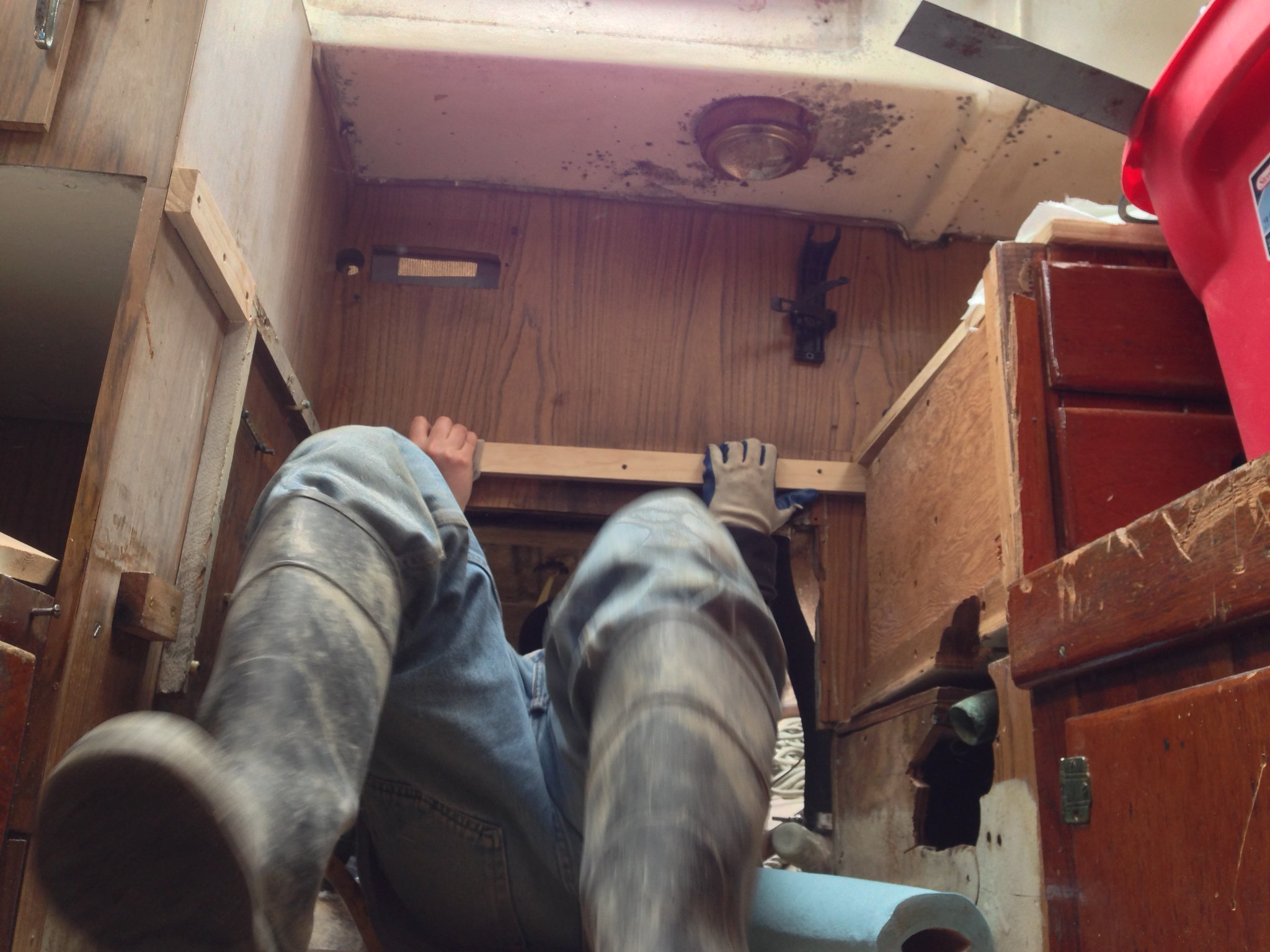 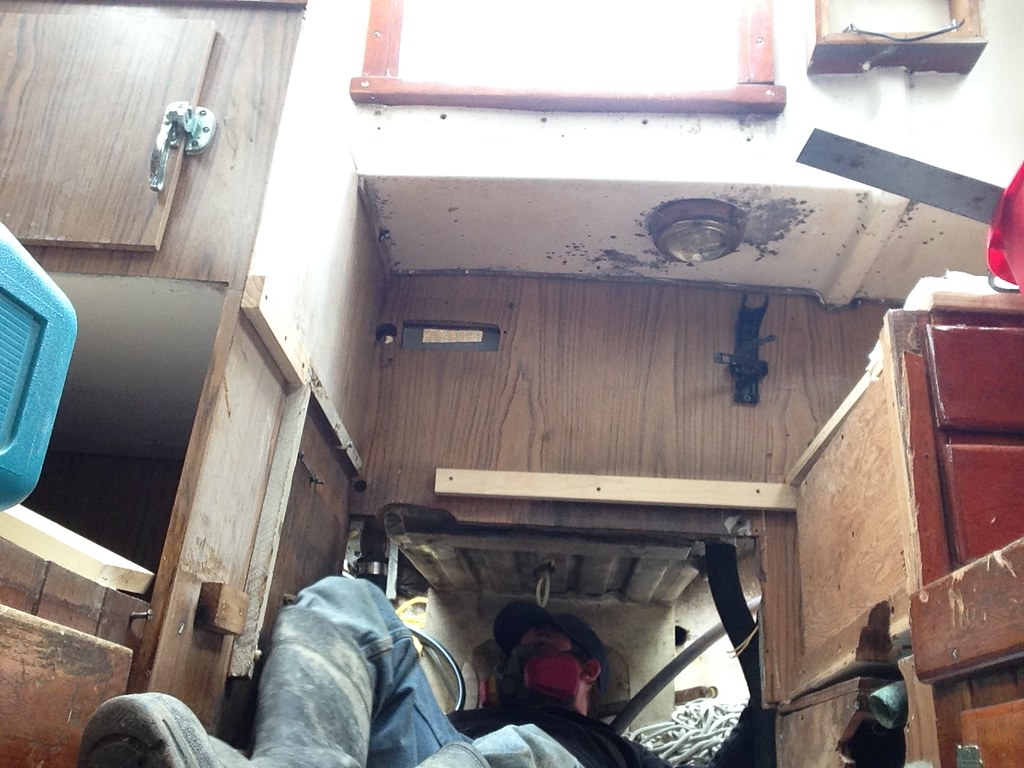 This year on Mother’s Day Weekend Ryan and I will be joining family and friends at the Race for the Cure to celebrate my mother in law, a two-time, 17 year survivor of breast cancer. If you feel so inclined, we’re raising some money for breast cancer research over yonder, thanks! Walk This Way for Renee!

A state in the extremities caused by prolonged exposure to high-frequency vibrations, characterized by a pins and needles sensation in the phalanges, reduced fine motor control, and cognitive impairment. 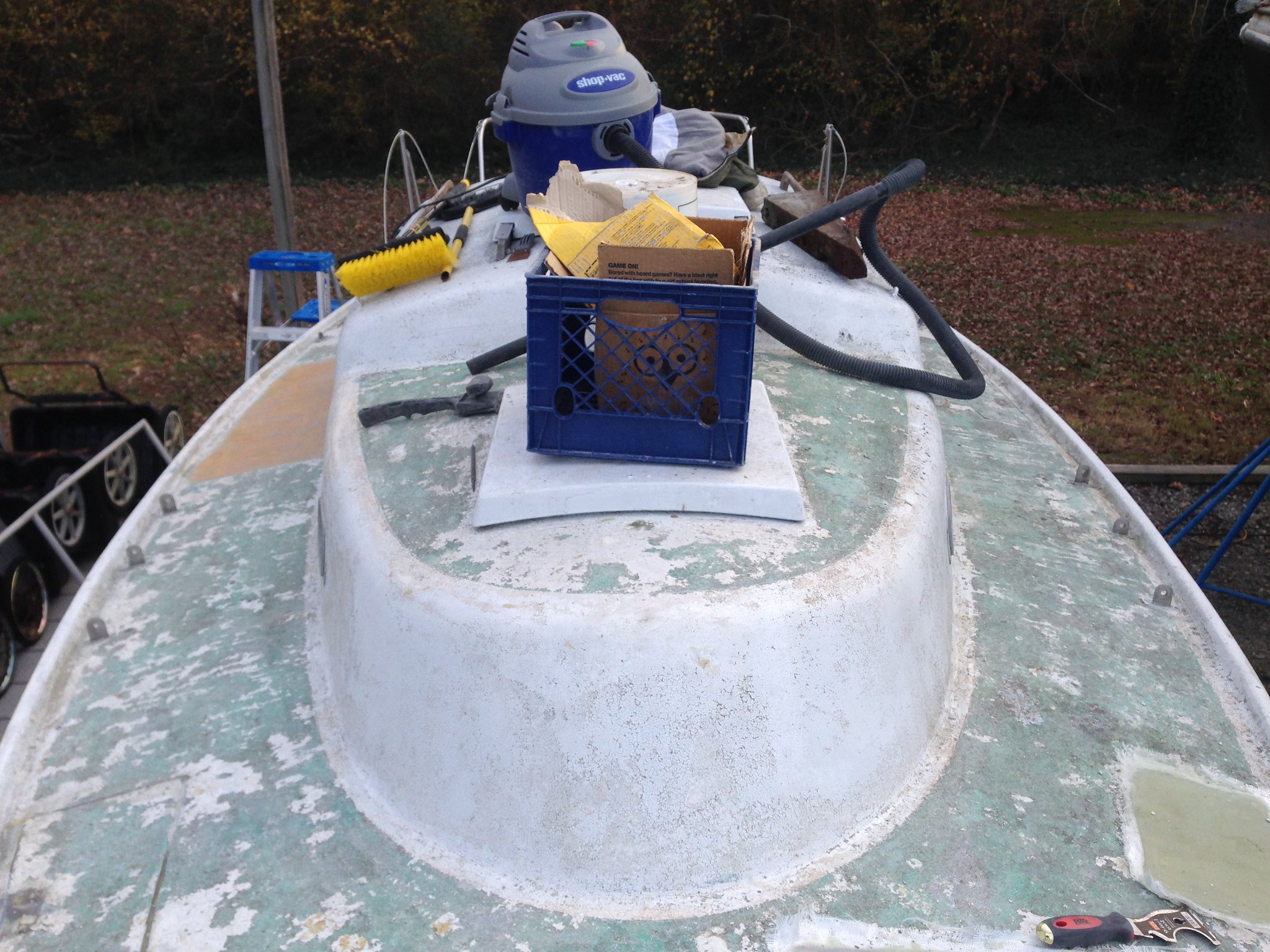 The next major project is repainting the deck, I’ve got everything prepped for an epoxy coat, just waiting on some warmer weather. After scrubbing the deck and sanding everything with 60 grit, I realized that I will have sanded just about every inch of the boat, inside and out, twice or more by the time we launch. I’m really sick of sanding.

In the meantime I’ve knocked out some little odd jobs- I switched out the cockpit drain thru hull hose for one a bit larger, which fits very snugly and does not leak. I fixed the cabin sole hatch thingy… 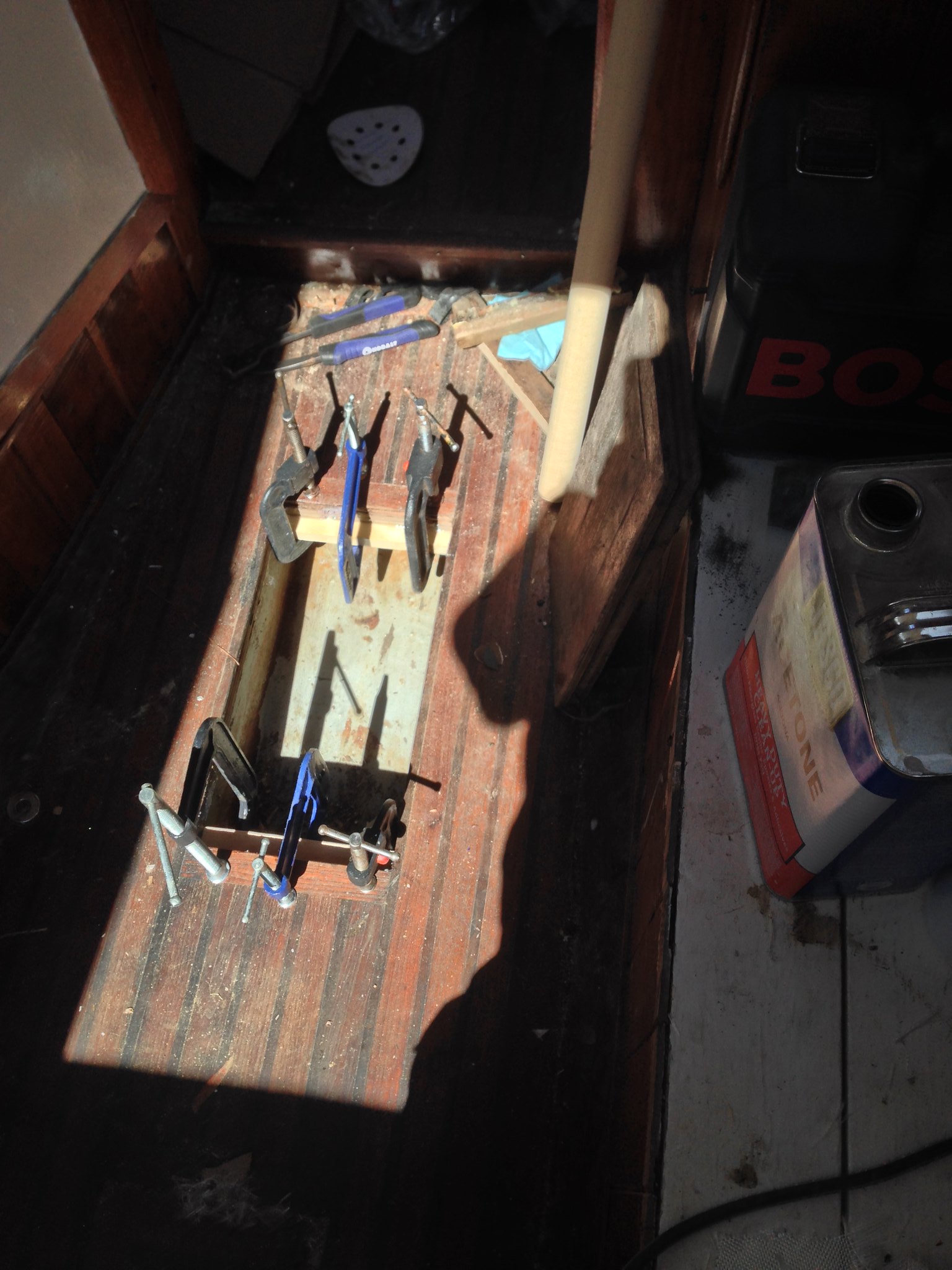 The hatch sits on two wood ledges that were previously held in place with gorilla glue, I think. A few weeks back I stepped on the hatch and busted right through the cabin sole! So that is now properly affixed.

I cut out the last section of the counter-top, which will also be the top stair of the companionway ladder… 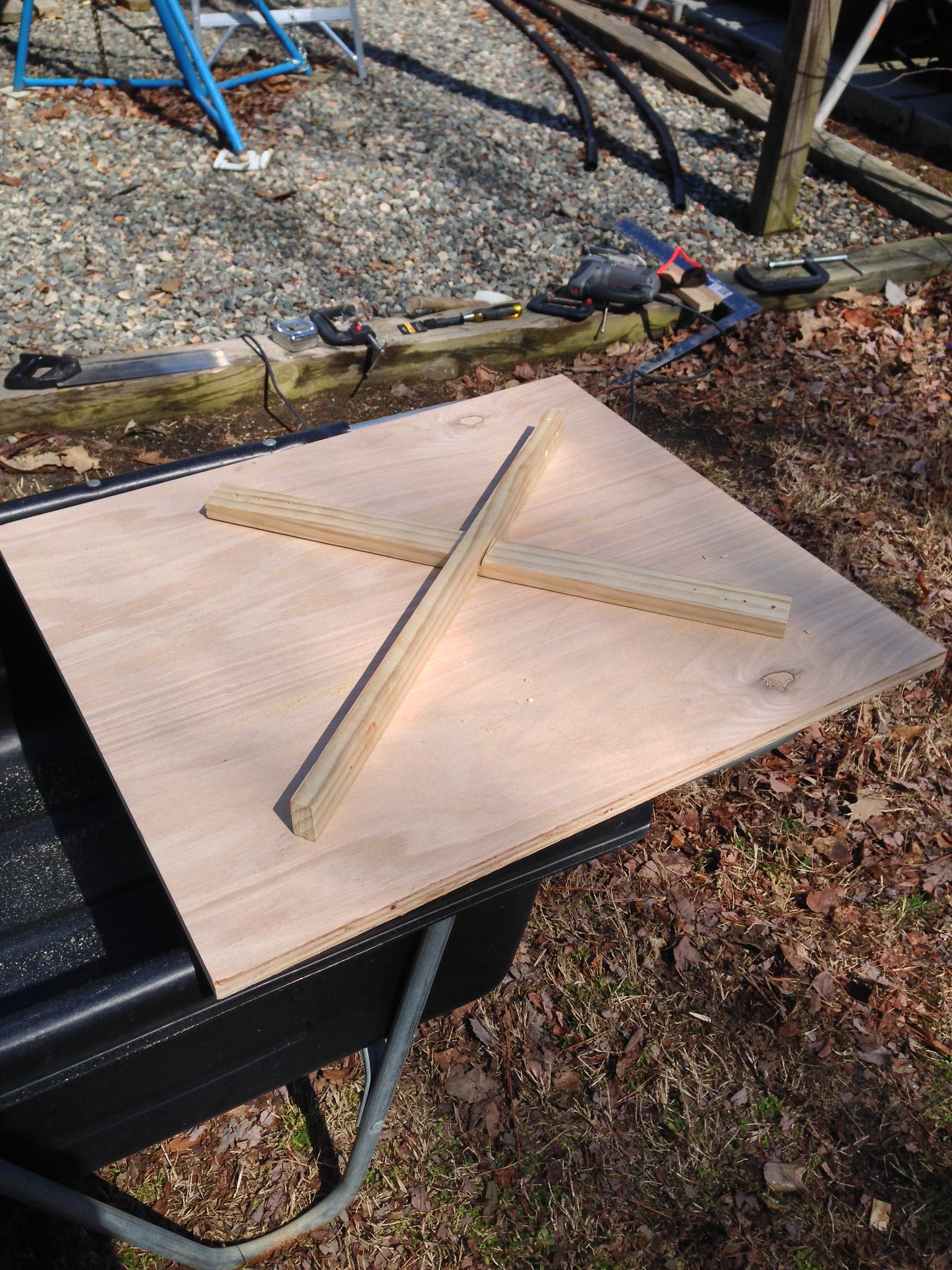 If the bracing looks asymmetric, that’s because it is. I left room for the sink, which is currently not-procured, and therefore of unknown dimensions. 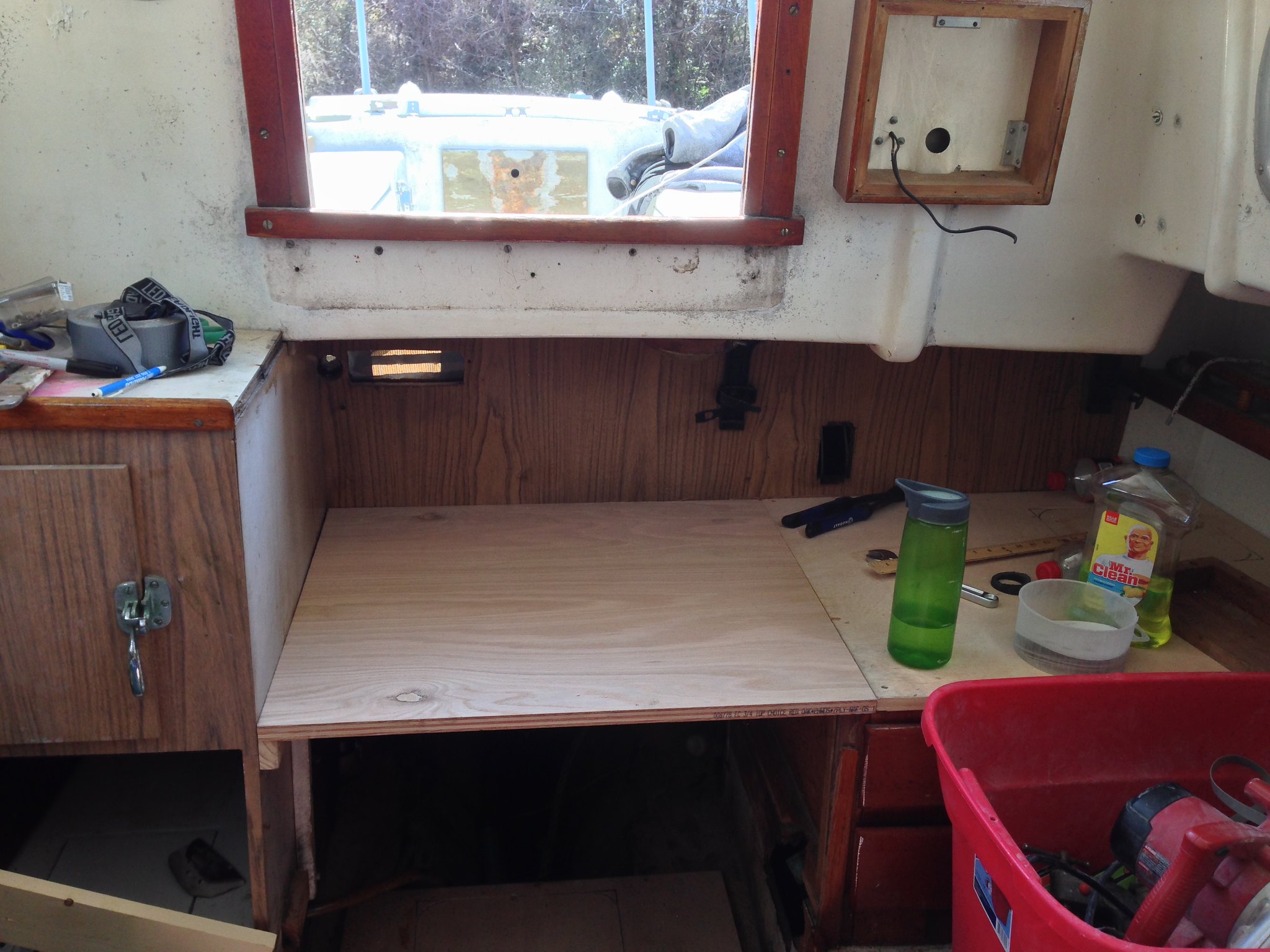 There’s a biiiiiiiit of a gap at that back corner, but I’m gonna blame that on Pearson. My cuts are square. Ish.

Finally, the old manual bilge pump stopped bilgeing. It seems like there’s an issue with the seals, so I ordered a rebuild kit for “THE GUZZLER,” and I think we’ll be in business. 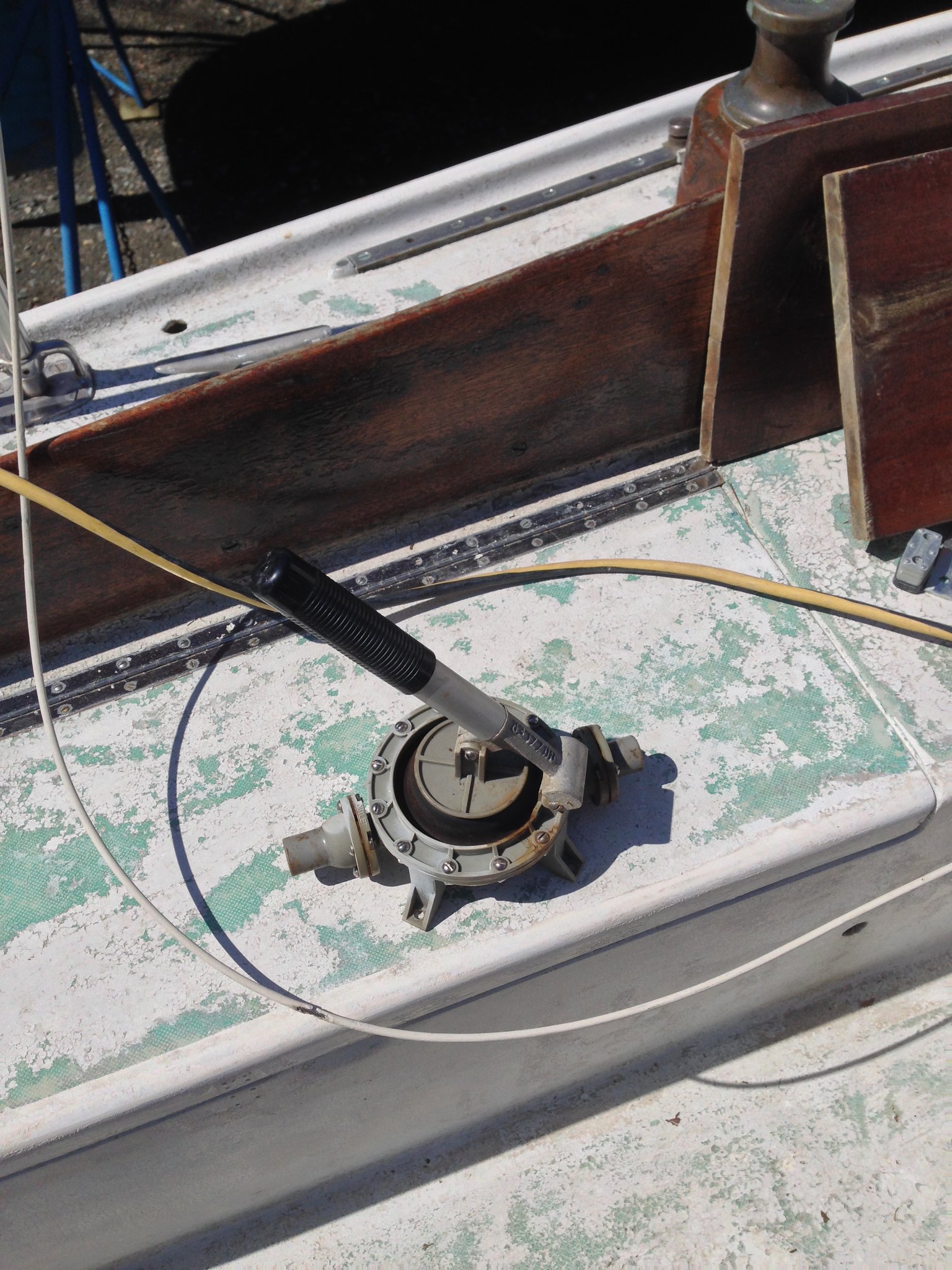 Today Ryan and I test fit the rudder and thankfully, everything fits nicely. I had to do a liiiiiiiiiiiiiiiiiitle bit of trimming to make the upper edge of the rudder fit where it’s supposed to, just a moment’s work with the jigsaw. My main concern was being able to rotate the rudder/rudder post assembly enough to drive the bolts holding the upper part of the rudder post into their respective holes. A bit hard to describe in words, it was a two-person job holding everything in place so no pics, sorry. I am extremely relieved that the 2+ months I’ve spent putting the rudder together have not been in vain. Now it’s a waiting game until the weather warms up enough for epoxy to set. In the meantime I’ve started work on putting the cabin back together a bit… 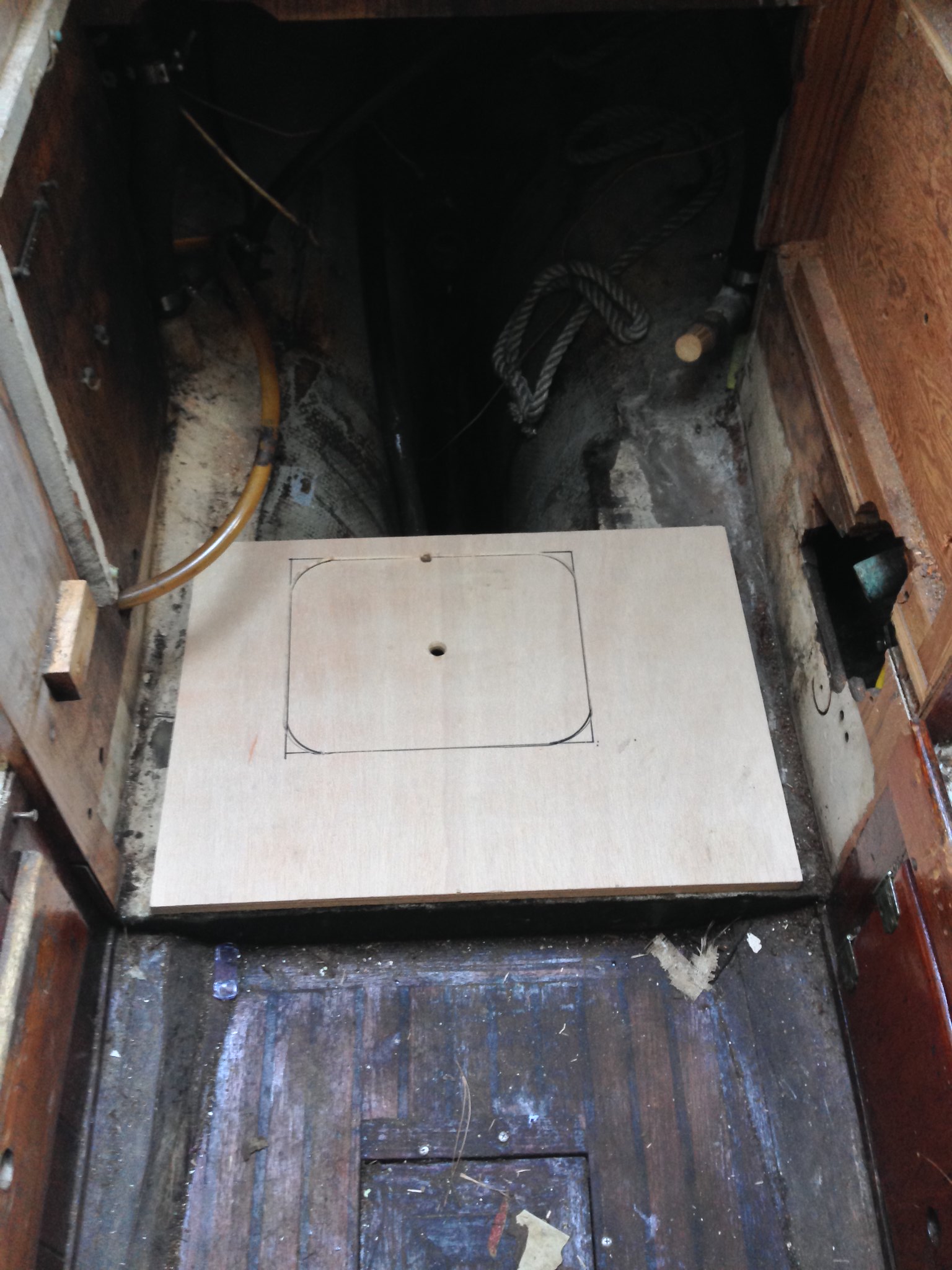 That’s the hole where the engine used to be, I put down some 1/2″ plywood on top of the the old engine bed. This will probably be where the 12V batteries end up living. I put a wee hatch in so I can access the inevitable dropped wrench in the bilge. 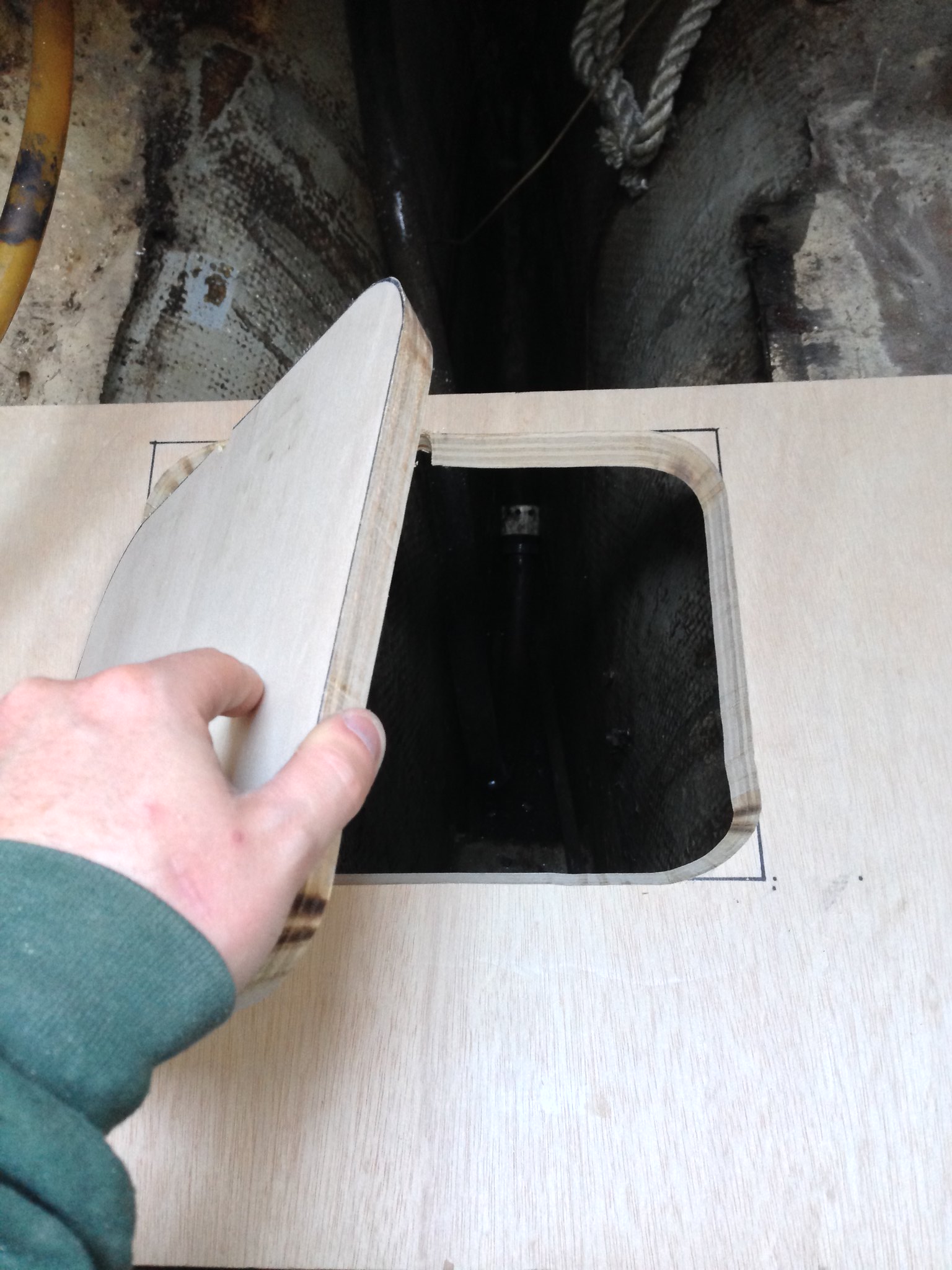 I also decided to check the cockpit drain hoses I put in a little while back for leaks. I plugged up the drains from the outside and filled the cockpit with a garden hose. The drain hose I suspected of being just a bit too short, is in fact too short, and will have to be replaced again. Oh well. While I was down there, I tried tracing the source of a mystery hose… 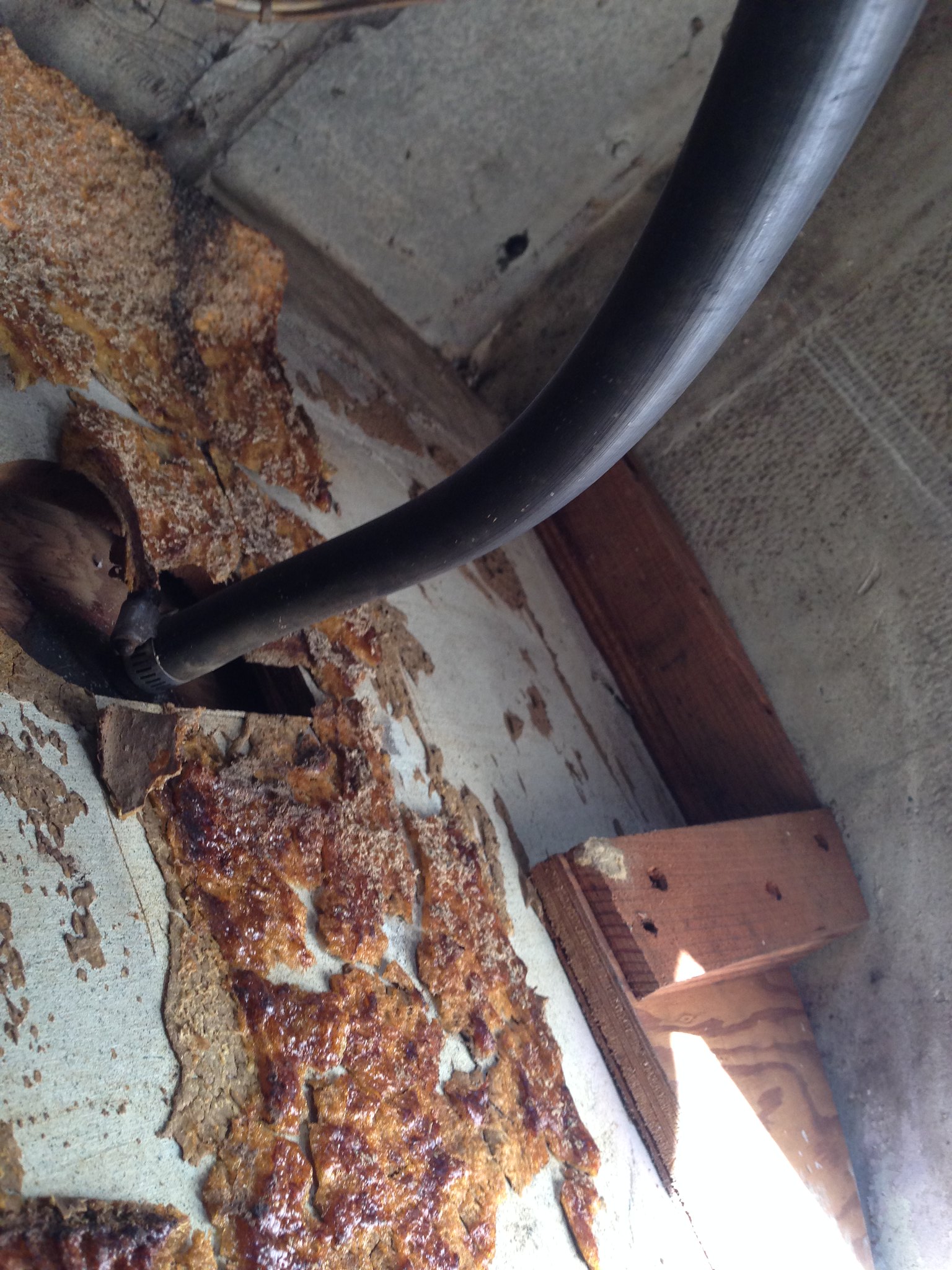 This guy runs from the starboard cockpit drain fitting to this bulkhead, and completely disappears. (That nasty crud is old insulation from when the engine lived here) I stuck my head in every locker and crevice I could think of, but this hose disappears into nothing. I suspect it may be a drain for the ice box, but there’s no drain in evidence inside the cooler. So I decided to cut it out and forget about it.

Next I started putting a new counter top in. I’m using as much of the old framing as I can. First up is the nailer that runs along the rear bulkhead… 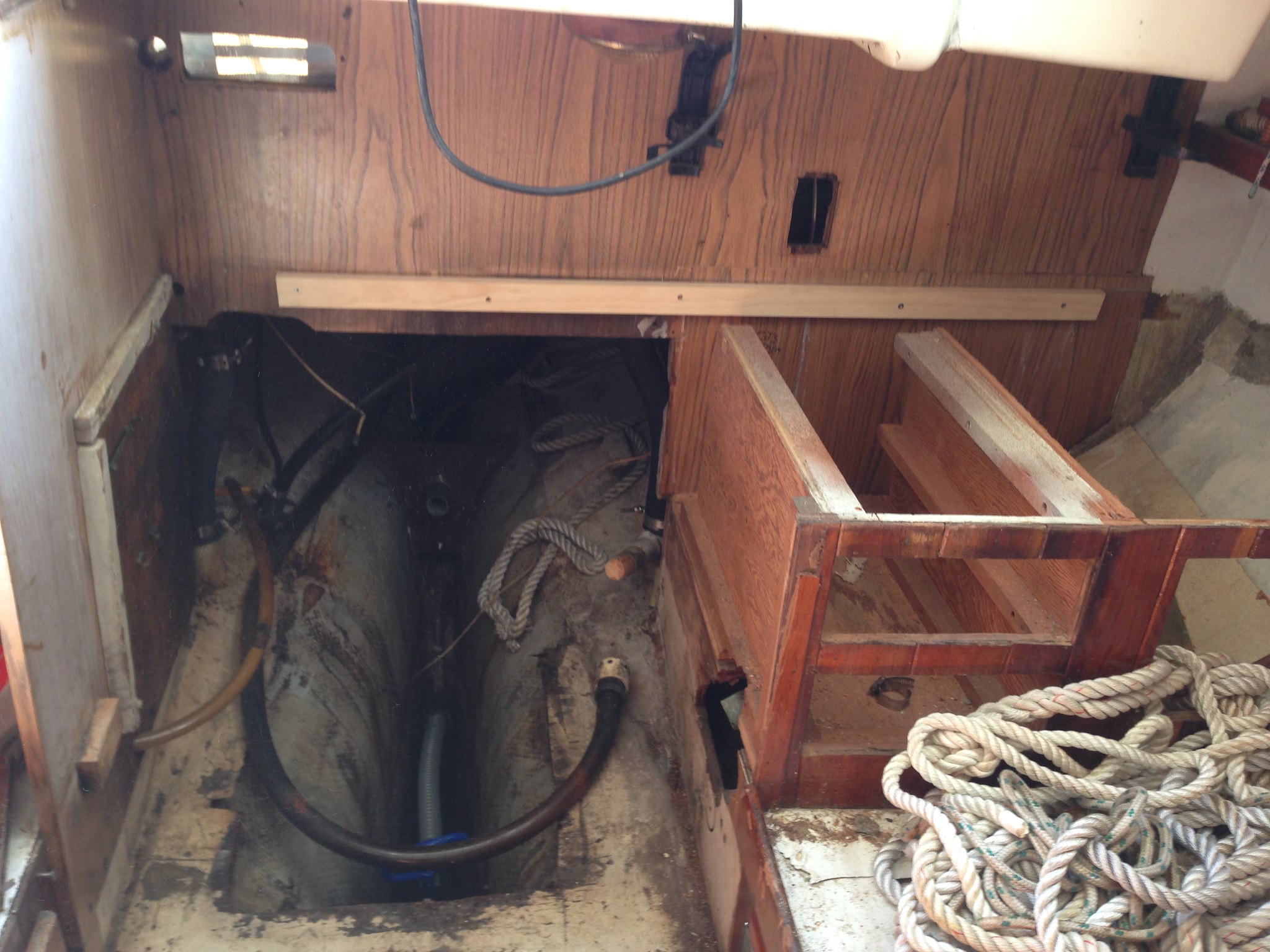 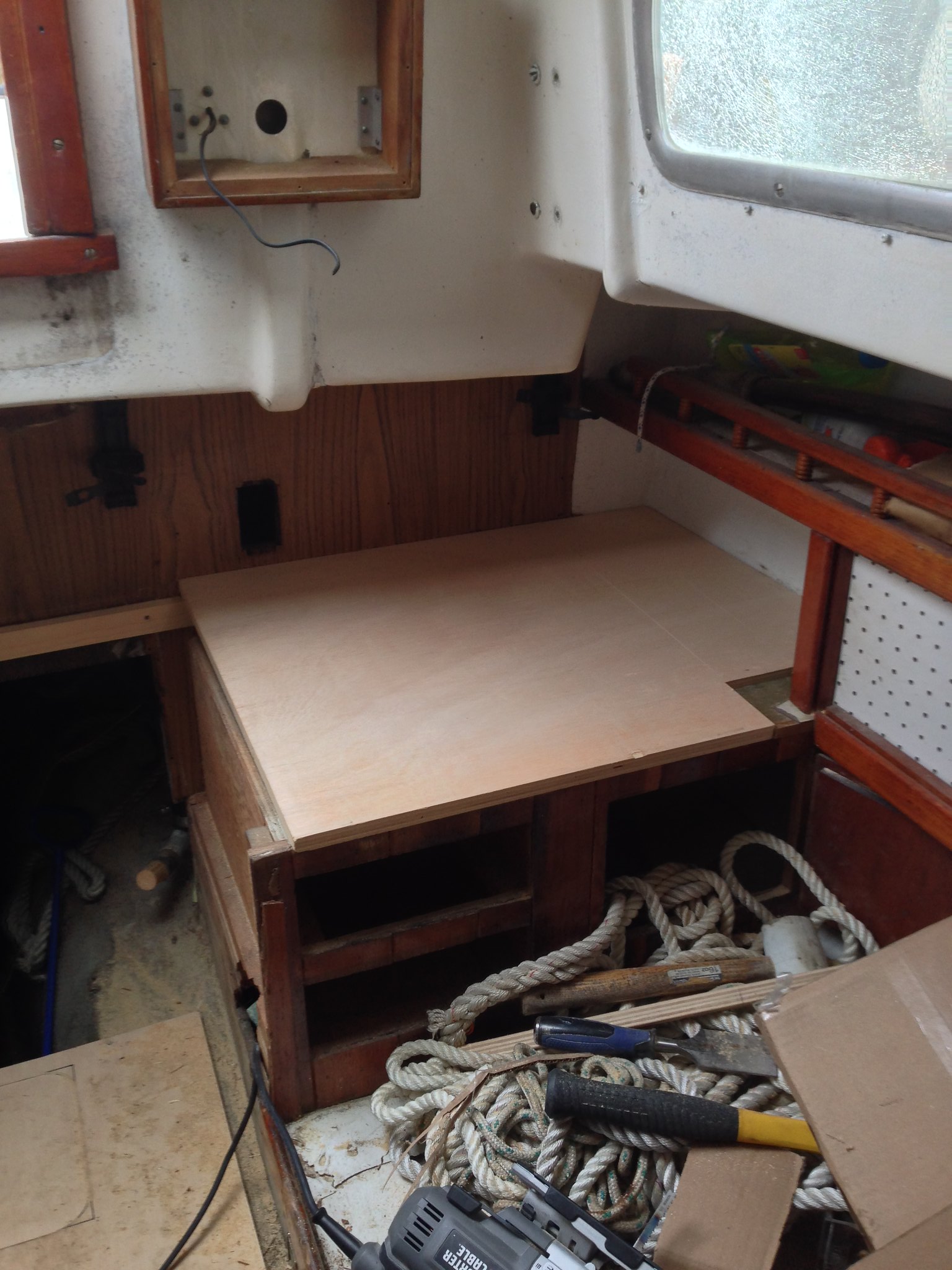 The outboard edge butts up against the hull, which is of course slightly curved. It took a bit of “try and fit” and some half-assed spiling to get it “good enough.” 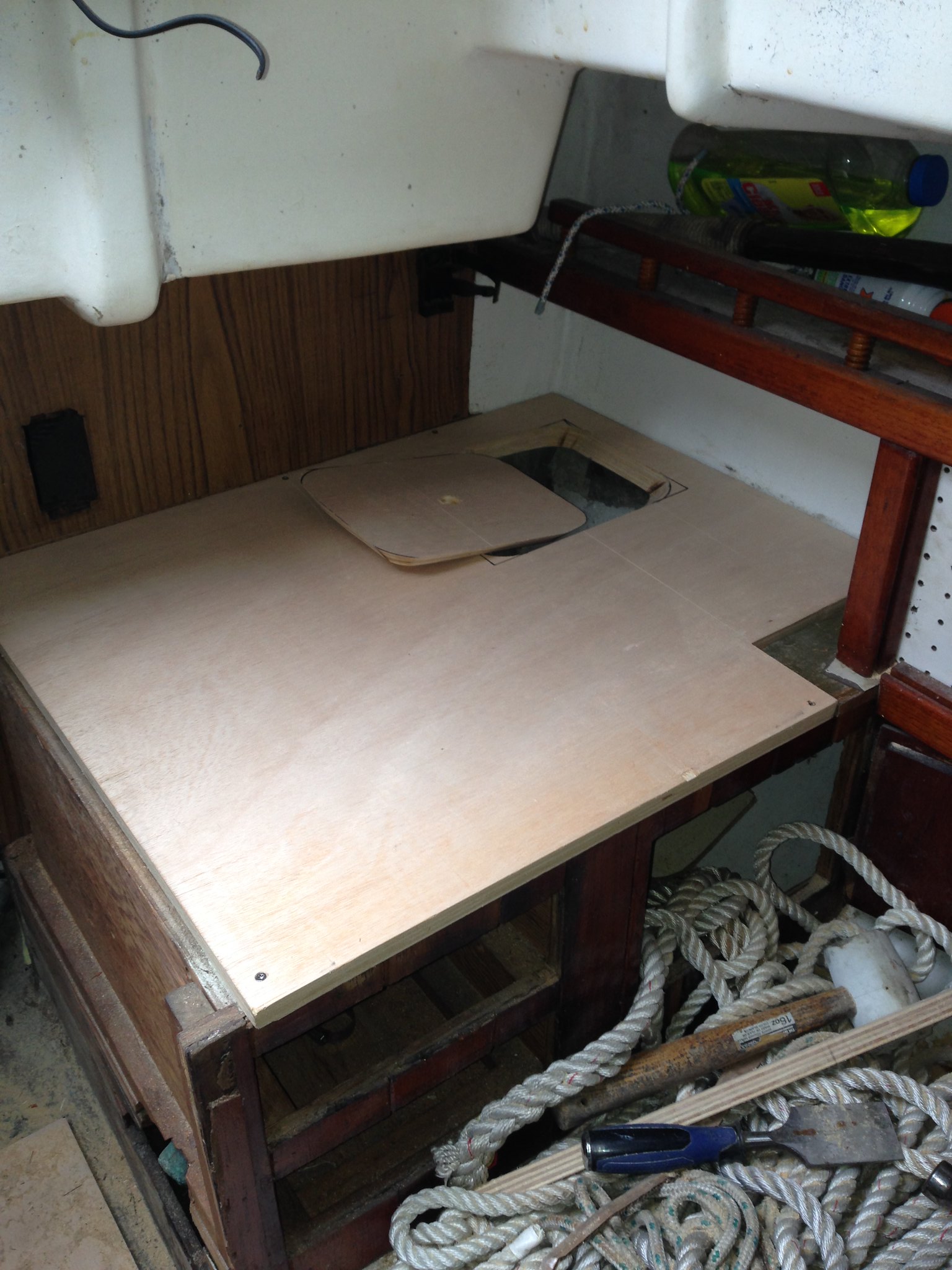 I put in another wee hatch to make it easier to get at the back of the outboard locker. As you can see this is all pretty rough and ready carpentry, but it’s a sailboat not a shrine. 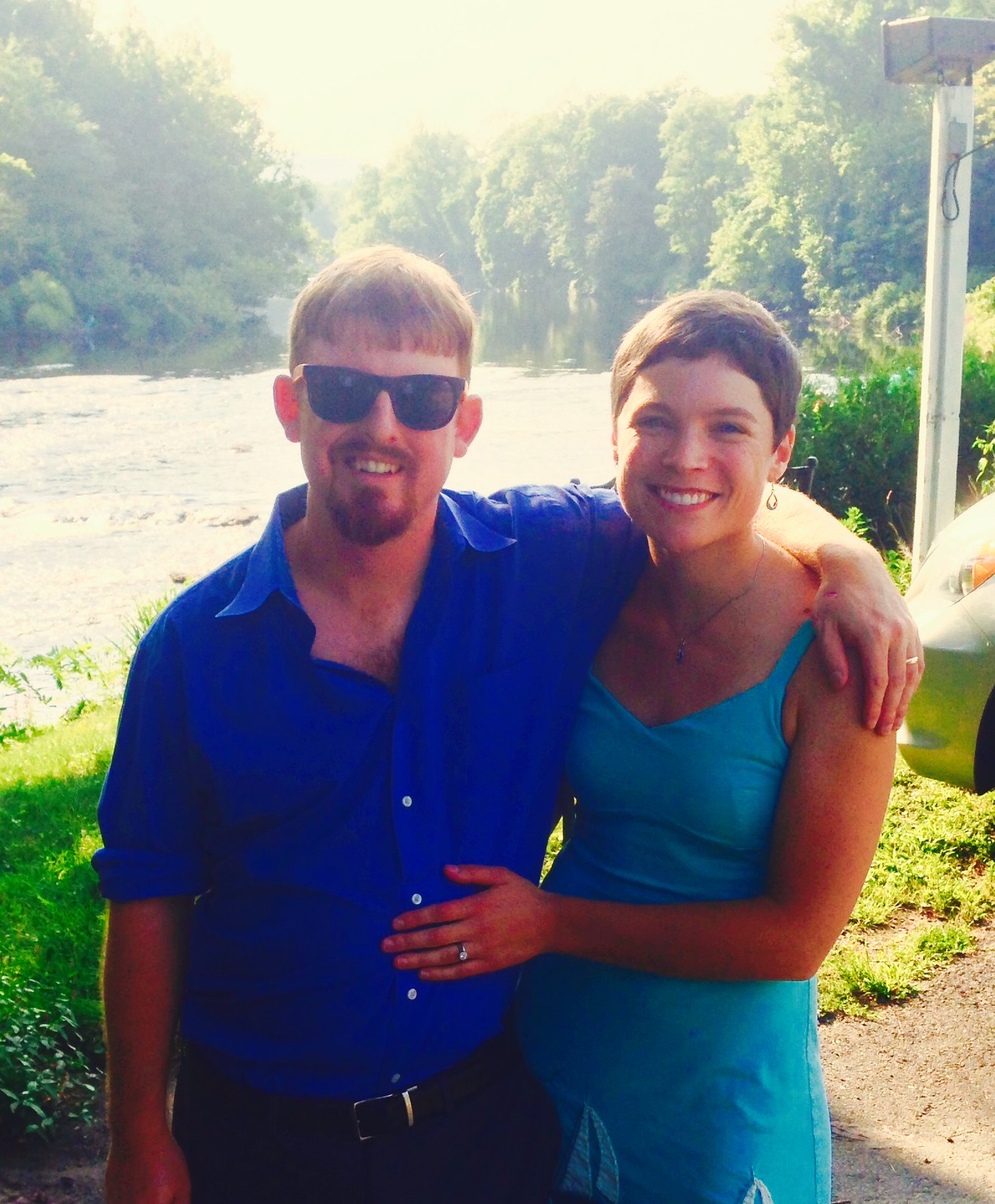 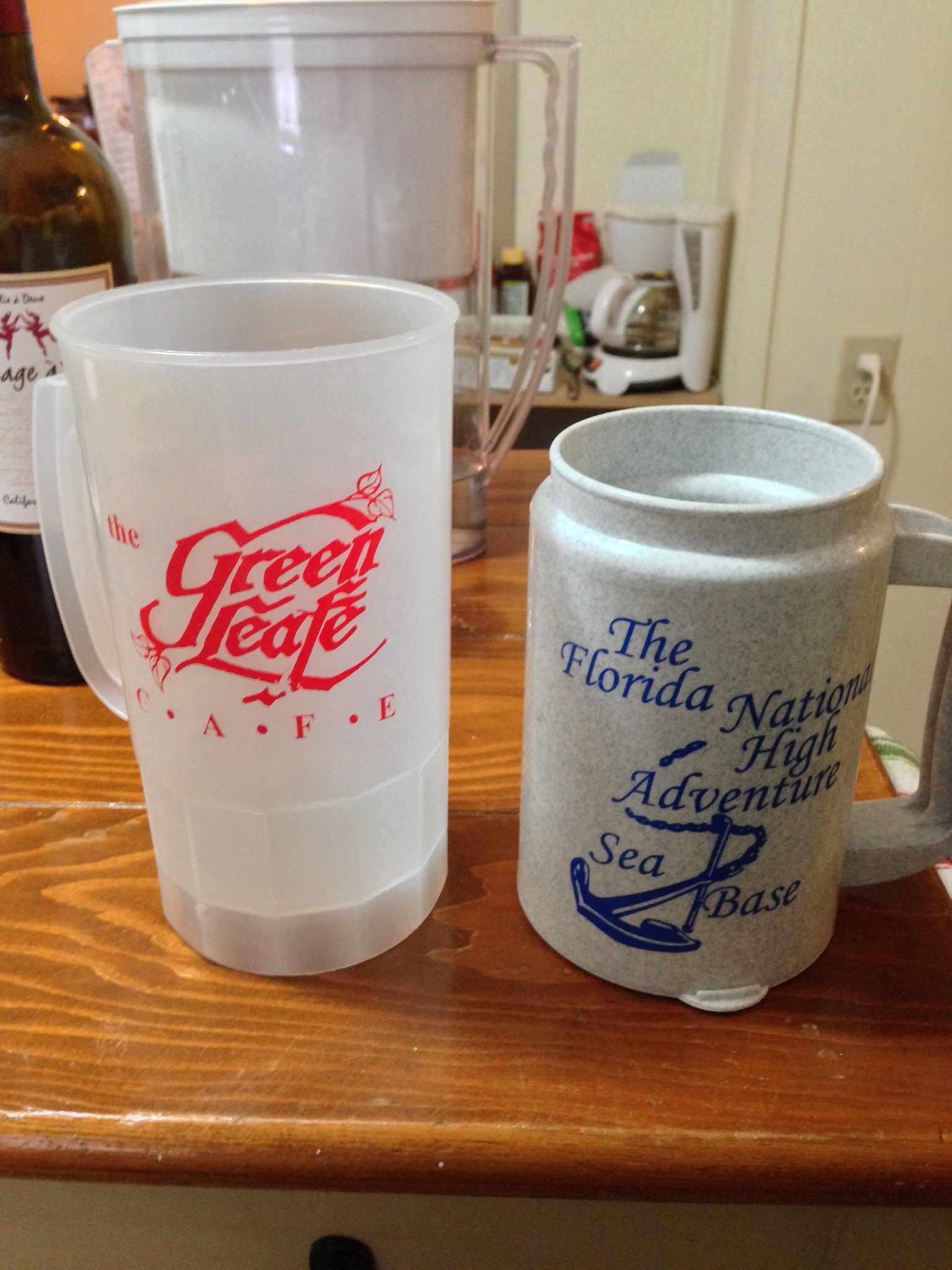 Today, I ran out of solo cups. The aforementioned memories of discounted college beer and my formative sailing experience with the Boy Scouts are now filled with epoxy residue and acetone, respectively. It was cold and snow-raining and I didn’t feel like driving to the store. Ryan gave me permission to sacrifice her Green Leafe Mug from Mug Night, and I felt it only right to match her sacrifice with one of equal gravitas. (In reality, the time since either of these chalices has been full can nearly be measured in decades…) Speaking of that snow… 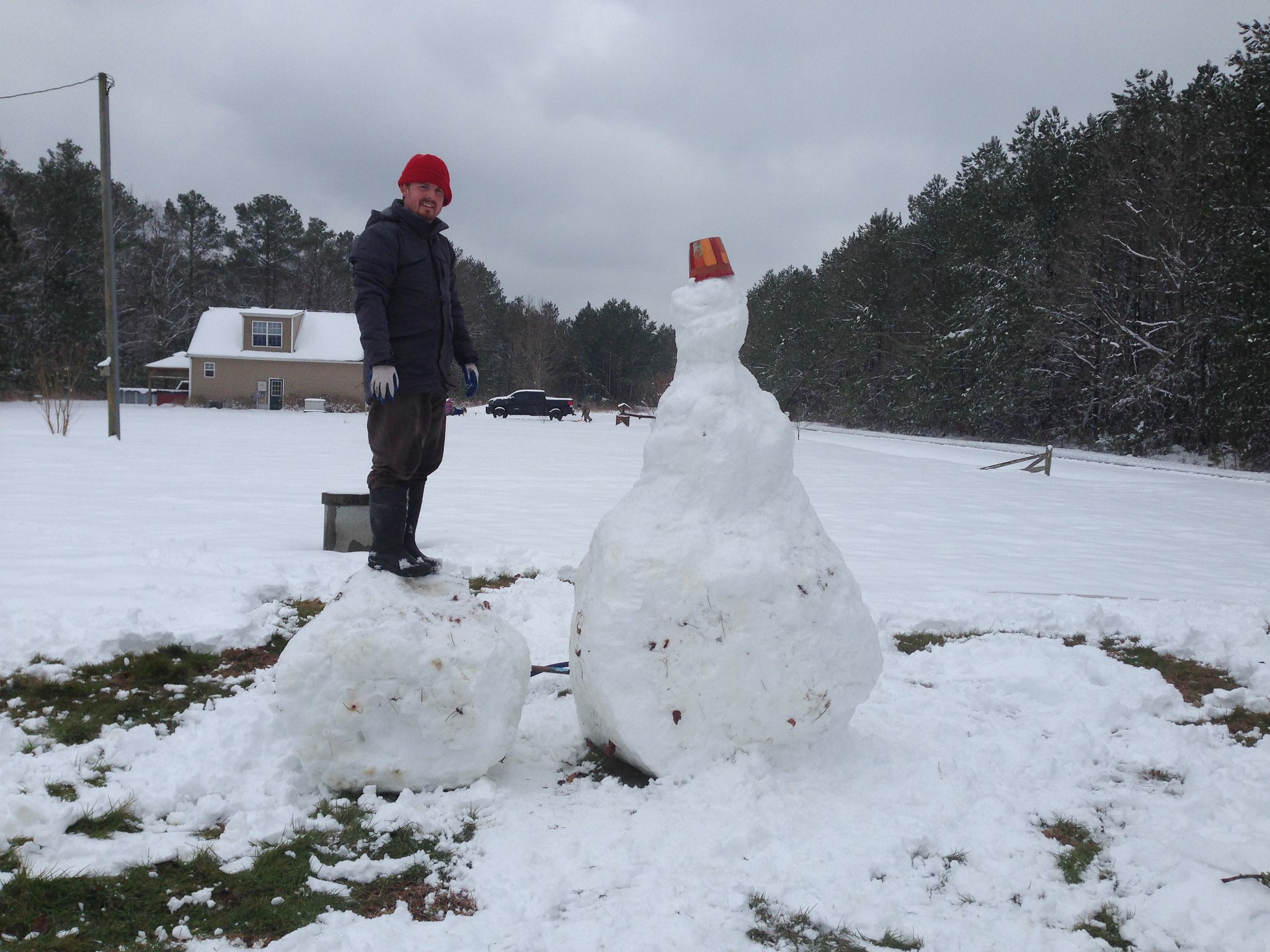 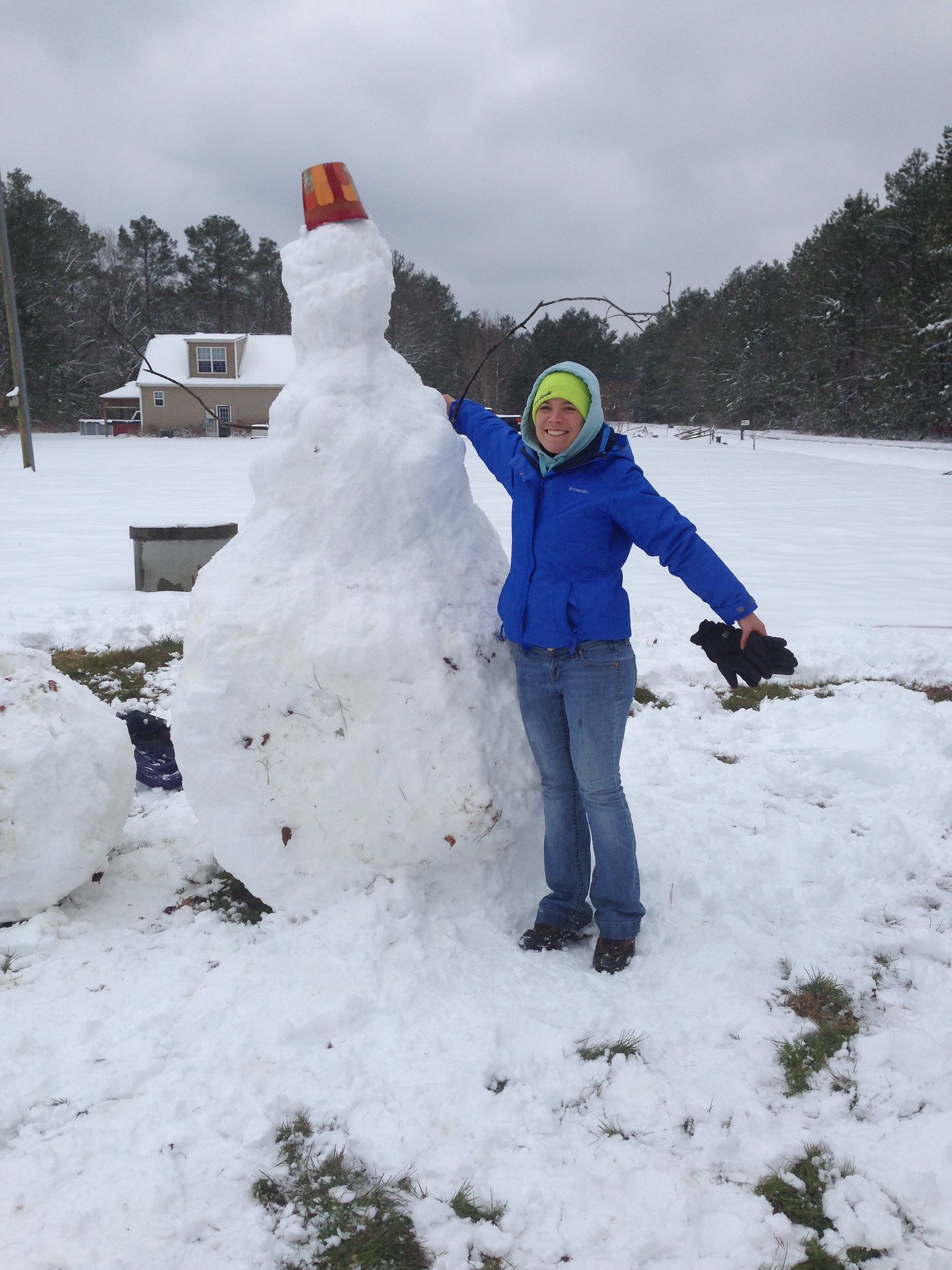 Fortunately the snow has not stalled progress on the steery-thing. After verifying one last time that everything fit where it was supposed to… 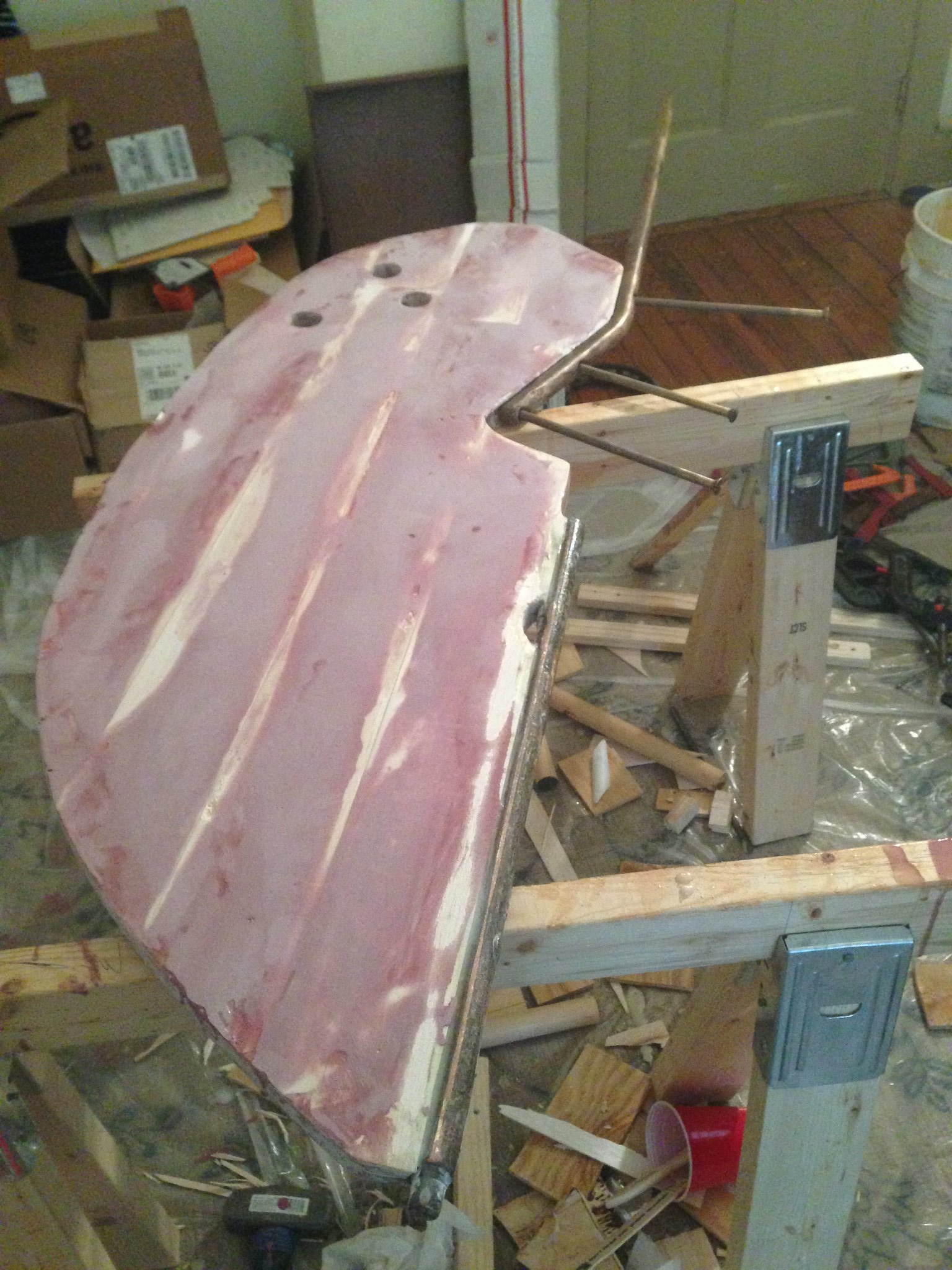 …I beveled all the edges. Fiberglass doesn’t like to take right angles, nice easy curves let the glass lie smooth and bond well. 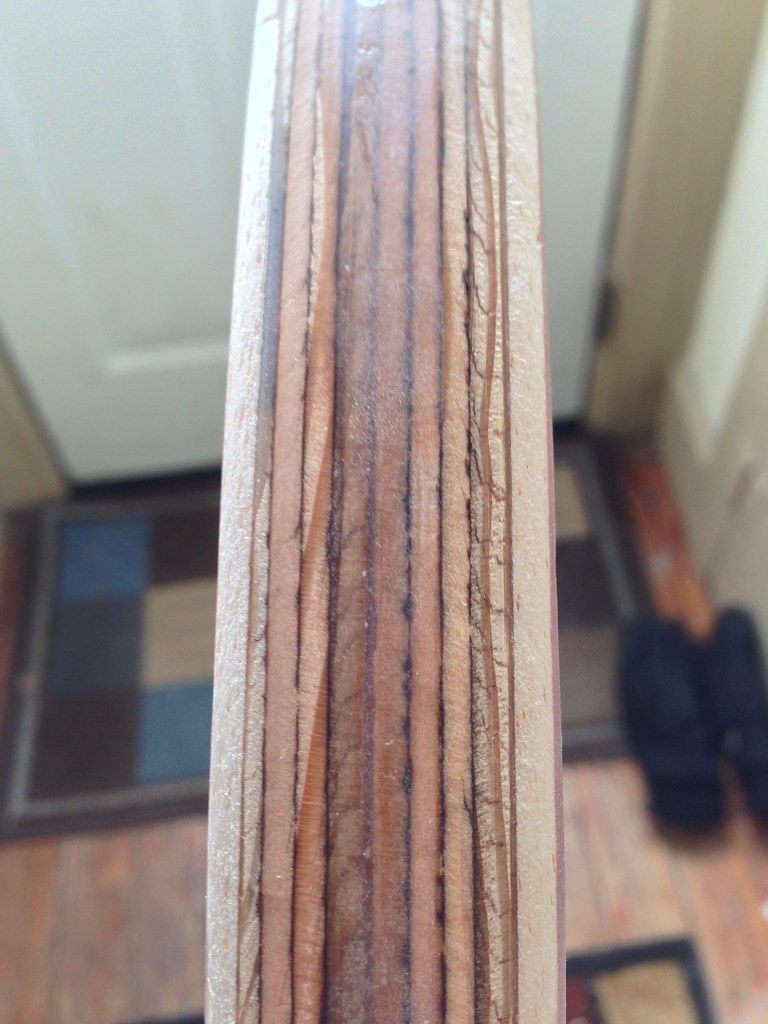 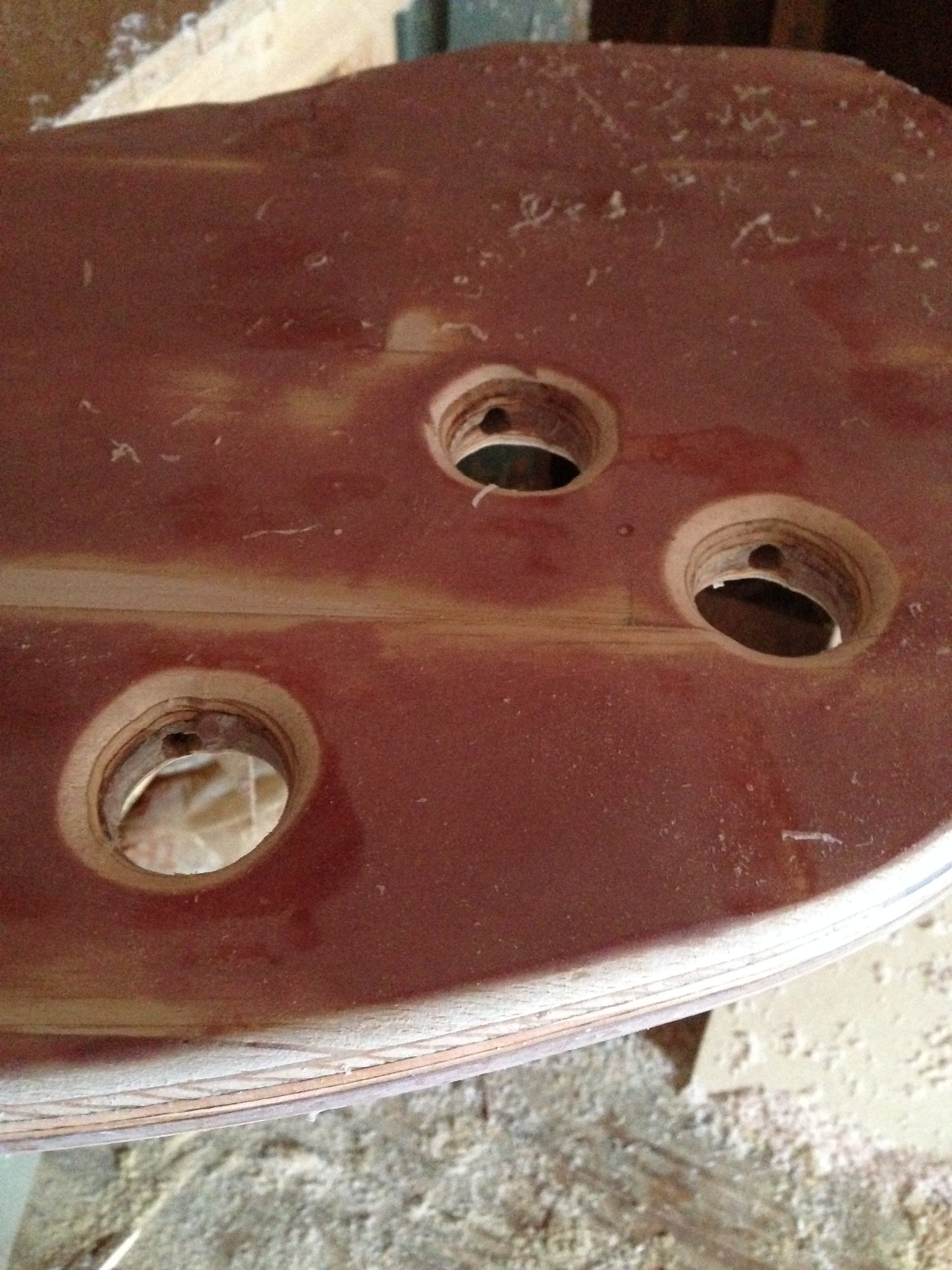 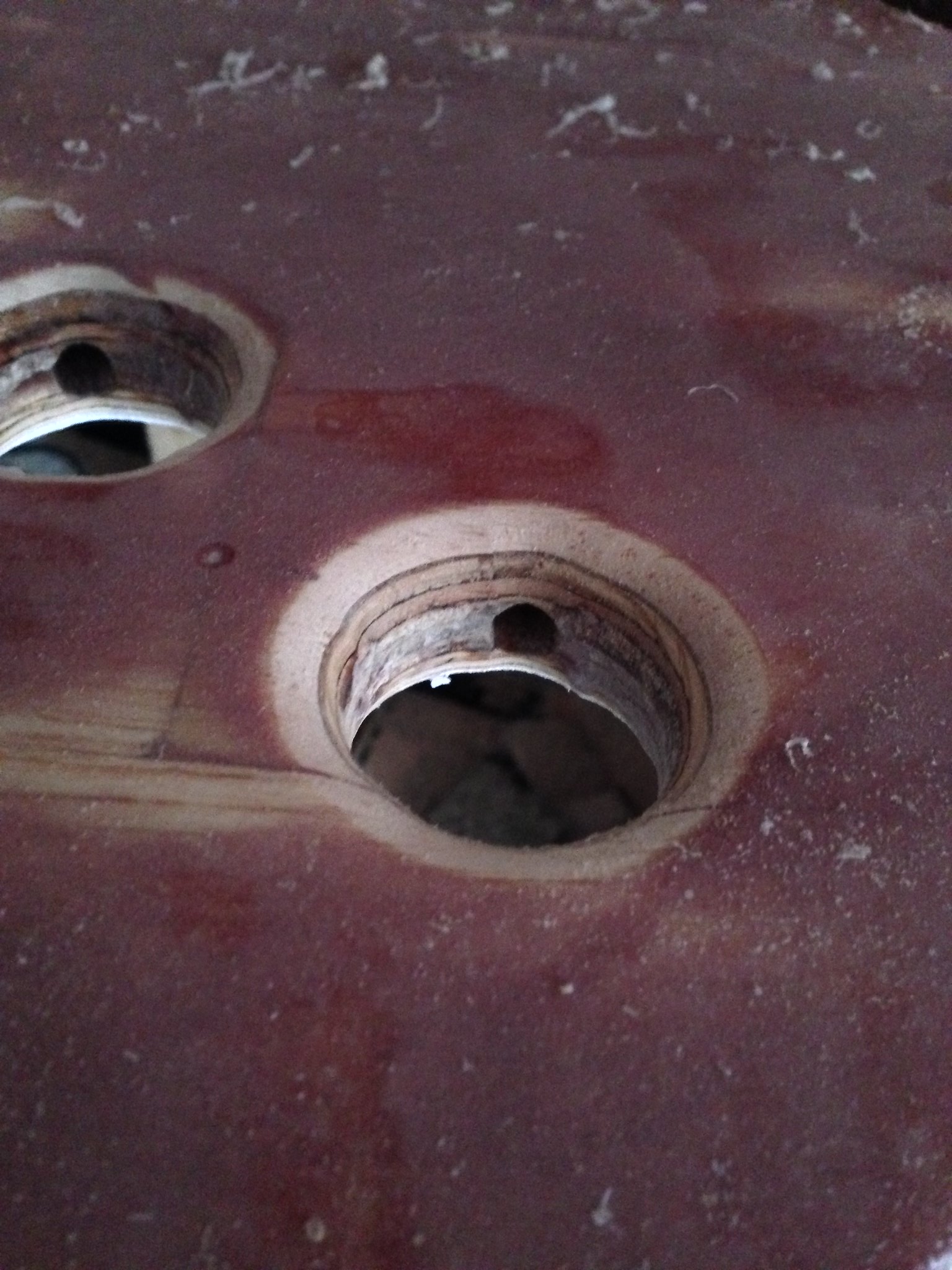 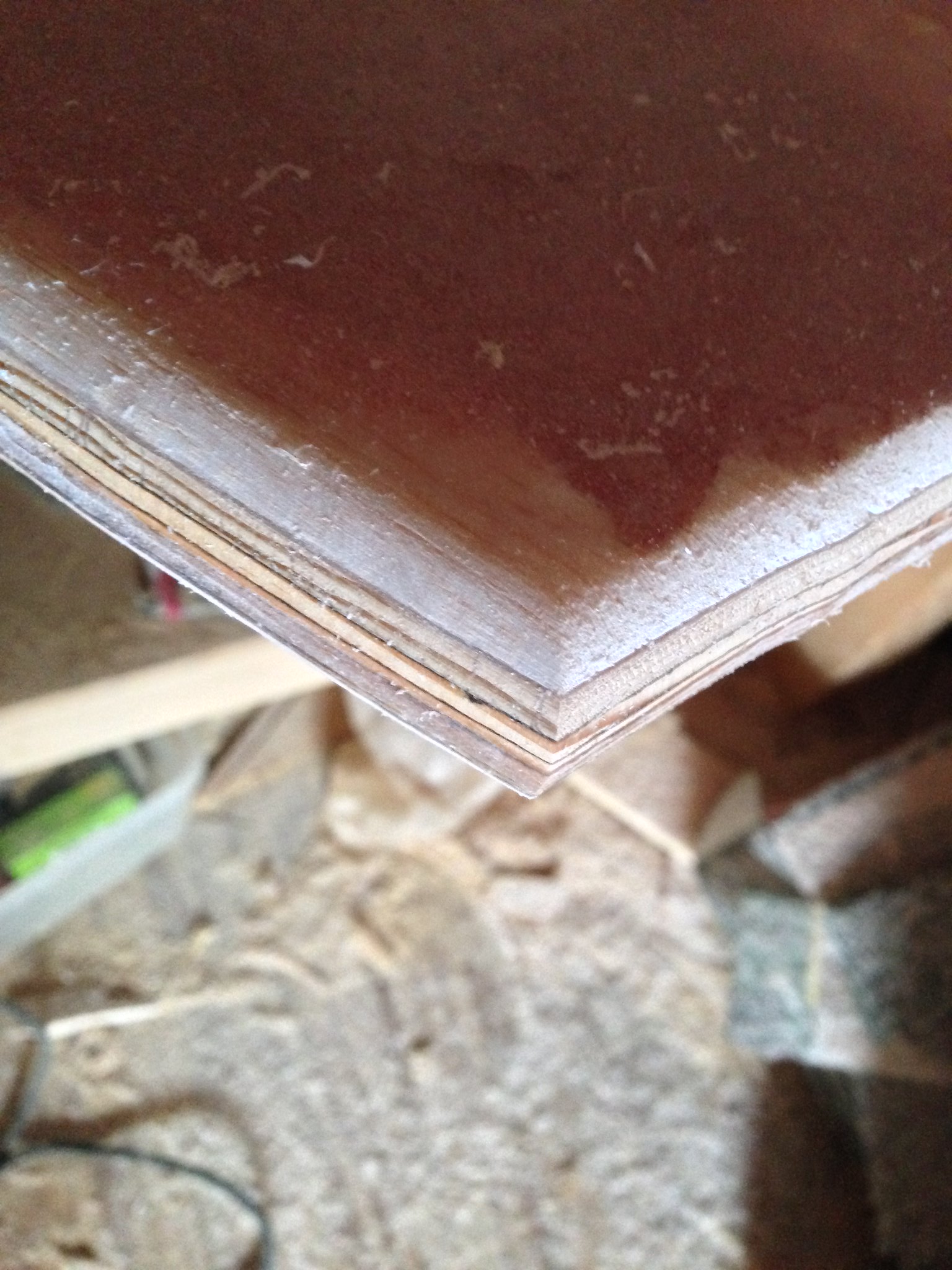 I filed down the bolt heads on the rudder stock and filled in the remaining spaces with thickened epoxy, and then started glassing… 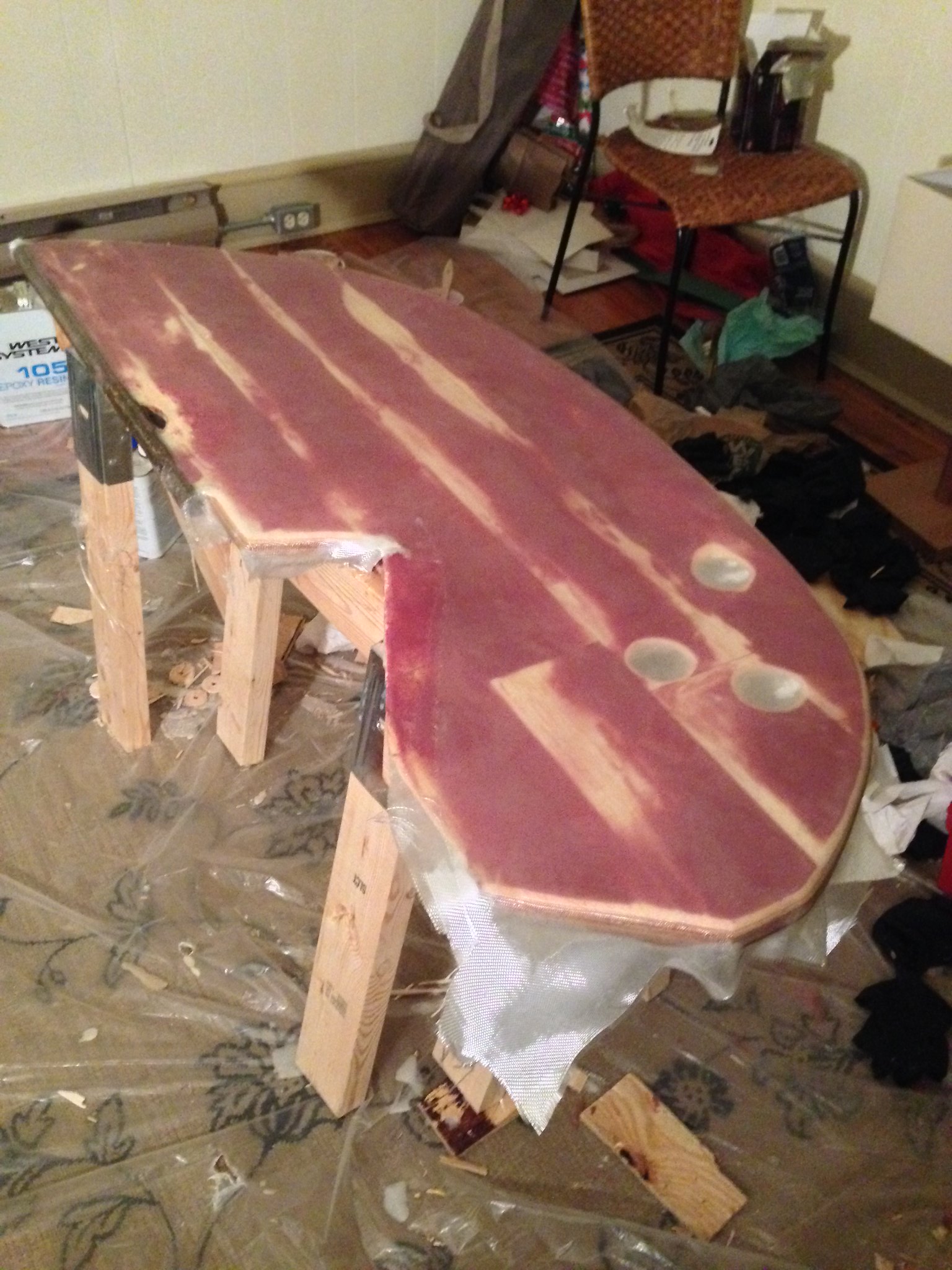 I’ve put down three layers on each side, all that’s left now is to glass in the recess for the rudder strap and a few other tricky spots. Once the weather warms up, we’ll attach the rudder to the boat, fill in the three access holes for the bolts, glass in the upper section of the rudder stock, slap a coat of paint on, and check it off the list. Soon! 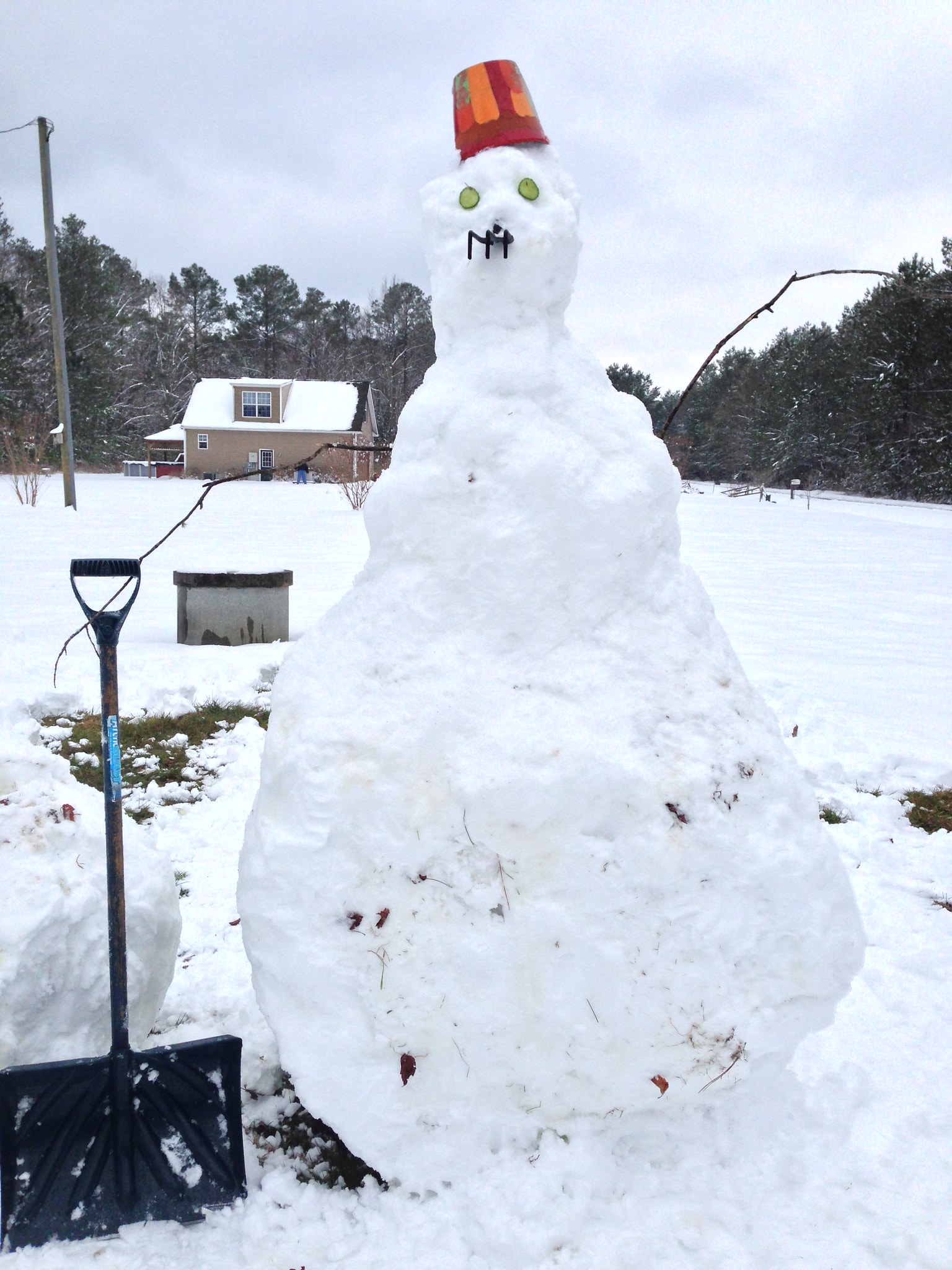